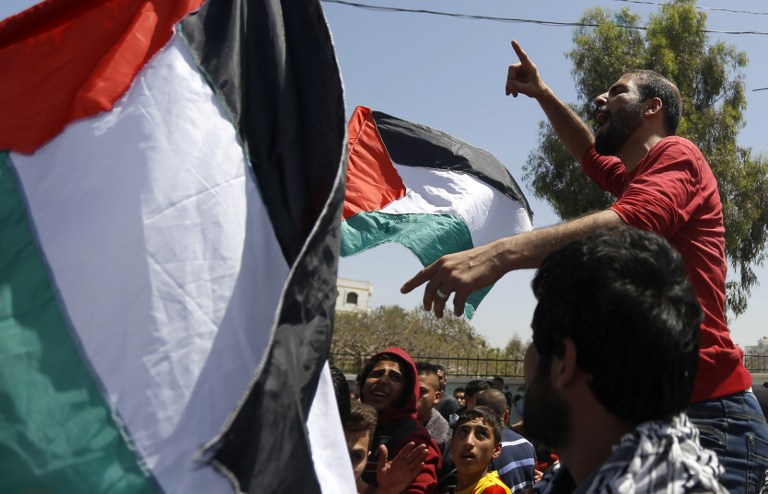 Palestinians chant slogans during a protest in Gaza City on April 29, 2015, organized by the Palestinian Youth Organization, calling for an end to political division.

GAZA - A Palestinian unity rally attended by hundreds in Gaza on Wednesday ended in scuffles that showed the depth of divisions delaying reconciliation and recovery from a devastating war.

Hamas Islamists, in control of Gaza since seizing the territory from the Western-backed Fatah movement in 2007, had given the green light for the gathering organised by university student groups with rival political affiliations.

The two rival factions have failed to agree on control of Gaza&39;s border crossings. That dispute has delayed the flow of vital reconstruction aid after last summer&39;s 50-day war with Israel as well as the allocation of government ministries and salary payments for Hamas-hired civil servants.

After violence broke out at Wednesday&39;s rally, in a Gaza neighbourhood badly damaged during battles in July and August, demonstrators and Hamas gave conflicting accounts of the fracas.

A Fatah loyalist accused Hamas of sending club-wielding men in civilian clothes into the crowd to attack rival student groups as uniformed police stood by. Several local journalists said they had also been assaulted by plain-clothed security men.

"We were chanting slogans calling for an end to the division, urging reconstruction, but Hamas accused us of trying to politicise the rally," the Fatah demonstrator said.

Eyad al-Bozom, spokesman of the Hamas-led Interior Ministry, said demonstrators had been fighting among themselves and police stepped in to separate them.

"As participants were leaving ... scuffles took place between them which forced the police to intervene in order to prevent an escalation and to preserve the lives of participants and public order. Calm has prevailed," Bozom said.

A pro-Hamas demonstrator said students supporting Fatah and other political factions had left the event angry over slogans demanding Abbas end security cooperation with Israel in the occupied West Bank.

"I sincerely hope the Palestinians will reengage themselves and promote the national reconciliation and (that) will contribute a lot to their negotiation with the Israelis to establish a two-state solution," he said.

Citing Abbas&39;s unity deal with Hamas, Israel last April broke off talks with him already deadlocked over issues that included Israeli settlement-building on occupied land Palestinian seek for a state.