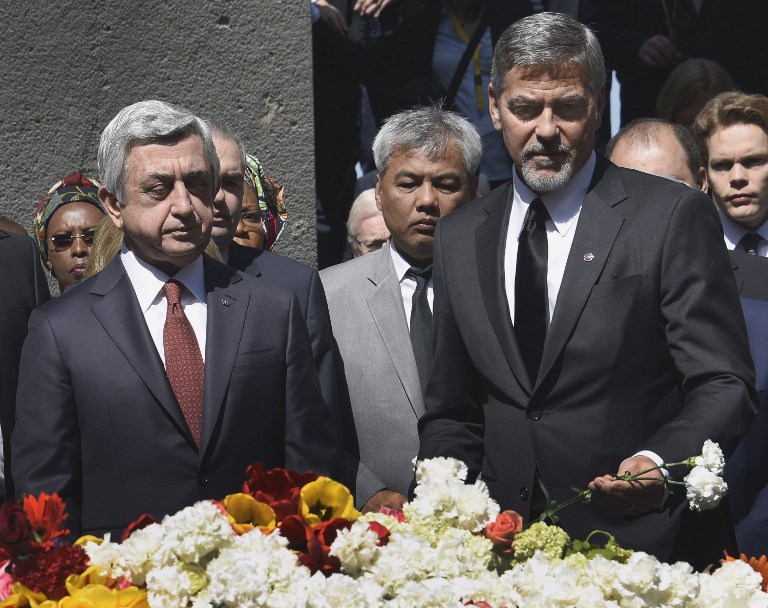 US actor George Clooney (R) and Armenian President Serzh Sarkisian lay flovers at the Genocide Memorial in Yerevan on April 24, 2016. Clooney marched with thousands of Armenians to a memorial to mark the 101st anniversary of the massacre.

YEREVAN, Armenia - Hollywood star and rights advocate George Clooney on Sunday led thousands of Armenians on a march to a hilltop memorial in Yerevan to commemorate the 101st anniversary of the World War I-era Armenian genocide.

A staunch advocate of the massacre&39;s recognition as genocide, Clooney arrived in the ex-Soviet nation on Saturday to take part in the hugely symbolic ceremonies.

Clooney and the French singer of Armenian origin Charles Aznavour joined President Serzh Sarkisian and thousands of Armenians to lay flowers at the eternal flame at the imposing Tsitsernakaberd memorial as requiem services for the victims were held in churches across the country.

Armenians say up to 1.5 million people were killed during World War I as the Ottoman Empire was falling apart, a claim supported by many other countries.

Turkey fiercely rejects the genocide label, arguing that 300,000 to 500,000 Armenians and at least as many Turks died in civil strife when Armenians rose up against their Ottoman rulers and sided with invading Russian troops.

Clooney co-chairs the selection committee of the Aurora Prize for Awakening Humanity which was established on behalf of the survivors.

The Hollywood heavyweight will name an inaugural recipient of the Aurora Prize during an award ceremony in the city later Sunday.

The laureate will be given a $100,000 grant and will nominate organisations to receive a $1 million award.

"Today, we commemorate the sacred memory of the victims of the Armenian genocide," Sarkisian said in a statement.

Among the mourners at the Tsitsernakaberd memorial was Samvel Balayan, a 63-year-old retired biology teacher, who said that "101 years on, Turkey had not renounced its plans to exterminate Armenians."

"Turkish leaders are constantly making anti-Armenian statements and are helping our enemy Azerbaijan."

Late Saturday more than 14,000 people held a torch-lit march through central Yerevan, where a group of activists from nationalist Dashnaktsutyun party burnt Turkish and Azerbaijani flags.

Over a century after the mass killings, tensions still run high between Yerevan and Ankara which supports Armenia&39;s foe Azerbaijan in the Caucasus neighbours&39; conflict over the control of the disputed Nagorny Karabakh region.

Earlier this month, fierce clashes between Azerbaijani and Armenian forces in Karabakh claimed the lives of more than 100 people from all sides.

The worst clashes in decades in the separatist region erupted on April 2 and ended days later with a Russian-mediated ceasefire.

The outbreak of violence sparked fears of a wider conflict that could drag in regional powers Russia and Turkey.

Moscow and Ankara have been at loggerheads since Turkey shot down a Russian warplane in Syria in November.

Turkish President Recep Tayyip Erdogan has said that "Karabakh will one day return to its original owner," while his prime minister, Ahmet Davutoglu, vowed to stand by Baku "until the apocalypse."

Moscow -- which has sold arms to both Armenia and Azerbaijan but has much closer ties to Yerevan where it has a military base -- has denounced the comments as "unacceptable."

In a war in the 1990s that claimed some 30,000 lives, separatists backed by Yerevan seized control of the mountainous region inside Azerbaijan that is home to the ethnic Armenian majority.

Azerbaijan and Armenia have not signed a peace deal despite a 1994 ceasefire and sporadic violence on the line of contact regularly claims the lives of soldiers on both sides.

The fragile ceasefire is largely observed but on Sunday Azerbaijan claimed it had destroyed an Armenian tank and its crew and accused Yerevan of shelling Azerbaijani villages using heavy artillery.