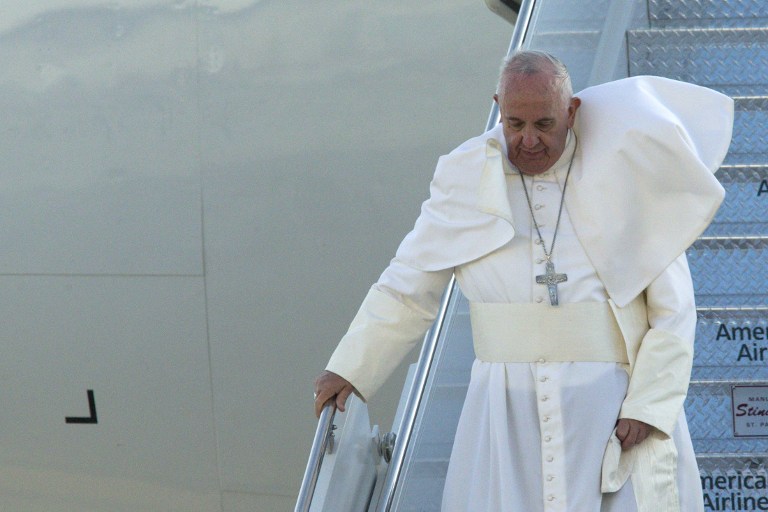 PHILADELPHIA - Pope Francis confronted the sexual abuse of children by Roman Catholic clergy on the final day of his United States visit on Sunday.

He met with five adults abused as minors and vowed to hold responsible those involved in the crimes and cover-ups.

"I have in my heart the stories of suffering and the pain of the minors who were sexually abused by priests," the 78-year-old Argentine pope told bishops in Philadelphia after meeting privately with the victims, three woman and two men.

This disgrace keeps burdening me, that the people who had the responsibility of caring for these tender ones raped them and caused them great pain. God weeps for the sexual abuse of children.

The pope used what might be his strongest language yet in condemning the sexual abuse and promising to punish those responsible.

The meeting marked the second time in his 2-1/2 year papacy that Francis has met victims of clergy sexual abuse and was the first such encounter on a foreign tour. He previously met with victims at the Vatican.

Of the three US cities he visited, Philadelphia, has been the most publicly scarred in the US clergy abuse scandal.

The pope also met prisoners at an inner-city jail before celebrating Mass for an expected crowd of 1.5 million people. At the end of the sixth day of his trip, which followed a stop in Cuba, Francis is due to return to Rome.

Addressing the bishops, Francis said he was committed to ensuring that children are protected from sexual abuse "and that all responsible will be held accountable."

"I am profoundly sorry that your innocence was violated by those who you trusted," the leader of the world&39;s 1.2 billion-member Catholic Church told the victims, according to a transcript provided by the United States Conference of Catholic Bishops.

"For those who were abused by a member of the clergy, I am deeply sorry for the times when you or your family spoke out to report the abuse, but you were not heard or believed. Please know that the Holy Father heard you and believes you," the pope added.

Vatican spokesperson Federico Lombardi said "two or three" of five victims with whom the pope met were abused by priests or Catholic educators, with the others abused by a family member or non-Catholic teacher.

The scandal over clergy sexual abuse of children and cover-ups by senior members of the Church has been damaging to the Catholic Church worldwide, eroding its moral authority and requiring costly legal settlements.

Reports that priests had sexually abused children and bishops had covered up their actions emerged in 2002 in the United States and in other countries several years later.

Lombardi said the Vatican had not yet firmed up what discipline bishops who helped cover up abuse would face.

Victims&39; groups say the Church has not done enough. As many as 100,000 US children may have been the victims of clerical sex abuse, insurance experts said in a paper presented at a Vatican conference in 2012.

The Archdiocese of Philadelphia has been the subject of multiple damaging grand jury reports relating to the abuse scandal, which by the Church&39;s own estimate has involved 6,400 clergy credibly accused between 1950 and 2013 nationwide.

Twelve US dioceses have filed for bankruptcy in part due to hefty settlements, more than $3 billion nationwide, paid out to victims.

The pope&39;s milder comments on the scandal earlier in the trip, when he did not utter the words "sexual abuse" and talked about the pain the Church had faced in managing the scandal, had angered victims.

Clergy sex abuse victims and their advocates welcomed his more direct approach on Sunday but expressed skepticism that they would lead to change.

"The significant aspect of his words today is that he promised that all responsible will be held accountable. Now the test of his resolve will be whether he follows through," said Anne Barrett Doyle, co-director of BishopAccountability.org, a private group tracking the sexual abuse scandal.

Mark Rozzi, a Pennsylvania state legislator who was raped by his parish priest as a young teen, said he welcomed the pope&39;s change in tone.

"They were powerful words. Now we have to put those words into real action," said Rozzi, who has introduced legislation that would make it easier for people who had been sexually abused as children to sue the Church. The bishops&39; lobbying arm has opposed such legislation.

The pope met with 71 prisoners - 60 men and 11 women - who were among the approximately 2,800 inmates at Curran Fromhold Correctional Facility, a drab compound in Philadelphia&39;s northeastern outskirts with barbed wire topping its outer walls.

The pope, an outspoken opponent of the death penalty and lengthy prison terms, sat in a wooden chair fashioned by the inmates and told them that "confinement is not the same thing as exclusion" from society.

He then walked around to speak individually with each of the blue-uniformed inmates, placing his hand on their foreheads, shaking hands and hugging some who stood to greet him.