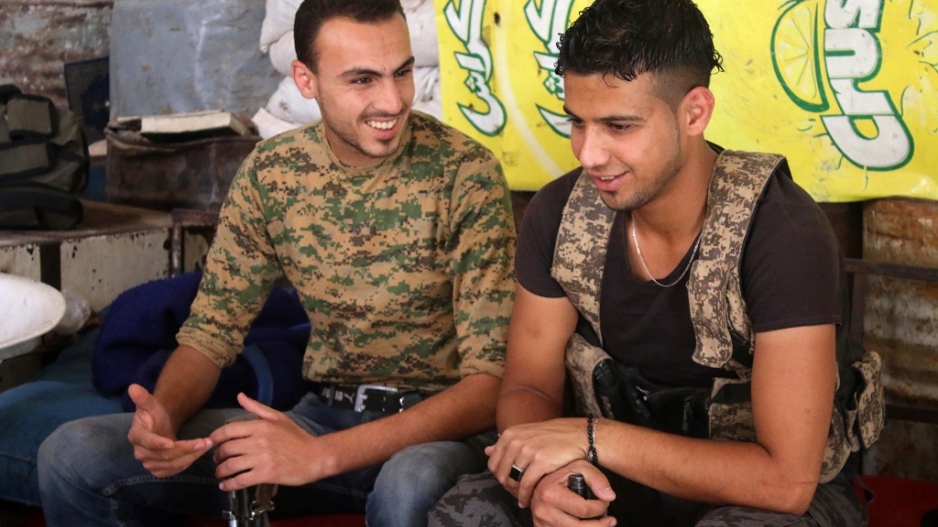 Moawiya Sayasina, right, the Syrian activist who started scribbling anti-Assad slogans in 2011, and a comrade sit in a position fortified with sandbags near the frontline in a rebel-held neighbourhood in the southern Syrian city of Daraa on June 5, 2018.

DARAA, Syria - "Your turn, Doctor." Seven years after scribbling the anti-Assad slogan that sparked Syria&39;s war, activists-turned-rebels Moawiya and Samer Sayasina are bracing for a regime assault on their hometown of Daraa.

They were just 15 when they and friends, inspired by the Arab Spring revolutions they saw on television, daubed a groundbreaking message on one of the southern city&39;s walls in the spring of 2011.

"We got a can of spray paint and we wrote &39;Freedom. Down with the regime. Your turn, Doctor&39;," referring to President Bashar al-Assad, a trained ophthalmologist.

Within two days, security forces stormed their homes and detained the boys, who are unrelated but share a common family name.

"They tortured us to find out who had provoked us to write it," Moawiya said.

The teenagers&39; detention prompted a wave of angry protests demanding their release, in what many point to as the spark to Syria&39;s nationwide uprising.

READ: Numbers of displaced in Syria in 2018 approaching one million: UN

The words that sparked the revolution more than seven years ago are no longer visible today, covered up under a coat of black paint.

Samer, also now 23, remembers emerging from detention in March 2011 to find his whole country in uproar against the government.

"We were in jail for about a month and 10 days. When we got out, we saw protests in Daraa and all over Syria," he said.

Violently smothered, the demonstrations evolved into a conflict that has since killed more than 350,000 people and thrown millions out of their homes.

"In the beginning, I was proud of being the reason for the revolution against oppression. But with all the killing, the displacement and the homelessness over the years, sometimes I feel guilty," said Samer.

"Those people who died or fled, all this destruction -- it all happened because of us."

During the first months of protests, security forces rounded up dozens of people in Daraa, including 13-year-old Hamza al-Khatib.

After he was tortured to death, according to his family, he became one of the early symbols of the Damascus regime&39;s brutal repression.

READ: Explainer: the Syrian war in one short, easy read

With protests melting into civil war and rebels seizing territory, Moawiya and Samer took up arms in 2013.

But the rebel movement has since fragmented and suffered a string of devastating blows, with the regime with Russian support retaking more than half the country.

Last month, the army regained full control of Damascus for the first time since 2012, and Assad has now turned to the cradle of the uprising against him.

But the young men who first demanded that he step down remain determined to fight, as they once wrote, until the regime falls.

"Assad&39;s regime may have weapons, but so do we. The only difference is he has warplanes and we have God Almighty."

He refuses any settlement for Daraa like those that have preceded it for the armed opposition to evacuate other parts of Syria.

Going out on patrol, Moawiya swapped his civilian clothes for grey military-style trousers and a black sweater.

He moved between destroyed buildings with just sandals on his feet, a Kalashnikov in his hand and his eye trained on the horizon for any movement.

Moawiya and Samer lost many friends to the war, including classmates from school who became their cellmates in jail.

"We were a group of young guys," recalled Samer.

"Some are dead now. Some fled. Some are still fighting," he said, counting off friends who died in clashes in 2015 or subsequent bombing raids on Daraa.

Moawiya too struck a nostalgic tone.

"We grew up on revolution, on weapons and on fighting. We started to lose friends, to bury them with our own hands. We grew up on war and destruction," he said.

"When I get married and have a son, I&39;ll tell him what happened to me. I&39;ll teach him to write on the wall whenever he sees injustice -- not to be afraid of anyone, and to write it all."