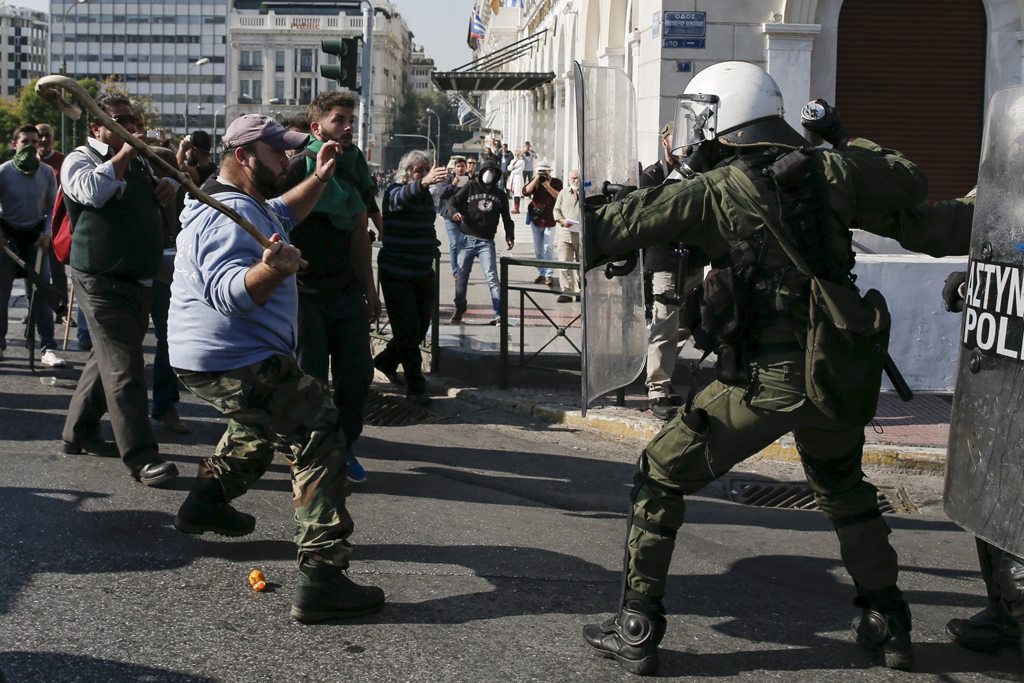 A farmer clashes with a riot police officer during a demonstration in Athens, Greece November 18, 2015. Police fired tear gas when dozens of farmers pelted them with oranges and tried to storm parliament during a protest against planned tax increases.

GREECE - Thousands of Greek farmers demonstrated on Wednesday in Athens against tax hikes in a protest marked by scuffles with police.

Some 6,000 farmers gathered on central Syntagma Square according to police, who fired tear gas when a group of them tried to enter parliament.

The protesters then threw oranges and plastic bottles at them.

Most demonstrators were from the island of Crete, a main area of Greece&39;s agricultural production.

"We are protesting against tax increases that will lead to the gradual disappearance of the agricultural sector," Manolis Lambrakis, a 22-year-old farmer from Crete, told AFP.

"It&39;s quite simple, our children will walk away," said a middle aged farmer named Grigoris, who sported a baby lamb named Alexis on his shoulder.

"We voted for the other Alexis and are not ashamed to say so," he told reporters, referring to Prime Minister Alexis Tsipras.

Contrary to promises to eliminate austerity, Tsipras&39; leftist government has committed to additional tax hikes and income cuts in return for a 86-billion-euro ($93-billion) bailout agreed in July.

Among them is the pledge to scrap farmer benefits such as income tax breaks and cheaper fuel.

In addition, the income tax rate for farmers is to progressively double to 26 percent from 13 percent currently and their pension contributions will rise.

After talks this week to unblock some 12 billion euros from the bailout, Athens also revealed plans to slap a new tax on wine, one of Greece&39;s top exports.

"This tax will increase the circulation of unlicensed wine to the detriment of organised wineries that create jobs and pay taxes," said the association of producers in Nemea in the Peloponnese, one of the main areas of viniculture in Greece.