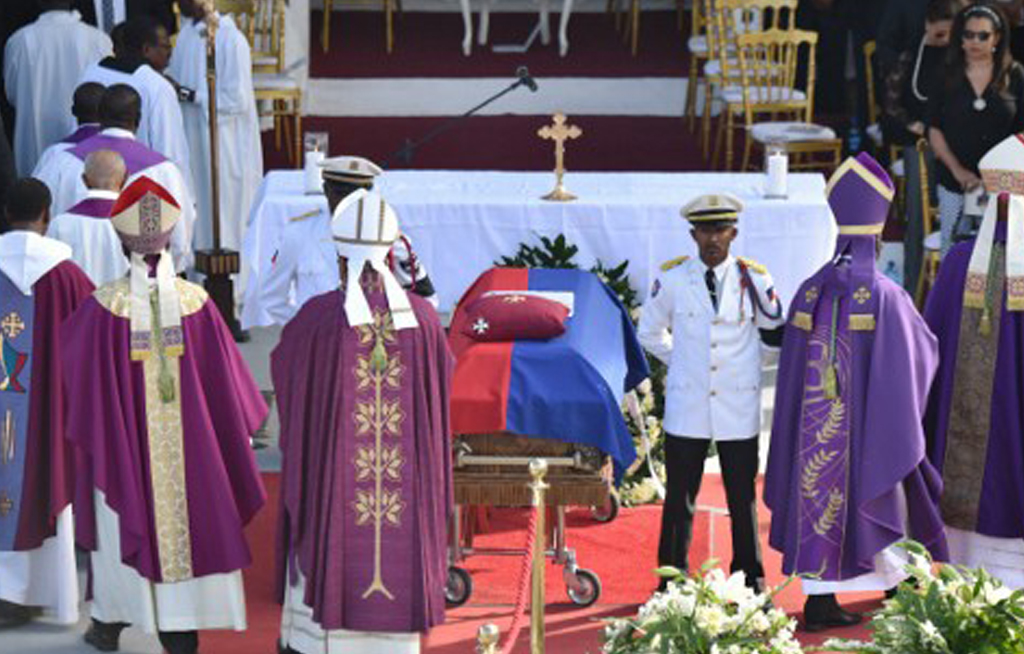 Police Officers from the National Palace stand next to the casket of former Haitian president Rene Preval during the State Funeral at the kioske Occide Jeanty, in Port-au-Prince, on March 11, 2017.

In two hours of religious and civil ceremonies, bishops and family members remembered the soft-spoken former agronomist as a man of simplicity who held the country's farmers in high regard.

"Many people have said that my father did not like to speak too much. In effect, that is true," said Patricia Preval, his diminutive daughter.

Rene Preval, who died last Friday, had an understated style, a marked contrast to the fiery oration of his one-time friend, former President Jean-Bertrand Aristide, or the showmanship of his final successor, Michel Martelly.

Preval will be best remembered internationally for leading Haiti in the immediate aftermath of a 7.0-magnitude earthquake that killed at least 200,000 people.

His daughter also said that, despite serving as a prime minister and later a popular two-time president, politics did not even interest him.

"Politics was a means to development, (that) was what he loved," she said during a speech in which her voice occasionally cracked with emotion.

Yet local politics were not completely absent from the funeral, in which Preval's casket stood in the center of a stage draped in Haiti's blue and red flag.

Current President Jovenel Moise's speech at the end of the service was met with jeers, as some said it resembled more a campaign speech than a eulogy.

Preval's body will be buried on Saturday afternoon in his hometown, Marmelade, in the north of the country.

"He wasn't a bad president... he wasn't a liar," Anna Lamartiniere, 64, said in the stands before the service. "He did good work for the country, he built roads."