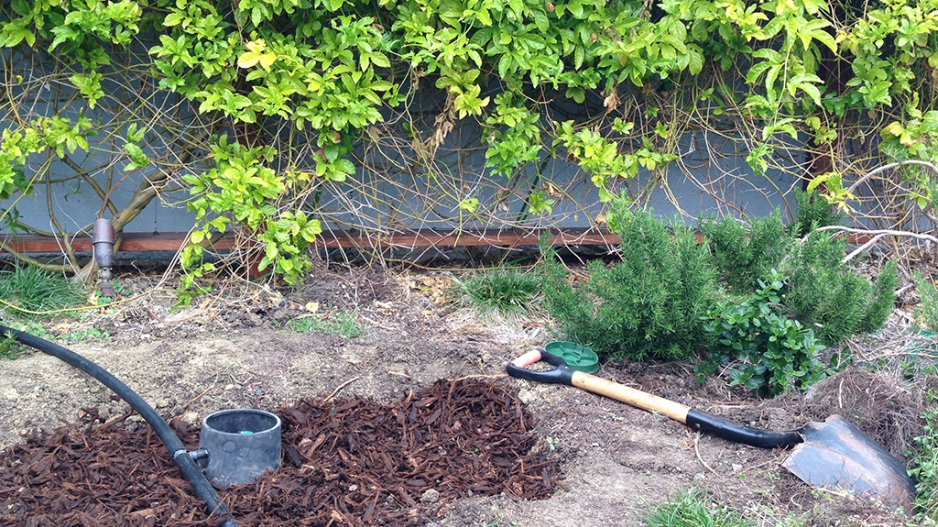 A basin that receives waste water from the washing machine and irrigates the granadilla vine growing above.

SAN DIEGO - It’s spring in the United States and the hills on the eastern outskirts of San Diego have already turned brown.

It’s been incredibly dry here for the last five years.

Warmer temperatures have intensified the impact of the drought and increased the risk of wildfires, a terrifying prospect for people living here who stand to lose their homes.

The county borders Mexico and is home to about three million people.

File: A map which helps residents of San Diego county see if they live in a fire risk area. Courtesy Ready San Diego.

At Iron Mountain trailhead, about a 30 minute drive inland, fire warning signs are posted at the entrance. No smoking is allowed.

A dried out stream at Iron mountain in Southern California drought eNCAeco pic.twitter.com/0z8T1DynHG

“In 2003 and 2007, San Diego almost burnt down. It keeps getting hotter and the fire season is getting longer and longer,” said resident Dawn Orange.

According to the Guardian newspaper, recent figures show that April 2016 is the hottest April on record around the world, making it the third month in a row to smash record temperatures.

Figures released by Nasa over the weekend show the global temperature of land and sea was 1.11C warmer in April than the average temperature for April during the period 1951-1980,” notes the Guardian report.

This April was the hottest on record and by the largest margin according to NASA data. climatechange pic.twitter.com/h6AOfpKA1N

Authorities have introduced a number of measures to meet California&39;s target of a 25-percent reduction in urban water use.

Some residents have taken out their front lawns to reduce urban water use.

In the city of Poway, the front lawns feature a variety of drought-resistant landscaping.

It may look like grass but it&39;s AstroTurf. Front lawns are removed in San Diego to conserve water drought eNCAeco pic.twitter.com/AIfQuQm7XE

In Encinatas, about a thirty minute drive from Poway, one family has removed their front lawn and replaced it with a food forest.

“One of our hopes from right in the beginning was to have a garden where the children knew what everything was and what they could eat and couldn’t eat,” said Dennis Kim.

To conserve water, they have installed a laundry to landscape system, which uses basic plumbing parts.

PHOTO: A valve which helps residents control the outflow of waste water from the washing machine and send it out to the garden. eNCA/Bianca Ackroyd

Eco-friendly detergent is used in the machine and the wastewater is pumped into the garden.

The greywater system was installed in 3 hours. Watch water from the washing machine going into the garden eNCAeco pic.twitter.com/JqQ50NNBLM

The flow is controlled with small taps, allowing some plants to receive more water than others.

“I feel like the idea that our water goes twice, firstly it cleans our clothes and secondly it feeds our plants and gives us food, so it’s not wasteful,” said Jacqueline Kim.

Sarson works with the San Diego Sustainable Living Institute and trains and installs rainwater and grey water systems in the county.

She says community workshops are a useful way to spread awareness of simple ways to conserve water and adapt to the drought.

“I think the biggest obstacle to having the simplest things ripple out is lack of knowledge,’ she said.

“If we’re all locked in our houses we’re not exposed to this stuff, but if someone says hey come join me, come see how easy it is, then you have a few friends who do it, they realize wow that was so easy I’m going to tell my friends about it, it ripples out a lot quicker,” said Sarson.

Water treatment and reuse in homes can go a long way to reducing the demand on county authorities to treat water said Sarson.

The 39-year-old mother of two boys studied mathematics and electrical engineering and left her work in that field eight years ago after she had a “shift in reality”.

“You start to ask yourself what does it mean to create something that will last for my kids, that’s not money in the bank,” she said.

“It’s leaving something lasting for the future,” said Sarson.