Homs accord on rebel pullout as Syria army advances 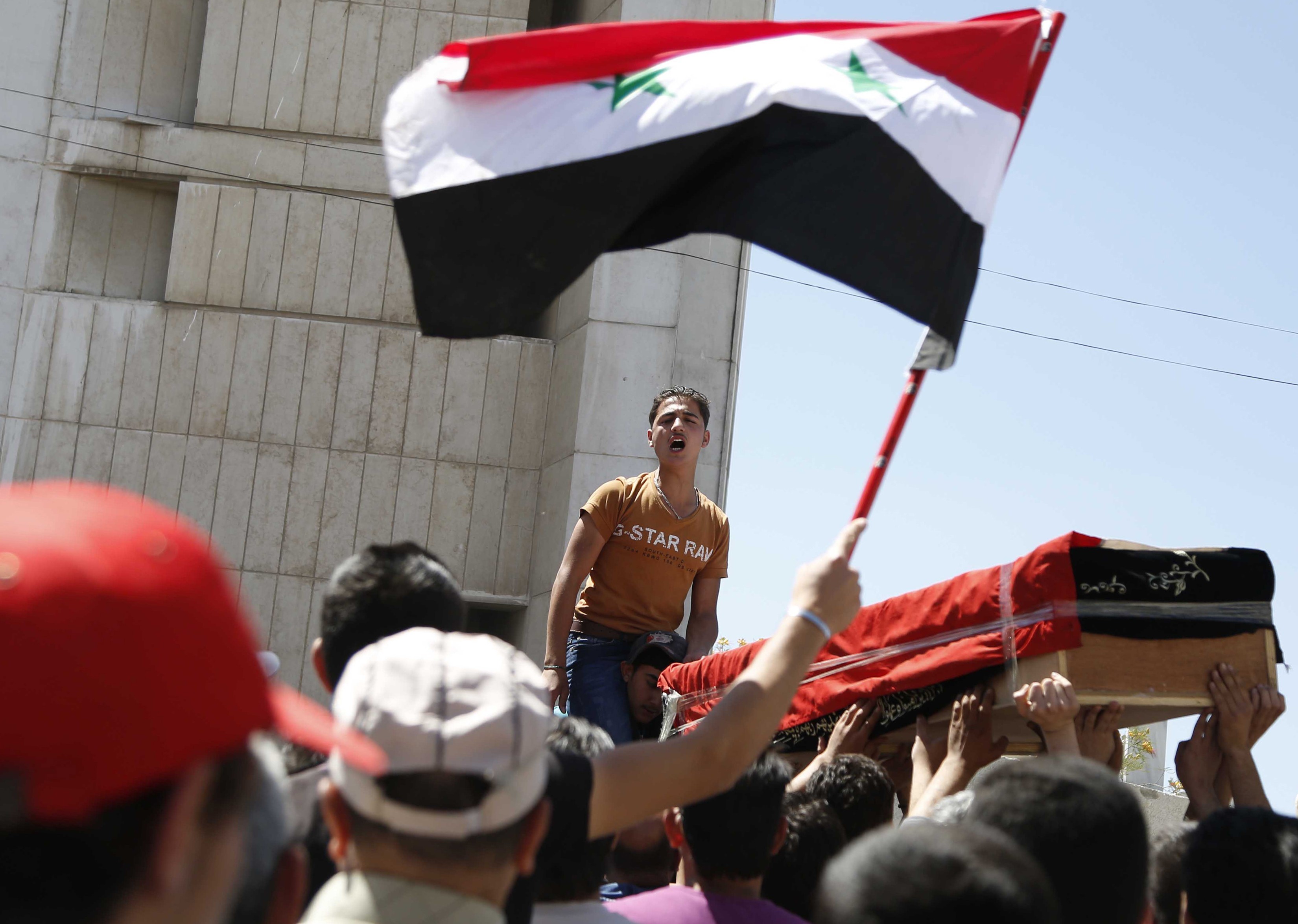 Mourners chant slogans and carry the coffin of one of the victims killed in mortar shells that struck the Badr el-Din Hussaini complex in the mainly Shi'ite Muslim district of Shaghour in central Damascus during their funeral on April 30, 2014.

DAMASCUS - Rebels said on Sunday they had struck a deal to withdraw from the army-besieged heart of Homs city, as government forces advanced on a strategic town near the Syrian capital, a month before elections.
The deal over the Old City of Homs, under total blockade since June 2012, will see some 2,250 people, mostly fighters, evacuate the flashpoint city in central Syria.
Rebels will head to opposition-held areas in the north of Homs province, handing over control to the army, opposition sources told AFP.
The deal brought together -- for the first time -- representatives of President Bashar al-Assad&39;s security forces, the rebels and Damascus backer Iran.
Homs was dubbed the "capital of the revolution" at the start of the anti-Assad uprising in 2011, and it has seen some of the heaviest violence in Syria&39;s war.
According to the opposition, the deal includes the exchange of an unknown number of Iranian and Lebanese prisoners currently held by the Islamic Front, Syria&39;s largest rebel alliance.
"An agreement occurred between representatives of the rebels and the chiefs of security, in the presence of the Iranian ambassador, for the pullout of fighters from the Old City," said rebel negotiator Abul Hareth al-Khalidi.
He said the talk had now moved onto the implementation phase.
Also under the deal, a copy of which was obtained by AFP, relief will be allowed into two Shiite, pro-regime towns in the northern province of Aleppo that are under siege by rebels.
The text specifies that the evacuees will be escorted by UN and Iranian embassy representatives, as "guarantors" of their safety.
But regime representatives said it was an "arrangement" rather than a deal.
"There is no deal, there is an arrangement and reconciliations that should lead to the handing over of the city, stripped empty of weapons and of armed men," said Homs governor Talal al-Barazi.
"On the ground there is nothing yet," he said.
The main opposition National Coalition, for its part, issued a statement in praise of "the heroic actions of the revolutionaries" in Homs.
The group also called on the United Nations "to fulfil its duty and to ensure the regime honours the truce" which began on Friday.
An activist from Homs told AFP: "Today, the modus operandi of the withdrawal was put in place. But there will be fear from both sides until the exit takes place."
Army advance
The army made major advances Sunday on Mleiha, a town strategically located southeast of Damascus near the airport road, a security official said.
"More than half of the town is under army control," the official told AFP, on condition of anonymity.
The Syrian Observatory for Human Rights also reported the advance, saying that Lebanon&39;s Shiite movement Hezbollah was playing a "lead role" in the battle.
Like the rest of the Eastern Ghouta area, Mleiha has been besieged for the past year and under fierce bombardment for several weeks.
The advance and agreed rebel pullout from Homs come a month ahead of a presidential election in which Assad is poised to return to power.
On Sunday, the constitutional court announced it had accepted the bids of two challengers for Assad&39;s seat: Maher Abdel Hafiz Hajjar and Hassan Abdallah al-Nuri.
Neither contender is known to the Syrian public.
While the June 3 election will be the country&39;s first multi-candidate vote, the rules effectively rule out any serious opponents to Assad&39;s regime from running.
Among them is the stipulation that anyone who has lived outside Syria in the past decade is excluded, effectively barring most prominent opposition figures, who live in exile.
At the same time, the vote will only be held in areas under government control.
The election is being held amid a brutal civil war that has killed more than 150,000 people since March 2011 and made millions homeless.
In neighbouring Jordan on Sunday, the UN refugee agency rebuked donors for not doing enough to help the millions of Syrian refugees and the countries hosting them, saying the crisis demanded "massive support."
"This enormous impact is not being fully recognised by the international community," UN High Commissioner for Refugees Antonio Guterres said at a meeting of senior officials from Egypt, Jordan, Iraq, Lebanon and Turkey.
"Let me be very clear, there has been very little support," he said at the Zaatari refugee camp in northern Jordan, which is home to more than 100,000 Syrians.