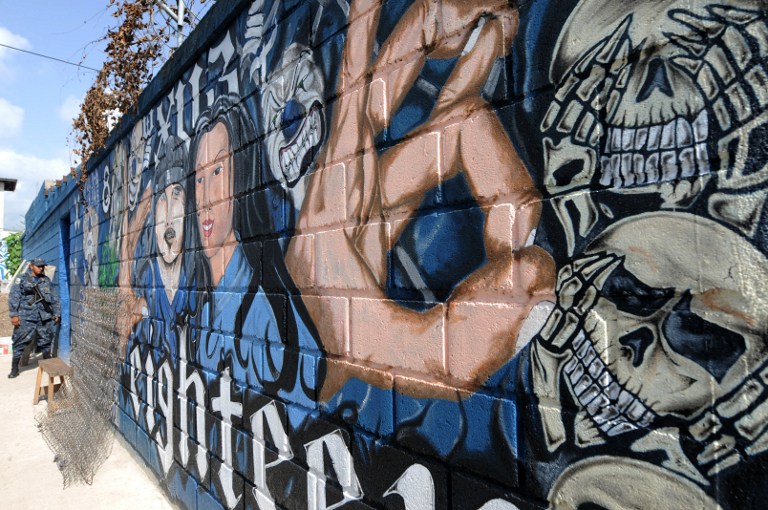 Murals made by members of the Mara 18 youth gang at the national penitentiary in Tamara, north of Tegucigalpa, Honduras on August 6, 2013. 17 murders of youngsters and children, some for not wanting to join gangs, hit the country in May 2014.

TEGUCIGALPA, Honduras  - The cry of the grandmother was gut-wrenching as she watched the burial of her grandson, the second killed in just days in a horrific wave of violence against children in Honduras.

Kids, even very young kids, are often killed if they refuse to join powerful street gangs, a scourge plaguing the poor Central American nation reputed to be the world&39;s most violent place.

The wave of murders is one of the most pressing problems facing the new government of President Juan Orlando Hernandez.

This second grandson was only seven years old. He was shot and tortured, his body found wrapped in a sheet and dumped in a vacant lot in San Pedro Sula, north of the capital, Tegucigalpa.

The grandmother and the mother of the child were already in shock after the death three days earlier of another of their children, aged 13, in similarly grisly circumstances.

In the space of a month, six more school-age children were murdered in San Pedro Sula, and authorities say the reason was the same -- they had refused to join a street gang.

In an interview with the newspaper El Heraldo, Hernandez said the killings could be a backlash against his government&39;s security policy.

"I pray to God that it is not true that this issue of the children is a response to what we have been doing," he was quoted as saying.

That same day, farther north in the town of Limon, a man stabbed a 13-year-old girl to death, and also killed her siblings aged 10, seven and two.

The heart-breaking scene of the grieving grandmother consumed with pain was broadcast on television.

Honduras has the world&39;s highest homicide rate, 79 per 100,000 inhabitants, according to the Violence Observatory at the National University, but the latest news has shocked the country.

The deaths have unleashed criticisms of the government&39;s military-led security policy. Hernandez launched this iron-fisted approach to crime after taking power on January 27.

The president has said the country is already starting to see a change, with fewer murders. But human rights groups dispute this.

An average of 86 children and youths under the age of 23 have been killed per month since January 27.

That is 6.2 percent more than under the previous government, says Casa Alianza, an NGO that works to protect children.

Guadalupe Ruelas, director of Casa Alianza, told AFP there is "suspicion that there is a pattern of social cleansing" in which government authorities might be involved.

Furthermore, many minors are forced by gangs to collect extortion payments and killed if they refuse.

Bertha Oliva, coordinator of Committee of Relatives of Missing Detainees, said the new leader&39;s first 100 days had been "shaped by the killing of children."

But Hernandez rejects the criticism.

"Criminals now know they are surrounded, they know there is little they can do, they know that many of their bosses are being captured," he said. "If there are consequences, we will face them."

As soon as he took power Hernandez sent thousands of police and soldiers to areas controlled by gangs and drug traffickers. He blocked cell phone coverage from jails from which criminals operate.

Then he created "Guardians of the Homeland", a program in which children receive training in values to keep them away from the street gangs.

It aims to educate 100,000 youths in a year but it has been criticized for having an overly militaristic approach.

Several days ago in Tegucigalpa, the UN&39;s special rapporteur for crimes against children, Najat Maalla M&39;jid, urged the government to adopt urgent measures.

Sociologist Eugenio Sosa says Hernandez wants to show he is "making an effort" and people are giving him the benefit of the doubt so far.

But, he warned: "The death of children is causing great impact in society.

"The facts make it necessary to review that military strategy, mainly because children and youths are involved," said Mirna Flores, head of the sociology department at the National University.

Even for a country like Honduras that is so accustomed to bloodshed, she said, "what is happening is very serious."