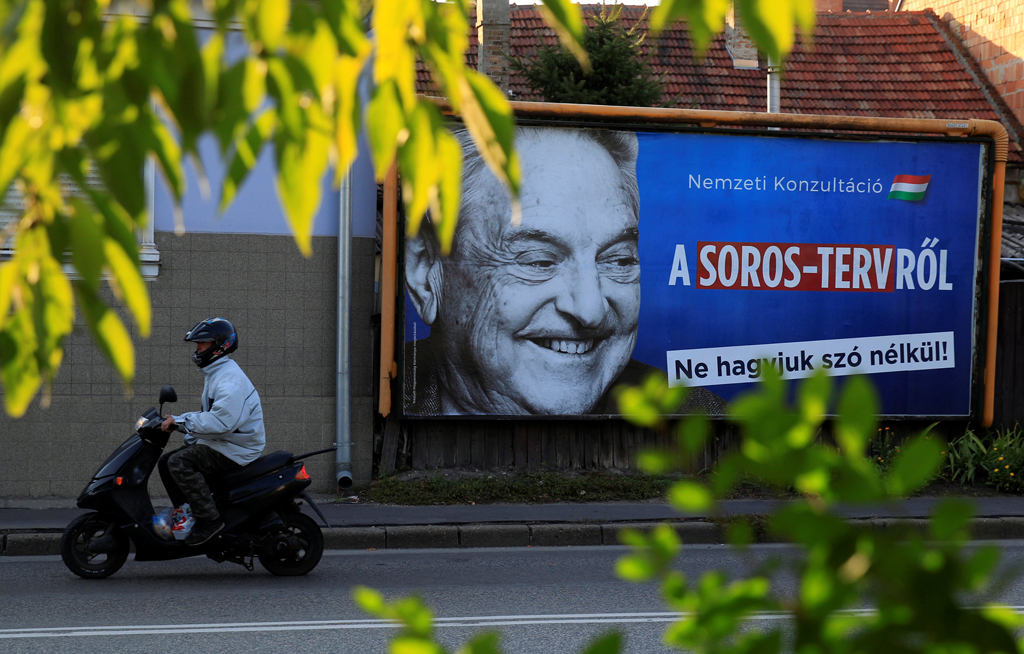 A government billboard displaying George Soros in monochrome next to a message urging Hungarians to take part in a national consultation about what it calls a plan by the Hungarian-born financier to settle a million migrants in Europe per year.

BUDAPEST - Hungary said Friday it plans to give a prestigious university founded by US billionaire George Soros a further year to comply with a controversial new law widely seen as targeting the institution.

The law, fast-tracked through parliament in April, requires foreign colleges and universities to operate on the basis of an intergovernmental agreement between Hungary and the home country and to also have a campus in that country.

The government denies targeting the CEU, an English-language institution founded by Soros in 1991 that now attracts students from 117 countries, and says it merely wants to remove advantages enjoyed by some foreign-based institutions.

"The deadline for compliance with the law will be extended from the current January 2018 to January 2019," if a proposal submitted to parliament today is passed, Justice Minister Laszlo Trocsanyi told reporters Friday.

An amendment to existing higher education legislation, the bill triggered large street protests in Budapest and international condemnation from Brussels to Washington, as well as from academics worldwide.

"Despite increasing -- but legally unfounded -- pressure from abroad, the government maintains its firm belief that Hungarian laws are binding on everyone, even the American CEU too," Trocsanyi said.

While Budapest has entered talks with New York, the CEU said earlier this month that it had signed a memorandum of understanding with the New York State-based Bard College "to provide educational activities" there.

The CEU said in a statement Friday that an agreement between the State of New York and Hungary "that guarantees CEU’s existence is ready for signature."

Friday's proposal was "a step backward" that "prolongs the uncertainty while walking away from a solution that lies at hand," said the statement.

Set up to foster democratic values after the end of communism, the CEU has long been seen as a hostile and independent bastion of liberalism by Prime Minister Viktor Orban's right-wing government.

In recent months the fiercely anti-immigration leader has been intensifying his attacks on the Hungarian-born Soros, 87, accusing him of encouraging and even orchestrating mass migration into Europe.