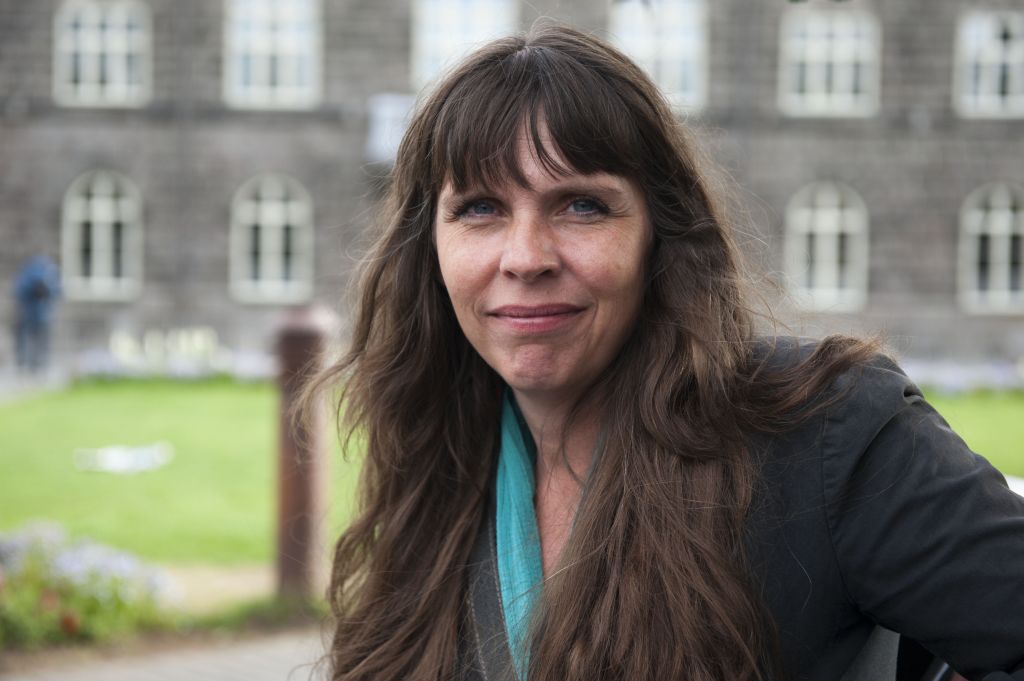 Icelandic parliament deputy Birgitta Jonsdottir poses during an interview near the Iceland's parliament building in Reykjavik on August 3, 2010.

REYKJAVIK, Iceland - The public face of the Icelandic Pirate Party, Birgitta Jonsdottir is a hacker, cyberspace anarchist, poet -- and a rather reluctant politician.

However, she could find herself strutting the corridors of power if the Pirate Party emerges as expected as the strongest group in Saturday's election in the North Atlantic island nation.

The hottest election to follow this week: #Iceland. Amazing to see @birgittaj and #PirateParty lead the polls. https://t.co/hMVWEW0XyK

"I'm not a career politician. I ended up here by pure accident, maybe I'm just a poetician," the activist and lawmaker told AFP in Reykjavik.

The daughter of folk singer mother and a father she never knew, Jonsdottir has worked in a variety of fields, including as a graphic designer, journalist and spokeswoman for WikiLeaks, as well as a painter and poet.

"I could do anything I wanted to but I decided when I was 14 that I wanted to become a poet," said the 49-year-old lawmaker whose pitch-black hair and bangs give her a distinctive punk rock style.

The Pirate Party, which she cofounded in 2012, is leading in opinion polls ahead of the snap election and could find itself negotiating to form a coalition government with other opposition parties from the left and centre.

If you are going to keep having these election things, at least elect people like @birgittaj and #ezln. https://t.co/d0AM6mSlKt

But the mother-of-two has expressed reluctance to take on the role of prime minister in the country of 330,000 people because she is seeking a radical change to the power structure in Iceland.

"I would like to take this idea of power and bring it to the parliament and actually be the speaker of the house but not the prime minister," Jonsdottir said.

"We need to really shift... parliament should be the strongest and most important institution," she said.

'Will Iceland be brave?'

Her party has pledged to stamp out public corruption in Iceland after the Panama Papers offshore tax haven revelations in April that tarnished bankers, CEOs and cabinet ministers, and cost the then prime minister his job.

It wants to get rid of the traditional parties of the centre-right and right which were associated with the disastrous banking system collapse in 2008 and the Panama Papers scandals.

"Is Iceland going to be brave enough to say no to this corruption bloc which is affiliated with the governmental parties and going to vote for change or are they not ready yet? I hope they are ready!" Jonsdottir said.

"We all share the same ideology when it comes to critical issues: constitution, people power, dealing with the corruption, getting resources from our fisheries so we can pay for the resurrection of the healthcare sector."

Although she has been campaigning for civil rights for years, including the Tibet independence movement, it was the economic crisis of 2008 that pushed her to commit to activism in Iceland.

In the 2009 election, Jonsdottir was elected as member of parliament, or the Althingi, representing the Citizens Movement, which sought a radical reform of Icelandic democracy.

She was a member of the Icelandic delegation to the NATO parliamentary assembly between 2009-2013 and the foreign affairs committee's working group on European affairs between 2010-2011.

Her personal life has been marred by tragedy. Her first husband with whom she had a son disappeared in 1993 and his body was found five years later. She was later married to an Australian for five years.

An avid user of social media, Jonsdottir wrote on her Facebook account:"I have to admit that it is both scary and deeply exciting to be this close to making fundamental changes for my nation."