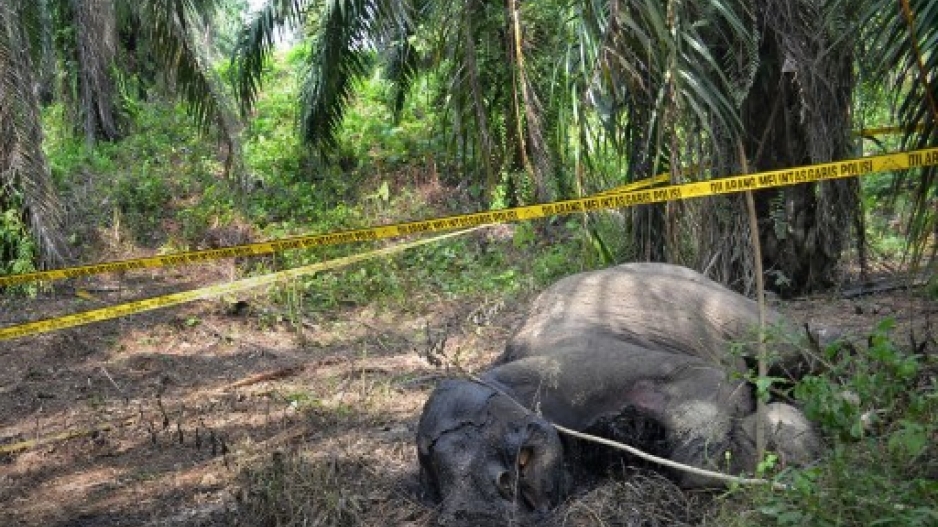 FILE: Seven Sumatran elephants have been found dead in western Indonesia as the creatures come into conflict with humans due to the rapid expansion of palm oil plantations which destroys their habitat.

JAKARTA - Seven Sumatran elephants have been found dead in western Indonesia and it is thought they were poisoned, a wildlife official said on Monday, just the latest deaths of the critically-endangered animals.

Dozens of the elephants have died after being poisoned in recent years on Sumatra island, as the creatures come into conflict with humans due to the rapid expansion of palm oil plantations which destroys their habitat.

The latest to die were a female adult, five male teenagers, and a male calf believed to be from the same herd, said local wildlife agency spokesman Muhammad Zanir.

The remains of the elephants were found on February 16 just outside Tesso Nilo National Park and it is thought they died five months earlier, he said.

"There is an indication that they were poisoned," he said.

"Some people may consider the elephants a threat to their palm oil plantations and poison them."

While Sumatran elephants are regularly found dead, it is rare to discover so many at the same time.

Swathes of rainforest have been destroyed in recent years to make way for plantations and villagers increasingly target Sumatran elephants, which they regard as pests.

While most concessions for palm oil companies are granted outside Tesso Nilo, in Riau province in eastern Sumatra, many villagers still illegally set up plantations inside the park, said WWF spokeswoman Syamsidar, who goes by one name.

Poachers also sometimes target the animals -- the smallest of the Asian elephants -- for their ivory tusks, which are in high demand for use in traditional Chinese medicine.

The WWF says there are only between 2,400 and 2,800 Sumatran elephants remaining in the wild and warns they face extinction in less than 30 years unless the destruction of their habitat is halted.

Rampant expansion of plantations and the mining industry has destroyed nearly 70 percent of the elephant&39;s forest habitat over 25 years, according to the WWF.

Protection group the International Union for Conservation of Nature classifies the elephants as "critically endangered", one step below "extinct in the wild".