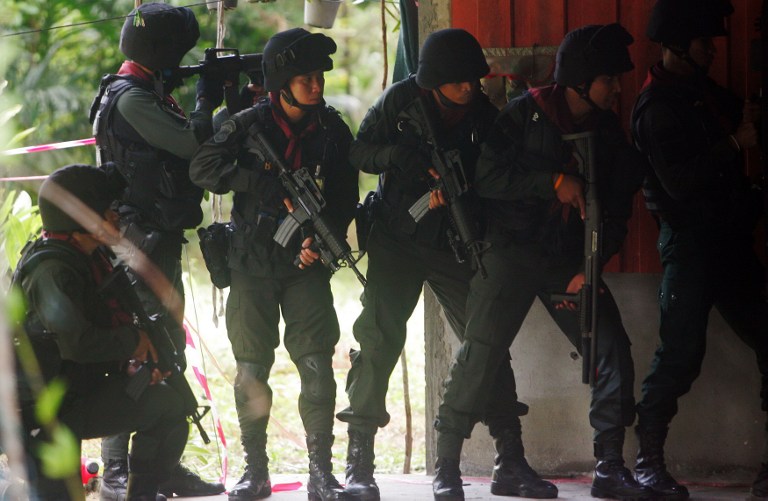 File: Thai police stand guard during a suspected insurgents attack at a southern military base in Thailand. Police rescued 90 cats from being smuggled to Vietnam.

The attack took place on Wednesday when four gunmen on motorcycles pulled up at the store in Pattani province, just 500 metres from a military checkpoint. Five of the victims were Buddhists and one Muslim.

"The attackers sprayed the shop with bullets before going in to finish off their victims. They left a note saying &39;revenge for the innocent&39; before fleeing the scene," a police officer in Pattani said, asking not to be identified.

The killings came just two days after a second round of peace talks in the Malaysian capital, Kuala Lumpur, brokered by Malaysia, between Thai officials and leaders of the Barisan Revolusi Nasional, one of the oldest rebel groups operating in the south of the country.

On Wednesday the military, which has 60,000 troops stationed in southern Thailand, rejected key BRN demands.

Resistance to Buddhist rule in the predominantly Muslim provinces of Yala, Pattani and Narathiwat has existed for decades but resurfaced violently in January 2004. Since then, more than 5,300 people have been killed.

The three provinces were once part of a Malay Muslim sultanate until annexed by Thailand in 1909.

Around 80% of the 1.8 million people living in the south are Malay-speaking Muslims. Many regard Buddhist rule from Bangkok and heavy military presence in the south as oppressive.