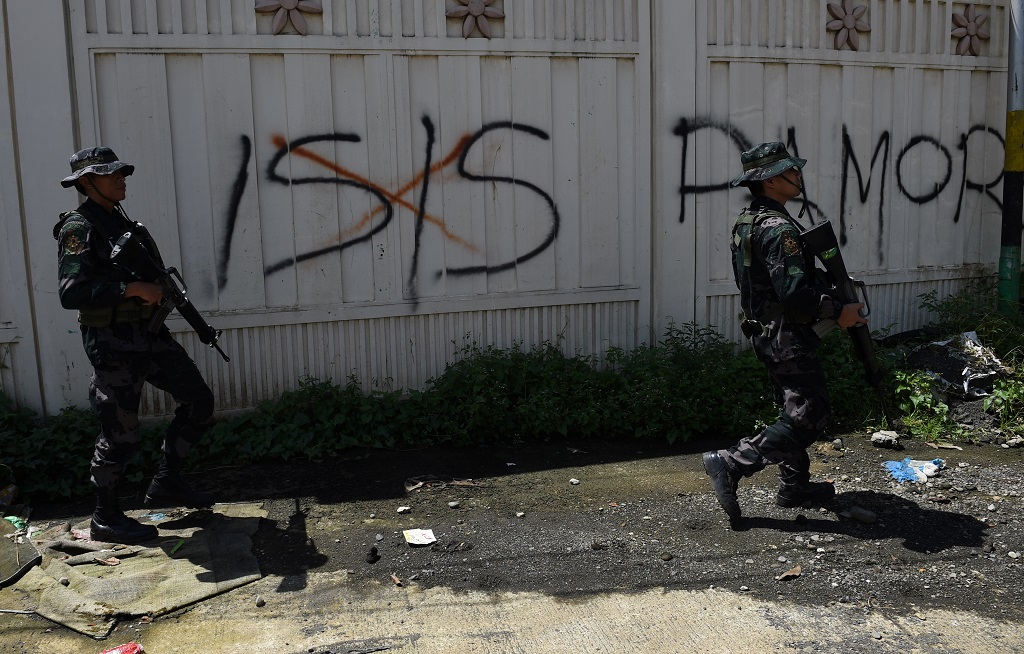 Soldiers walk past Islamic State (IS) group graffiti in Marawi on the southern island of Mindanao on May 31, 2017, as fighting between government forces and Muslim militants.

Three attackers rammed a van into pedestrians on London Bridge and stabbed others nearby on Saturday night before police shot them dead.

It was the third militant attack in Britain in less than three months.

Islamic State, losing territory in Syria and Iraq to an offensive backed by a U.S.-led coalition, had sent out a call on messaging service Telegram early on Saturday urging its followers to carry out attacks with trucks, knives and guns against "Crusaders" during the Muslim holy month of Ramadan.

Read: London attack: What we know

Islamist militants, or people claiming allegiance to the group, have carried out scores of deadly attacks in Europe, the Middle East, Africa, Asia and the United States over the past two years.

British police said on Sunday they would release the names of the three men who killed seven people in London "as soon as operationally possible", adding that searches were continuing in four properties.

Islamic state, this is an answer for you! LOVE... --#OneLoveManchester pic.twitter.com/5LjiWwMTGC

The men rammed a van into pedestrians and stabbed revellers on Saturday night before being shot by police. Twelve people were arrested in east London on Sunday in connection with the attack.

Police said that one man had been released without charge, but four men and seven women were still being detained under terrorism legislation.

"The public can expect to see additional police, both armed and unarmed officers, across the capital as you would expect in these circumstances," Mark Rowley, Britain's top counter-terrorism policeman, said in a statement.