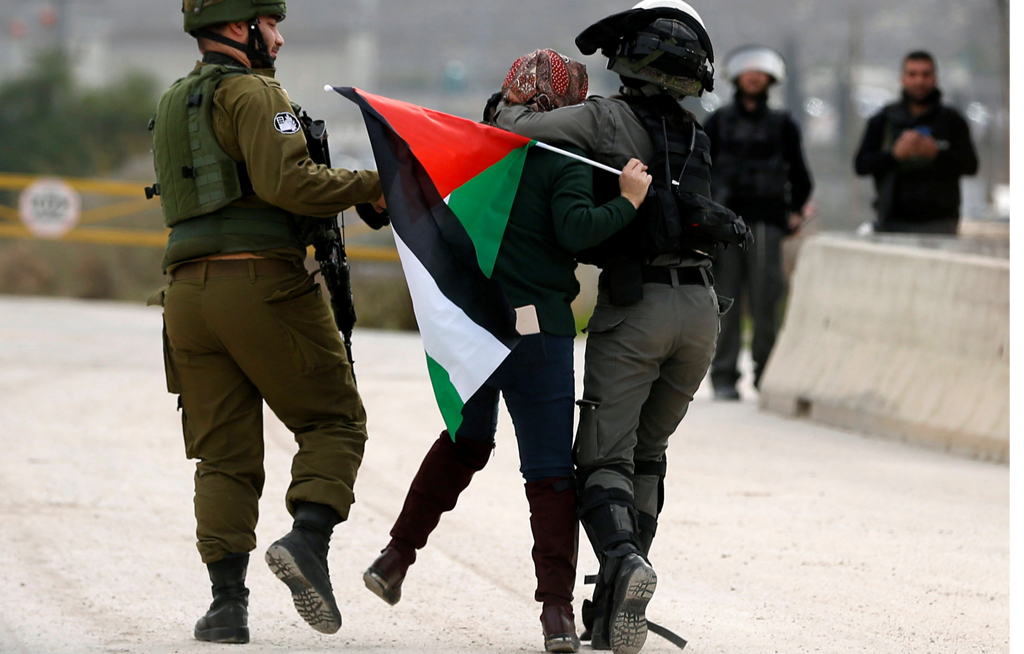 OFER MILITARY PRISON, Palestinian Territories - Israel charged a Palestinian teenager with 12 counts including assault on Monday following her arrest after a video of her slapping and kicking two Israeli soldiers in the West Bank went viral.

Ahed Tamimi, 16, has been hailed as a hero by Palestinians who see her as bravely standing up to Israel&39;s occupation of the West Bank. Israelis accuse her family of using her as a pawn in staged provocations.

The charges filed with an Israeli military court relate to the events in the video but also five other incidents and include stone-throwing, incitement and making threats.

She could face a lengthy jail term if convicted.

Five charges were also filed against her mother Nariman and on Sunday her cousin Nour, 20, was indicted as well.

The accusations against Nariman Tamimi include using Facebook "to incite others to commit terrorist attacks" and participating in the incident on video, the army said in a statement.

Ahed Tamimi and her mother have been ordered to remain in custody until at least January 8, when another hearing will be held.

Prosecutors are requesting that they be kept in detention until the completion of their trial.

Ahed Tamimi&39;s family says the December 15 incident that led to the arrests occurred in the yard of their home in Nabi Saleh, near Ramallah.

Israel&39;s military said the soldiers were in the area to prevent Palestinians from throwing stones at Israeli motorists nearby.

A video shows the cousins approaching two Israeli soldiers and telling them to leave before shoving, kicking and slapping them.

Ahed Tamimi is the most aggressive of the two in the video.

The heavily armed soldiers do not respond in the face of what appears to be an attempt to provoke rather than seriously harm them.

They then move somewhat backwards after Nariman Tamimi becomes involved.

Ahed Tamimi, arrested in the early hours of December 19, has been involved in a series of previous incidents, with older pictures of her confronting soldiers widely published.

She has become something of an icon for Palestinians who have flooded social media with praise and support in recent days.

The teenager, recognisable from her shock of blonde hair, has several times been at the centre of the propaganda war between Israelis and Palestinians.

A years-old photograph of her raising her fist at a soldier was widely published and led to her being received by then Turkish prime minister Recep Tayyip Erdogan in 2012.

She was also photographed while wearing a Tweety Pie shirt and biting the hand of an Israeli soldier in 2015 to try to stop the arrest of a brother.

Israeli officials argue she is being made to star in staged provocations by her family, prominent activists who have been at the forefront of protests in their village.

Palestinians say she is engaged in legitimate resistance against Israel&39;s 50-year occupation of the West Bank.

Lasky called prosecutors&39; decision to charge her not only for the incident on video but also for past incidents "strange" and a bid to ensure she serves significant jail time.

"Since Ahed became kind of a symbol of resistance, they wanted to find a way to keep her in detention for a long period of time," she told AFP.

The army called the five other events instances in which "she assaulted security forces, threw rocks at them, threatened them, obstructed them in the fulfilment of their duties, and participated in riots and incited others to do so."

Lasky said she had not had time to study all the charges and evidence presented, so she could not yet say what length of sentence the teenager, who is being tried as a minor, could face, but she feared it could be "for a long time."

The video has led to varied reactions among Israelis.

Some hailed the restraint of the soldiers, but others said the Tamimis&39; actions merited a tougher response and called for a heavy sentence.

Ahed Tamimi&39;s father has said he fears she will be imprisoned over the incident, particularly because it has become "a case of public opinion" in Israel.