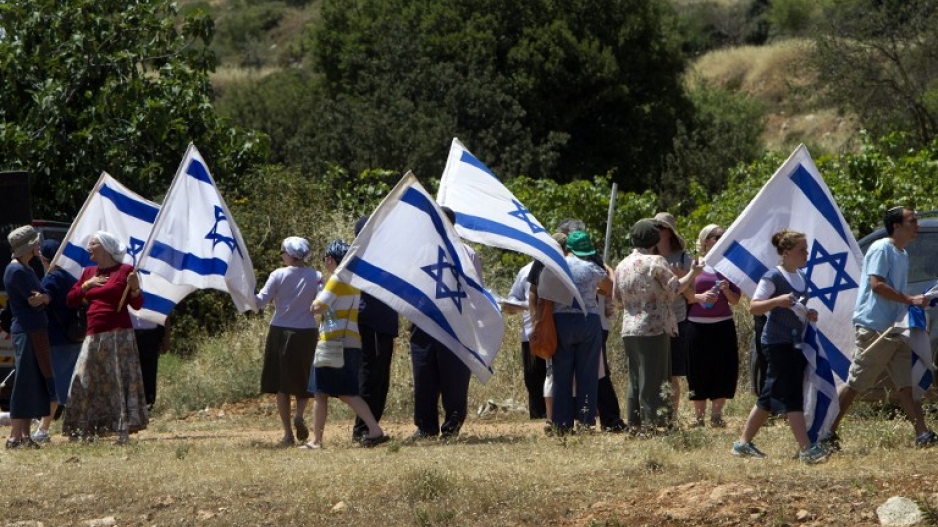 Jewish settlers from the settlements of Gush Etzion and Kiryat Arba wave Israeli flags as they gather on Route 60, mainly used by settlers, near the Palestinian village of Al-Khader in the occupied West Bank on May 24, 2013.

JERUSALEM - An Israeli man was beaten to death and a woman injured in an apparent militant attack by Palestinians at their West Bank settlement home, police said early Friday.

"They were beaten with blunt instruments," at the settlement of Brosh, police spokesman Micky Rosenfeld said, adding that the assumption was "definitely" of a militant attack.

The army said that roadblocks had been set up in the area of the attack, in the northern Jordan valley and security forces were searching for the perpetrators.

Israeli public radio said that the couple were in their home at night when they heard a noise outside and the sound of dogs barking.

The man went outside to investigate and was attacked with iron bars. The woman was also beaten but escaped and raised the alarm.

News site Ynet cited the woman as saying that the attackers were two Palestinians.

The incident occurred less than a week after a nine-year-old Israeli girl was stabbed as she played in her garden in the West Bank settlement of Psagot, near Ramallah.

Police are treating that attack, on Saturday, as a militant action and are still searching for the perpetrator.

Last month an Israeli soldier was shot dead in the southern West Bank city of Hebron, in what the army believes was a Palestinian sniper attack, although no suspects have been arrested.