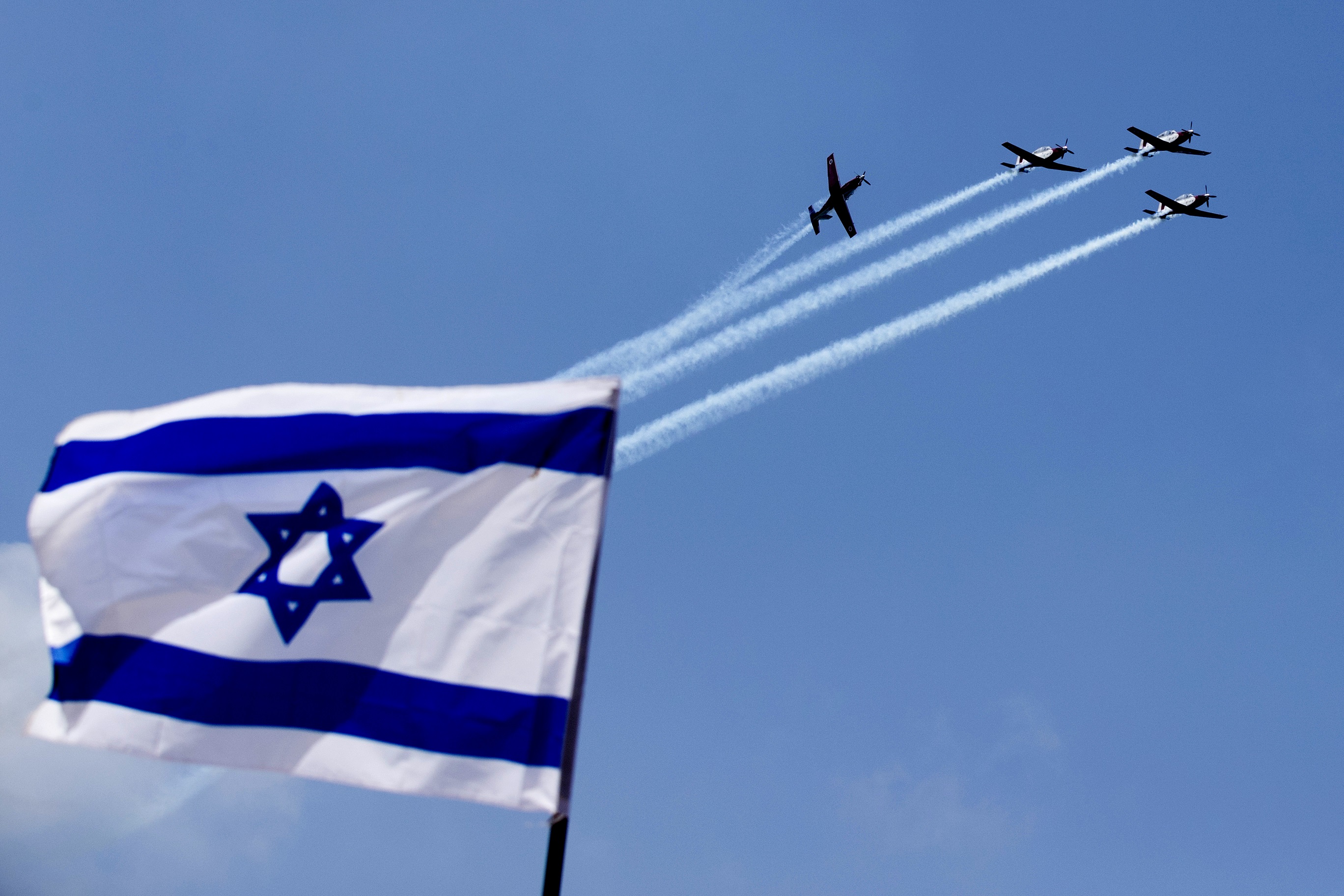 Israeli Efroni T-6 Texan II planes perform during an air show over the beach in the Israeli coastal city of Tel Aviv on May 02, 2017 as Israel marks Independence Day, 69 years since the establishment of the Jewish state.

GAZA/JERUSALEM - The government has condemned "in the strongest terms possible" the latest violence in Gaza.

The country has also withdrawn its Ambassador to Israel in the wake of the violence.

In a statement on Monday evening, the Department of International Relations and Cooperation (Dirco) said this act of aggression resulted in scores of Palestinian deaths, injuries and destruction to property.

"Given the indiscriminate and grave manner of the latest Israeli attacks, the South African government has taken a decision to recall Ambassador Sisa Ngombane with immediate effect and until further notice," Dirco added.

"As we have stated on previous occasions, South Africa reiterates its view that the Israeli Defence Force must withdraw from the Gaza Strip and bring to an end the violent and destructive incursions into Palestinian territories. South Africa maintains further that the violence in the Gaza Strip will stand in the way of rebuilding Palestinian institutions and infrastructure."

The South African Jewish Board of Deputies (SAJBD) and the South African Zionist Federation (SAZF) has slammed Dirco&39;s move as outrageous, saying it "displays gross double-standards."

In a joint statement, they say that while they regret the loss of life, "we recognise that Israel as a sovereign state has the right to defend its own border and its own citizens.  Israel is facing a real danger with the incitement by Hamas of its own population to storm the security fence and attack Israeli civilians."

They go on to say: "By withdrawing its Ambassador, South Africa is essentially walking away from playing any meaningful role in finding a sorely needed resolution to the conflict.

"The rhetoric used by the government has already has spilled into anti-Semitic comment on various social media platforms and the biggest losers are the South African Jewish community and other peace-loving South Africans. This is a victory only for extremism in the Middle East. We call on the South African Government to reconsider its decision immediately.

Israeli troops killed dozens of Palestinians who were taking part in mass protests on the Gaza border on Monday as the United States opened its embassy to Israel in Jerusalem.

The move fulfilled a pledge by US President Donald Trump, who has recognised the holy city as the Israeli capital, but it has fired Palestinian anger and drawn criticism from many foreign governments as a set back to peace efforts.

“Today we open the United States Embassy in Jerusalem, Israel,” US Ambassador to Israel David Friedman said at the inaugural ceremony, attended by a US delegation from Washington and Israeli leaders.

Israel&39;s air force hit a Hamas base in the Gaza Strip on Monday, the military said, as bloody clashes between protesters and soldiers raged along the strip&39;s border with Israel.

"The strike was conducted in response to the violent acts of the last few hours being carried out by Hamas along the security fence."

The border clashes left at least 37 Palestinians dead from Israeli fire and hundreds wounded in the conflict&39;s bloodiest day in years.

The dead included a 14-year-old, according to the Gazan health ministry, which also provided the overall death toll.

A total of at least 91 Palestinians have been killed by Israeli fire since 30 March.

Tuesday marked the bloodiest day in the Israeli-Palestinian conflict since a 2014 Gaza war.

Israeli fire claimed the lives of eight children under the age of 16 on Monday during violent clashes on the Israel-Gaza border over the US embassy opening in Jerusalem, according to the Palestinian envoy to the UN.

"We condemn in the strongest terms these atrocities by the Israeli occupying forces, using this massive fire power against civilians who have the right to demonstrate peacefully - and they have been demonstrating peacefully," said Ambassador Riyad Mansour.

The diplomat gave a toll of 45 Palestinian dead and more than 2,000 injured. The Gazan health ministry reported shortly afterward that the number killed had risen to 52.