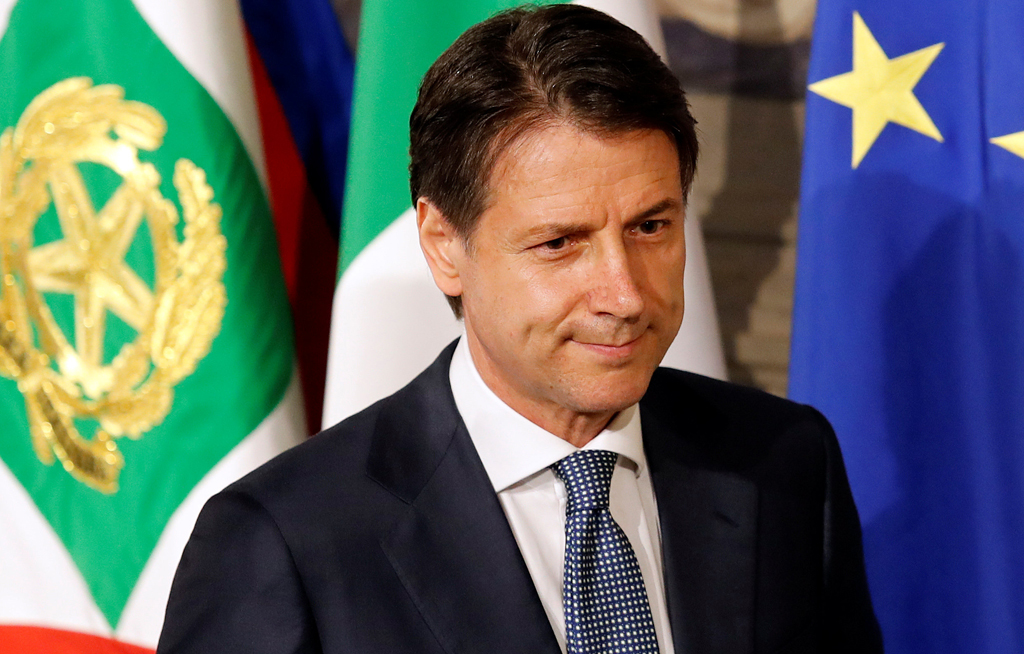 Newly appointed Italy Prime Minister Giuseppe Conte arrives to speak with media after the consultation with the Italian President Sergio Mattarella at the Quirinal Palace in Rome.

Conte was finally sworn in on Friday afternoon at the head of an anti-establishment and eurosceptic government, ending months of uncertainty since elections in March.

The 53-year-old academic heads a government of ministers from the anti-establishment Five Star Movement (M5S) and the far-right League, the first populist coalition in a founding EU member.

On Saturday Conte attended a military parade alongside President Sergio Mattarella, marking Republic Day for the foundation of the Italian Republic in 1946.

A political novice, Conte inherits a daunting list of issues from his predecessor Paolo Gentiloni, including the financial travails of companies such as Ilva and Alitalia, a Group of Seven summit in Canada and a key EU summit at the end of the month, as well as the thorny question of immigration.

Immigration is the bugbear of Conte&39;s interior minister, Salvini, the 45-year-old leader of the anti-immigrant, anti-Islam League, who announced Friday he would visit Sicily to see the situation for himself at one of the main landing points for refugees fleeing war, persecution and famine across North Africa and the Middle East.

"The immigration question remains a hot-button issue, even if the number of new arrivals has fallen," said Salvini, an ally of French far-right leader Marine Le Pen.

"I&39;ll be in Sicily on Sunday. The situation is now calm but only because of the rough seas."

More than 150 migrants, including nine children, disembarked from a rescue ship late Friday in Sicily.

Salvini had said after being sworn in that he would ask his ministry&39;s experts "how to reduce the number of arriving migrants and increase the number of expulsions".

"The good times for illegals is over -- get ready to pack your bags," Salvini said at a rally in the country&39;s north later in the day.

As premier, Conte will be responsible for pushing through the anti-austerity and pro-security promises that the two populist parties campaigned on.

Di Maio also spoke up on Saturday, calling for "entrepreneurs to be left alone".

"Employers and employees in Italy must not be enemies," he said on Facebook.

Unlike his powerful deputies, Conte has mostly kept quiet since he was appointed, however on Saturday the new PM announced on Facebook that he had spoken with German Chancellor Angela Merkel and French President Emmanuel Macron over the phone.

Conte said he would meet the two leaders at next week&39;s G7 summit in Canada, where he will be a "spokesman for the interests of Italian citizens".

Conte has also opted to keep the country&39;s intelligence services under his personal control.

EU and the eurosceptics

The world will be carefully watching power relations between Conte and his two influential deputies -- particularly the EU, given the eurosceptic leanings of Five Star and the League.

EU Commission chief Jean-Claude Juncker called Saturday for Conte&39;s new government to be treated with respect, having earlier sparked controversy by telling Italians to work harder and stop blaming the EU for the country&39;s problems.

"We should show respect towards Italy," Juncker said in an interview with the German press group Funke Mediengruppe.

Juncker said Italy must not suffer the same fate as thrice-bailed out Greece whose dignity was "trodden under foot" by its creditors when left-wing Prime Minister Alexis Tsipras took office in 2015.

"That must not happen again in the present case with Italy," Juncker said.

"Italians have a clear understanding of what is good for their country. They will sort it out."