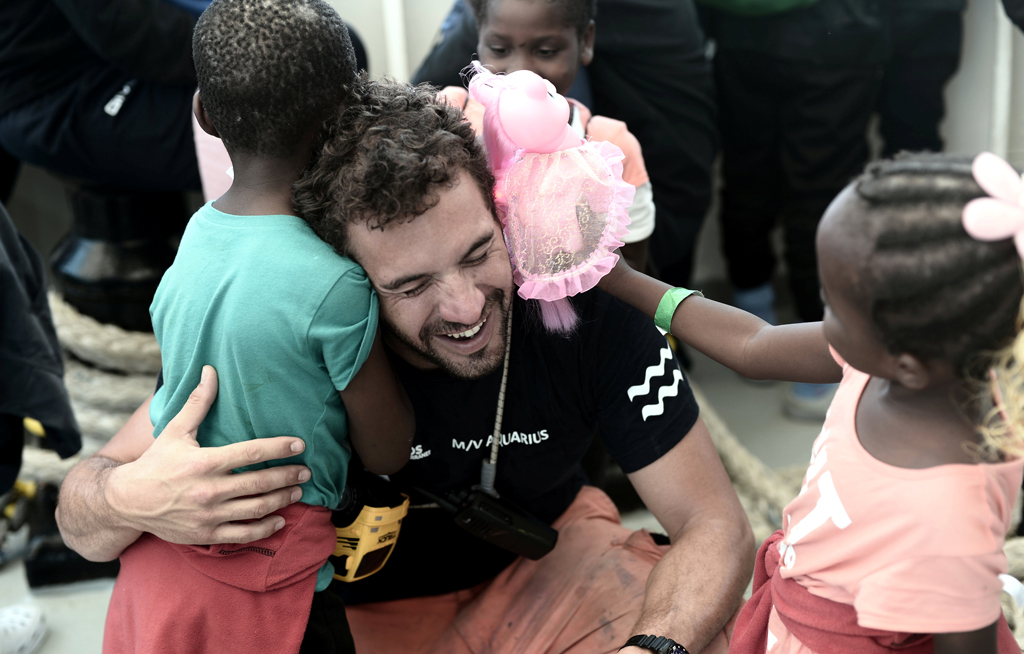 A crew member hugs a migrant child aboard the Aquarius rescue ship before disembarking in the port of Valencia, Spain, June 17, 2018.

ROME - Italy said on Thursday that it would seize two rescue migrant ships, one of which is stranded in the Mediterranean carrying over 200 migrants, adding that they were "illegally" flying the Dutch flag.

The ships Lifeline and Seefuchs, of the German NGO Mission Lifeline, "will be seized by the Italian government and directed into our ports" to launch an investigation into their legal status, announced Italy&39;s infrastructure minister Danilo Toninelli.

The Lifeline ship rescued 226 migrants off the coast of Libya on Thursday morning, the NGO said in statement.

Italy&39;s far-right interior minister Matteo Salvini had earlier said that the ship, which flies under the Dutch flag, should "go to Holland".

But Toninelli later said that the Dutch government denied that the boat was registered in their country.

Responding to a request from the Italian government, the Netherlands said the ship was "unlawfully, illegally flying the Dutch flag", Toninelli said in a Facebook video.

The Dutch representation to the European Union tweeted that the ships Seefuchs and Lifeline did not sail under the Dutch flag.

"These ships belong to a German NGO and do not appear in the Dutch naval registers," the tweet said.

Toninelli said the Lifeline boat of violating international law by taking the migrants aboard despite the fact that the Libyan coastguard was already intervening.

He accused the boat of putting the migrants&39; lives in danger, saying the ship had a "capacity to carry 50 people" but had taken onboard more than 200.

But unlike Salvini, Toninelli said Italy would take in the migrants.

Italy "will once again save the migrants" and transfer them onto Italian boats, said Toninelli.

"And we will seize the ship," he said, adding that the Seefuchs boat would receive the same treatment.

"For us, saving lives, but safely and legally comes first," he said, branding the rescue boats as "irresponsible".

In a statement Lifeline said it had rescued the migrants "in line with all international regulations" and called for a "port of safety to disembark those rescued".

The organisation said it feared "a similar situation to the Aquarius could be on the horizon".

Earlier this month Salvini refused to open its ports the Aquarius carrying over 600 migrants, leaving it stranded in the Mediterranean.

The boat was eventually taken to the port of Valencia in Spain.