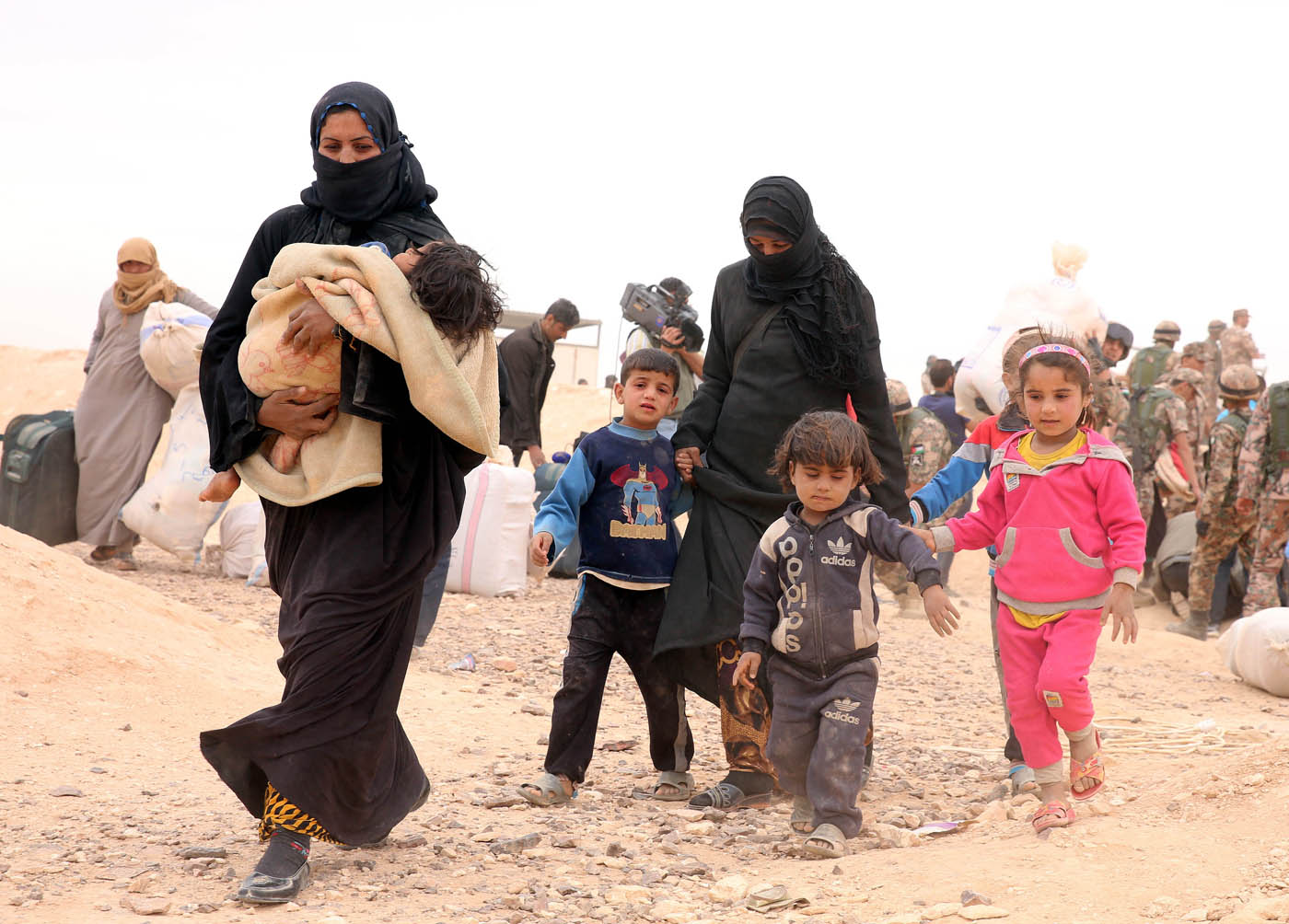 Syrian refugees cross to a camp on the Jordanian border with Syria near Royashed town on May 4, 2016.

AMMAN— Jordan agreed to a one-time delivery of 30 days’ worth of food to tens of thousands of displaced Syrians stuck on the kingdom’s sealed border, the director of the World Food Program said in an interview Tuesday, after flying over the remote desert area and seeing "tents to the horizon."

The number of stranded Syrians is believed to have increased to more than 100,000, from a few thousand seven months ago, Ertharin Cousin told The Associated Press.

Jordan sealed the border on June 21 in response to a cross-border attack claimed by Islamic State extremists that killed seven Jordanian troops.

The closure halted what until then had been regular deliveries of food and water by international agencies to the tent camps from Jordanian soil. Sporadic water shipments continue to reach the area after the closure.

Cousin said she hopes the one-off shipment of canned goods, cooking oil, rice, beans, flour and other items will be delivered soon and give aid agencies time to find alternative ways of reaching the refugees.

"We are going to use this opportunity to get food in quickly over the coming days to give us the space to develop the next solution for providing ongoing assistance," said Cousin, after meeting with Jordanian officials and flying over the berm in a Jordanian military plane.

There seems to be no obvious way of resuming aid deliveries.

"We will use every option in our toolkit," she said, but did not elaborate.

Meanwhile, Jordan said the border will remain closed, arguing that its security is a priority.

Close to 5 million Syrians have fled their country’s civil war since 2011, and more than 650,000 of them have settled in Jordan. The kingdom argues that it has done more than its share in absorbing refugees and that the international community hasn’t done enough to help.

Refugees in Ruqban, the larger of two border encampments, have told AP that food prices have been rising since the closure. They described festering garbage pits and said water shipments have been inadequate. Some have returned to Islamic State-controlled areas deeper inside Syria, refugees said.

Journalists have not been permitted access to the berm, and the only images from Ruqban are those taken by refugees with cellphone cameras.

Meanwhile, WFP began airlifting humanitarian aid this week to families cut off from supplies in northeastern Syria, delivering 40 tons of food on a flight that landed in Qamishli, an area controlled by the Syrian government.

Cousin deflected criticism that the air bridge amounts to tacit support of one side of the conflict.

"WFP provides support in both regime-held and as well as opposition-held areas and we’ve done that since the beginning of this conflict and we always will," she said. "We continue to work to ensure that we remain neutral and that we are working with all sides and all parties."

Cousin said Russian civilian aviation force members, which WFP employs in South Sudan, will fly at least 25 rotations between the Syrian capital of Damascus and Qamishli over the course of a month.

WFP estimates that 275,000 people living in many areas of the province have been cut off from food and other supplies for more than six months.