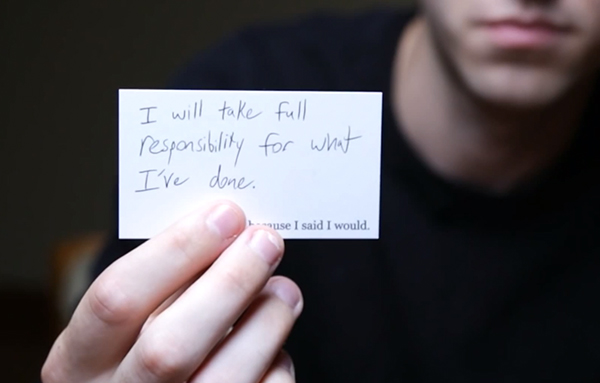 WASHINGTON - A 22-year-old Ohio motorist dramatically claimed responsibility for a drunk-driving fatality, and urged others not to repeat his tragic mistake, in an online video that has gone viral.
"My name is Matthew Cordle and on June 22, 2013, I hit and killed Vincent Canzani. This video will act as my confession," stated Cordle in the professional-looking clip that appears on BecauseISaidIWould.com.
The 3-1/2 minute confession opens with somber music and Cordle sitting in a dark room, his face obscured by pixilation, recounting how he "blacked out" behind the wheel after a night of "heavy drinking" then hit another vehicle in a wrong-way crash on an Interstate highway.
"When I get charged I will plead guilty and take responsibility for everything I&39;ve done to Vincent and his family," he said as the pixilation gives way to a clear view of his face and the camera reveals scars on his arm.
Cordle said "high-powered attorneys" had told him they could get him a reduced sentence, or off the hook entirely, if he agreed to lie, "but I won&39;t dishonor Vincent&39;s memory by lying about what happened."
The video ends with Cordle looking into the camera and telling viewers: "I&39;m begging you. Please don&39;t drink and drive. I can&39;t bring Mr Canzani back ... but you can still be saved. You victims can still be saved."
Alex Sheen, founder of BecauseISaidIWould.com, a donation-supported website where people can go public with promises, said Cordle approached him via Facebook last month with his story.
"I don&39;t know Matt at all outside of this," Sheen told CNN, as the video surpassed 137,000 views on YouTube on Friday.
The prosecutor handling the case, Ron O&39;Brien, said he&39;ll ask grand jurors Monday to indict Cordle on a charge of aggravated vehicular homicide, after receiving the completed police investigation Thursday, the Columbus Dispatch newspaper reported Friday.
If convicted, Cordle could face a prison sentence of up to eight years.
Canzani, 61, was described in his obituary as "a gifted photographer" who attended art school in Ohio and later served in the US Navy as a submarine missile technician.
Local news reports at the time of the accident said Canzani died at the scene of the pre-dawn crash, and that medical staff described the driver of the vehicle that hit him as "very, very drunk."
Every day in the United States, almost 30 people are killed in motor vehicle crashes that involving an alcohol-impaired driver, amounting to one death every 48 minutes, according to the Centers for Disease Control.
It put the annual cost of alcohol-related crashes at more than $51-billion and the total number of drunk-driving fatalities in 2010 at 10,228 -- about a third of all traffic deaths.