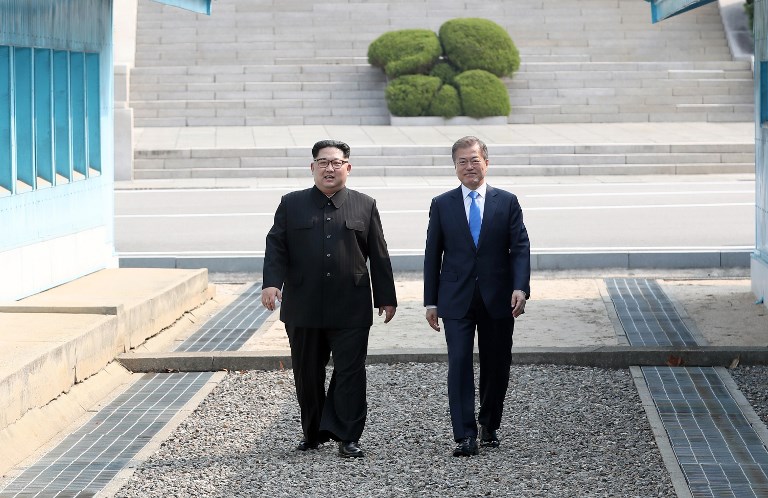 North Korea's leader Kim Jong Un (L) walks with South Korea's President Moon Jae-in (R) to the official summit Peace House building for their meeting on the southern side of the truce village of Panmunjom on April 27, 2018.

SEOUL – The leader of nuclear-armed North Korea Kim Jong Un and the South&39;s President Moon Jae-in said they were committed to the denuclearisation of the Korean peninsula after a historic summit Friday.

"South and North Korea confirmed the common goal of realising, through complete denuclearisation, a nuclear-free Korean peninsula," they said in a joint statement.

They also agreed that they would this year seek a permanent end to the Korean War, 65 years after the hostilities ended in an armistice, rather than a peace treaty.

The two Koreas will seek meetings with the United States and possibly China -- both of them parties to the ceasefire -- "with a view to declaring an end to the War and establishing a permanent and solid peace regime", the statement said.

There would also be a reunion of families left divided when the Korean War ended, one of the most emotive issues for the people of the two countries.

"South and North Korea agreed to proceed with reunion programmes for the separated families on the occasion of the National Liberation Day of August 15 this year," they said in a statement, referring to Japan&39;s surrender at the end of World War II.

Around 57,000 families in the South still have members in the North.