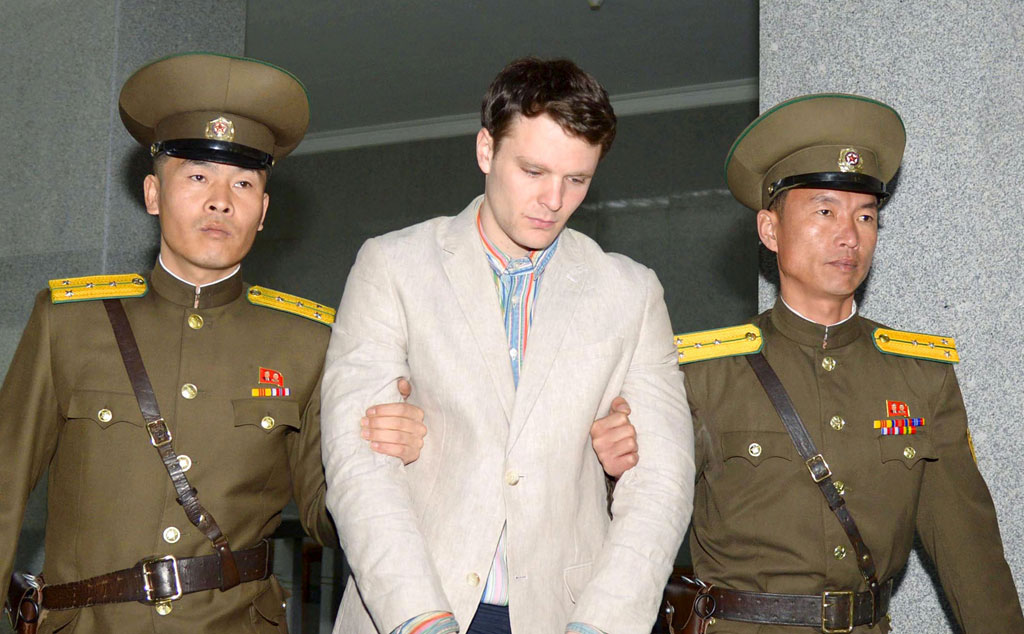 Otto Frederick Warmbier (C), a University of Virginia student who was detained in North Korea since early January, is taken to North Korea's top court in Pyongyang, North Korea, in this photo released by Kyodo March 16, 2016.

SEOUL - North Korea&39;s Supreme Court sentenced American student Otto Warmbier, who was arrested while visiting the country, to 15 years of hard labour on Wednesday for crimes against the state, a punishment Washington condemned as politically motivated.

The US State Department called the sentence "unduly harsh" and White House spokesman Josh Earnest said it was "increasingly clear" that North Korea sought to use US citizens as pawns to pursue a political agenda.

Warmbier, a 21-year-old University of Virginia student, was detained in January for trying to steal an item bearing a propaganda slogan from his hotel in Pyongyang, North Korean media said previously.

"The accused confessed to the serious offense against the DPRK he had committed, pursuant to the US government&39;s hostile policy toward it, in a bid to impair the unity of its people after entering it as a tourist," the state-controlled KCNA news agency reported, using the acronym for the Democratic People&39;s Republic of Korea.

Japan&39;s Kyodo news agency published a picture of Warmbier being led from the courtroom by two guards, with his head bowed, but visibly distressed.

Speaking at a regular news briefing in Washington, Toner said the case underscored the risks associated with travel to North Korea, and added: "The Department of State strongly recommends against all travel by US citizens to North Korea."

Toner said a representative of the Swedish embassy, which looks after US affairs in North Korea, had visited Warmbier in prison and was present at the sentencing.

"We&39;re going to remain in very close coordination with the Swedes on this matter. It&39;s my understanding that he was in reasonable health," Toner said.

The United States has no diplomatic relations with North Korea, a country with which it remains technically at war after the 1950-53 Korean War ended in an armistice rather than a peace treaty.

Human Rights Watch also condemned the sentence. "North Korea&39;s sentencing of Otto Warmbier to 15 years hard labour for a college-style prank is outrageous and shocking, and should not be permitted to stand," Phil Robertson, deputy director of HRW&39;s Asia division, said in an emailed statement.

Warmbier&39;s defence attorney said the gravity of his crime was such that he would not be able to pay even with his death but proposed to the court a sentence reduced from the prosecution&39;s request of a life sentence, KCNA said.

Last month, Warmbier told a media conference in Pyongyang that his crime was "very severe and pre-planned."

Warmbier&39;s parents could not immediately be reached.

A spokesman for the University of Virginia said the school was in touch with Warmbier&39;s family, but declined further comment. Warmbier majors in economics with a minor in global sustainability, according to his social media profiles.

Warmbier was at the end of a five-day New Year&39;s group tour of North Korea when he was delayed at airport immigration before being taken away by officials, according to the tour operator that had arranged the trip.

North Korean leader Kim Jong Un said this week that the country would soon test a nuclear warhead and ballistic missiles capable of carrying nuclear warheads, in what would be a direct violation of U.N. resolutions.

North Korea has a long history of detaining foreigners and has used jailed Americans in the past to extract high-profile visits from the United States.

North Korea is also holding a Korean-Canadian Christian pastor it sentenced to hard labour for life in December for subversion, a Korean-American and three South Koreans.

It has previously handed down lengthy sentences to foreigners before freeing them.

Former New Mexico Governor Bill Richardson, who had previously travelled to North Korea, met the North&39;s ambassador to the United Nations on Tuesday to press for Warmbier&39;s release, the New York Times reported.

"I urged the humanitarian release of Otto, and they agreed to convey our request," Richardson was quoted as saying.

While most tourists to North Korea are from China, roughly 6,000 Westerners visit annually, although the United States and Canada advise against it. Most visitors are curious about life in the reclusive state and ignore critics who say their dollars prop up a repressive system.