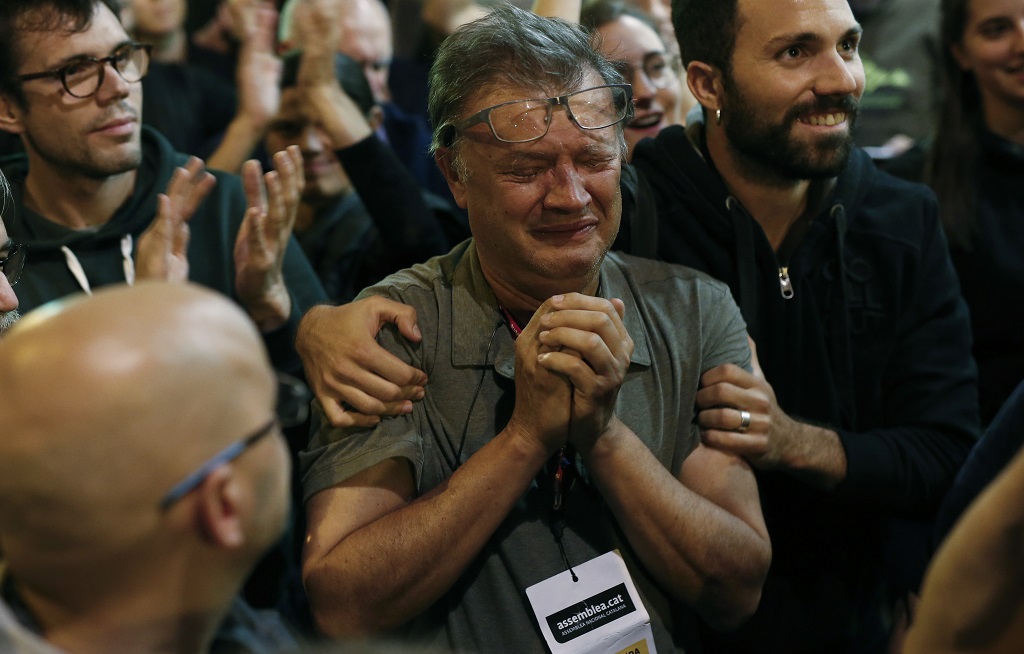 A member of the Catalan National Assembly (ANC) cries at the end of the voting day at the 'Espai Jove La Fontana' (La Fontana youth center) polling station, on October 1, 2017 in Barcelona.

SPAIN – Catalonia's leader Carles Puigdemont said on Sunday the region won the right to break away from Spain after "millions" turned out to vote in an independence referendum banned by Madrid and marred by clashes.

However Spanish Prime Minister Mariano Rajoy said the plebiscite had been blocked, saying "today there has not been a self-determination referendum in Catalonia."

Thank you very much @CharlesMichel for your commitment against violence and for your call for political dialogue https://t.co/oT9rLuOfn8

At least 92 people were confirmed injured out of a total of 844 who needed medical attention, Catalan authorities said, as police cracked down on a vote Spain's central government branded a "farce".

The interior ministry said 33 police required treatment as a result of the clashes.

The violence raised alarm abroad and further heightened tensions between Rajoy's government and the authorities in Catalonia in the worst political crisis in Spain in decades.

Rajoy called the vote a process that "only served to sow division, push citizens to confrontation and the streets to revolt", but left the door potentially open to negotiations on greater autonomy for the region.

The referendum was organised under the threat of reprisals and criminal charges but thousands of Catalans stood in defiance of the central government crying "Votarem" -- "We will vote".

Catalan President Carles Puigdemont has cast his vote in Barcelona after police intervened at another location pic.twitter.com/qJED5Fl4rJ

Puigdemont, who governs Catalonia, said in an address after polls closed: "With this day of hope and suffering, the citizens of Catalonia have won the right to an independent state in the form of a republic."

He added that "millions" had turned out to vote and urged the European Union stop looking "the other way" following a police crackdown.

From early in the day, helmeted police armed with batons moved in en masse to seal off polling stations and seize ballot boxes, sparking clashes.

Singing of 'Els Segadors', the Catalan anthem, in Edinburgh at the end of the solidarity protest. #CatalanReferendum pic.twitter.com/MSeKvQ9KMq

"They took the ballot boxes by force... and they literally yanked them from us as we continued to sing 'Els Segadors', the Catalan hymn, and shouting "long live democracy'," said Marc Carrasco, in charge at one Barcelona polling station.

In the second such vote in three years, more than 5.3 million people were called on to have their say on independence from Spain in the wealthy northeastern region which has its own distinct language and culture.

They were asked: "Do you want Catalonia to become an independent state in the form of a republic?"

The referendum law foresees a declaration of independence within 48 hours of a 'Yes' vote but it remains unclear if the regional government will actually do so.

More than 40 unions and Catalan associations called a region-wide strike on Tuesday after the police crackdown on the vote.

Even before the vote, judicial officials ordered police to seize ballot papers, detain key organisers and shut down websites promoting the referendum after Madrid and the courts deemed it unconstitutional.

Deputy Prime Minister Soraya Saenz de Santamaria called on the Catalan authorities to call off what she dismissed as a "farce".

Thousands of people had gathered outside polling stations before dawn, joining those who had spent the night camped inside to ensure they would be open on the day.

In central Barcelona, riot police charged at demonstrators who were sitting on the ground at a polling station, and fired rubber bullets, witnesses said.

The crackdown drew a sharp rebuke from Catalan leaders and others including Nicola Sturgeon, leader of the pro-independence Scottish National Party.

Firefighters sacrifice themselves as human shields to protect people in #Catalonia from violence.#CatalanReferendumpic.twitter.com/bq8ucbPYfZ

Riot police also stormed a polling station near Girona, smashing the glass doors of the sports centre where Puigdemont was due to vote and cutting a chain to force their way in.

But the regional government said Puigdemont had managed to vote anyway in nearby Cornella del Terri, and in several areas voting was reported to be peaceful.

The trouble caused Barcelona football club to play its La Liga tie against Las Palmas behind closed doors after the Spanish league refused to postpone the match.

Under a sea of umbrellas outside a school in Barcelona, a crowd gathered, among them elderly people in wheelchairs, families with buggies and parents clutching toddlers by the hand.

With no police in sight, they were able to cast their ballots, prompting scenes of jubilation.

"That's the great hope, to be able to vote freely like this despite the problems we've faced, I'm very happy. I can die peacefully," added Jose Mas Ribas, 79.

Although Catalans are divided over independence, most want to vote on the matter in a legal and binding plebiscite.

Pro-separatist lawmakers have pushed for a referendum since September 2015 when they won a narrow majority in Catalonia's parliament.

Voting and violence in the streets of a defiant Catalonia https://t.co/j7zVanZhME pic.twitter.com/sUSSuJDAfK

Although Catalonia already has significant control over education, healthcare and welfare, the region says it pays more in taxes than it receives from Madrid.

This has sparked resentment which has been further exacerbated by Spain's economic woes and helped push the secessionist cause.

Spanish police force their way into polling station in Barcelona where Catalonia President Carles Puigdemont is trying to vote pic.twitter.com/GizWL0NbQf

Rajoy's government has come under fire for limiting its response to the crisis, and several leftwing politicians called on Sunday for him to resign.

"The state needs to explain the benefits of remaining united, instead of repeating all the time that the referendum is illegal," said Rafael Castillo, a 59-year-old engineer at a Madrid rally, wearing a scarf with the Spanish flag around his neck.