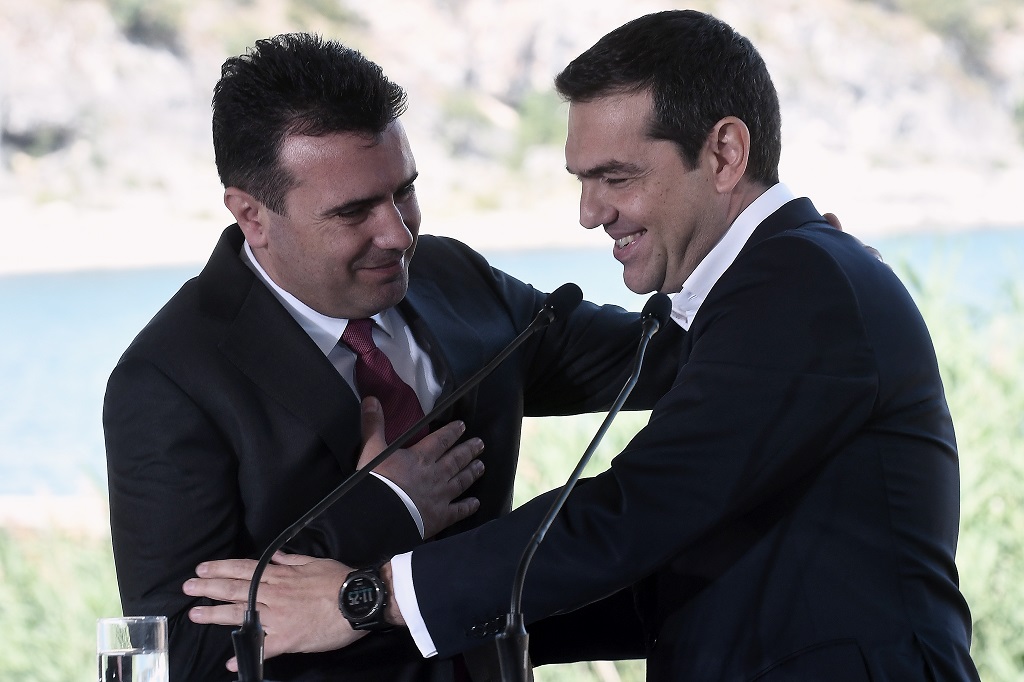 PSARADES, Greece - Macedonia and Greece signed a historic preliminary agreement to rename the country the Republic of North Macedonia on Sunday, ending a row that has poisoned relations between the neighbours since 1991.

"This is a brave, historic and necessary step for our peoples," said Greek Prime Minister Alexis Tsipras.

"We are here to heal the wounds of time, to open a path for peace, fraternisation and growth for our countries, the Balkans and Europe," he said.

Macedonia Prime Minister Zoran Zaev said: "Our two countries should step out of the past and look to the future.

"Our peoples want peace... we will be partners and allies," he said.

The accord begins to unravel one of the world&39;s longest -- and arguably most arcane -- diplomatic disputes, which began 27 years ago with Macedonia&39;s declaration of independence but whose roots date back centuries.

"The time has come again to sing happy songs in the Balkans," Tsipras said, moments before the document was signed by the two countries&39; foreign ministers.

Zaev and several of his ministers arrived by speedboat at the picturesque fishing village of Psarades under a sunny sky, on the southern bank of Lake Prespa that is one of the natural boundaries between the two countries.

Tsipras and Zaev embraced on the village dock and entered the large tent where the deal was signed to a standing ovation from gathered dignitaries and officials.

FMs @NikosKotzias & @Dimitrov_Nikola, along with UNSG Personal Envoy Matthew Nimetz, sign the agreement resolving the name issue in the presence of PMs @tsipras_eu & @Zoran_Zaev at lake Prespa. A historic moment for our two countries, the WesternBalkans & Europe -- pic.twitter.com/xAz4B6QtnU

Nimetz, who turned 79 on Sunday and also signed the agreement, had been trying to broker a solution since 1994, first as a US envoy and subsequently on behalf of the United Nations.

But it was the election of Zaev in 2017, replacing nationalist PM Nikola Gruevski, that proved crucial.

An economist and former mayor of Strumica, Zaev made rapprochement with Greece a priority to secure his country&39;s membership of the European Union and NATO, blocked by Athens for years.

After the signature, Tsipras will cross over to the Macedonian side of Lake Prespa for lunch, becoming the first Greek prime minister to visit the neighbouring state.

Since 1991, Athens has objected to its neighbour being called Macedonia because it has its own northern province of the same name, which in ancient times was the cradle of Alexander the Great&39;s empire -- a source of intense pride for modern-day Greeks.

The two premiers, born just months apart in 1974, have bucked strong hostile reactions at home to push ahead with the agreement.

"I would not call it a pleasant day," said Achileas Papadopoulos, a 60-year-old fisherman on the banks of Lake Prespa, a natural boundary between the two countries.

On Saturday, as the government defeated a censure motion against the accord in Athens, clashes broke out between protesters and police outside parliament.

Officials later blamed the incident on far-right supporters of Greek neo-Nazi party Golden Dawn, some of whom attacked the cars of lawmakers after the vote.

Opposition is even stronger in Greece&39;s north, where Greek and Bulgarian guerrillas fought a bitter four-year war in the early 20th century for predominance among Orthodox Christians in then Ottoman-held Macedonia.

Two short wars were then fought in 1912 and 1913 between the Balkan states and the Ottoman Empire to end six centuries of rule from Istanbul, with atrocities committed by both sides.

"This land has been watered with blood," says a 22-year-old Psarades local, who declines to give her name. "Our grandfathers talk about the past and cry."

Athens Thousands of Greeks gathered outside the treasonous anti-Greek ZioParliament vouli and attempted to invade to cancel the sale of Macedonia which is synonymous with Greece for +4000 years. ?he fascist regime used chemicals and brutal violence again. Macedonia Greece pic.twitter.com/lX468hGX51

Tsipras has been accused of treachery by Greek hardliners, and on Saturday defeated a vote of censure against his government amid protests and clashes with police outside parliament.

In Macedonia, President Gjorge Ivanov plans to exercise a one-time veto option to block the deal that the nationalist opposition has called a "capitulation".

The Macedonian parliament is scheduled to start debating the agreement next week.

The accord still needs to be approved by Macedonia&39;s parliament and then pass a referendum.

The deal, brokered after months of intensive talks, is touted as a vital step for stability and economic development in the Balkans.

"Signing the deal will mean opening the border soon I guess. It means a lot, for us it is a huge thing," says Bosko Dimovski, a 60-year-old from Dolno Dupeni, the first village on the Macedonian side of the border.

"This used to be one of the richest regions in the Balkans, and after the border was closed it became one of the poorest. Imagine what (the deal) will mean, just for the flow of people ... local business, revival of tourism," says Dimovski, who runs a beach bar just 50 metres from the border.

Greek Foreign Minister Nikos Kotzias and Nikola Dimitrov of Macedonia will sign the historic accord, with Prime Ministers Alexis Tsipras and Zoran Zaev in attendance, joined by officials from the United Nations and the European Union, who have welcomed the move.

Once ratified by the countries&39; respective parliaments and confirmed by a referendum in Macedonia by the end of the year, the agreement will also enable the landlocked state to eventually join the European Union and NATO.