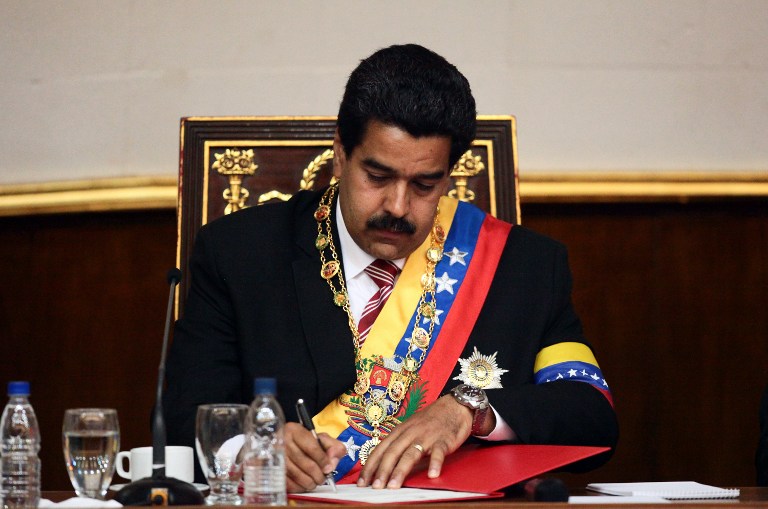 Venezuelan acting president Nicolas Maduro signing a document after being sworn in by the President of the National Assembly during a ceremony in Caracas, on March 8, 2013.

CARACAS – Venezuelan President Nicolas Maduro declared a 60-day state of emergency on Friday due to what he called plots from within the Opec country and the US to topple his leftist government.

Maduro did not provide details of the measure.

A previous state of emergency, implemented in states near the Colombian border last year, suspended constitutional guarantees in those areas, except for guarantees relating to human rights.

Earlier on Friday, US intelligence officials told reporters they were increasingly worried about the potential for an economic and political meltdown in Venezuela and predicted Maduro, 53, was not likely to complete his term.

But the former union leader and bus driver has vowed to stick out his term, and accuses the US of fomenting an undercover coup against him.

He pointed to this week&39;s impeachment of fellow leftist Dilma Rousseff in Brazil as a sign that he is next.

"Washington is activating measures at the request of Venezuela&39;s fascist right, who are emboldened by the coup in Brazil," Maduro said during a Friday night broadcast on state television.

Washington has had an acrimonious relationship with Caracas for years, especially following US support for a short-lived 2002 coup against late leader Hugo Chavez.

Venezuela&39;s ruling Socialist Party has long been a strong ally of Rousseff&39;s Workers Party, however, and her departure adds to Maduro&39;s isolation in Latin America.

Flanked by his ministers and a statue of Chavez, Maduro signed a state of emergency and extend a state of economic emergency to protect the country from foreign and domestic "threats", without providing details.

"Today Maduro has again violated the constitution," said opposition lawmaker Tomas Guanipa. "Why? Because he is scared of being recalled."

Why is Dilma gone, but Maduro still standing? https://t.co/ooCOIu785T