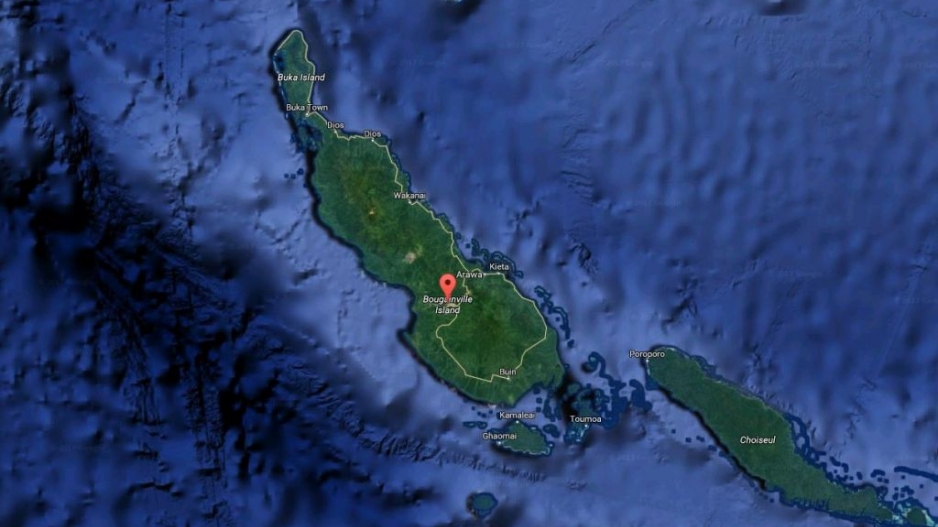 File: An image of Papua New Guinea from Googlemaps, showing Bougaineville Island, where a 7.9 magnitude earthquake struck on 22 January, 2017.

SYDNEY - A major 7.9-magnitude earthquake struck Papua New Guinea on Sunday, but a tsunami alert initially issued for the Pacific island nation and its neighbours was later cancelled.

The tremor struck 40 kilometres west of Panguna on Papua New Guinea's Bougainville island at a depth of 153 kilometres at 3:30 pm local time (0430 GMT), the US Geological Survey said.

Its preliminary assessment added that light to moderate damage was possible on Bougainville Island.

According to the NWS PACIFIC TSUNAMI WARNING CENTER, the Earthquake has been downgraded to 7.9: pic.twitter.com/MCueFwJswH

The Pacific Tsunami Warning Center said waves of between 0.3 and one metre above tide level were possible for some coastal areas of PNG and the neighbouring Solomon Islands.

The center issued another statement about an hour later to say that threat has now passed.

"Even though it is quite deep at 150 kilometres, because it is such a large earthquake, it will produce shaking on the surface," Geoscience Australia seismologist Spiro Spiliopoulos told AFP.

He added that some damage was possible.

Aid group Save the Children has an office on Buka island next to the main Bougainville Island.

Its PNG country director Jennifer El-Sibai described the quake as "really powerful" but said no reports of damage had been received so far.

Connie Wihongi-Stevens posted on Facebook that her husband, who is working in Arawa some 46 kilometres west of where the quake struck, was safe but shaken by the tremor.

"The home he was in shook terribly and people were running everywhere cars rocking to and fro not nice hoping to hear from him when the power comes back on," she wrote.

A 7.9-magnitude quake struck off Papua New Guinea in mid-December, but no casualties were reported and an initial tsunami threat was later deemed to have passed.

Earthquakes are common near Papua New Guinea, which lies on the 4,000-kilometre-long Pacific Australia plate.

It forms part of the "Ring of Fire", a hotspot for seismic activity due to friction between tectonic plates.

In 2013 the Solomon Islands were hit by a devastating tsunami after an 8.0-magnitude earthquake rattled the region.