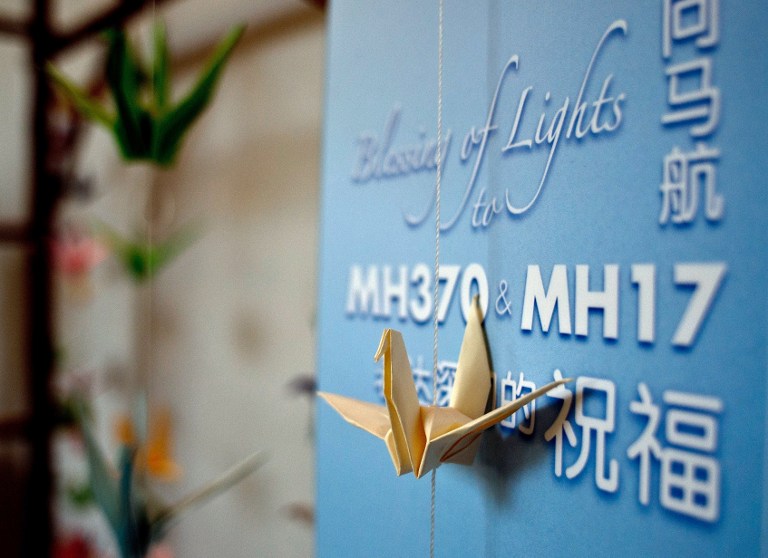 Origami paper cranes hang on a board offering prayers and condolences to the Malaysia Airlines MH370 and MH17 victims and their families. The search for Flight MH370 will continue on Sunday.

KUALA LUMPUR - Malaysia has declared the disappearance of Malaysia Airlines Flight MH370 an "accident", its Department of Civil Aviation (DCA) said on Thursday.

The Boeing 777 aircraft disappeared on March 8 last year, carrying 239 passengers and crew shortly after taking off from the Malaysian capital of Kuala Lumpur, bound for Beijing.

Months of searches have failed to turn up any trace.

"We officially declare Malaysia Airlines flight MH370 an accident ... and that all 239 of the passengers and crew onboard MH370 are presumed to have lost their lives," DCA director-general Azharuddin Abdul Rahman said in a statement.

The announcement is in accordance with standards of annexes 12 and 13 in the International Civil Aviation, said Azharuddin. It will allow families of the passengers to obtain assistance through compensation, he said.

Malaysia Airlines was ready to proceed immediately with the compensation process to the next-of-kin of the passengers on the flight, he said.

International investigators are looking into why the Boeing jet veered thousands of miles off course from its scheduled route before eventually plunging into the Indian Ocean.

"Both investigations are limited by the lack of physical evidence at this time, particularly the flight recorders," said Azharuddin.

"Therefore, at this juncture, there is no evidence to substantiate any speculations as to the cause of the accident."

The DCA plans to release an interim report on the investigation into the missing jetliner on March 7, a day before the first anniversary of the disappearance, a minister said on Wednesday.

"This declaration is by no means the end," said Azharuddin, adding that it will continue with the search for the missing plane with assistance from China and Australia.

Malaysia airline&39;s crisis worsened on July 17 when its Flight MH17, on a flight from Amsterdam to Kuala Lumpur, was shot down over Ukraine, killing all 298 people on board.