Marchers scuffle with Baltimore police over death of man in custody 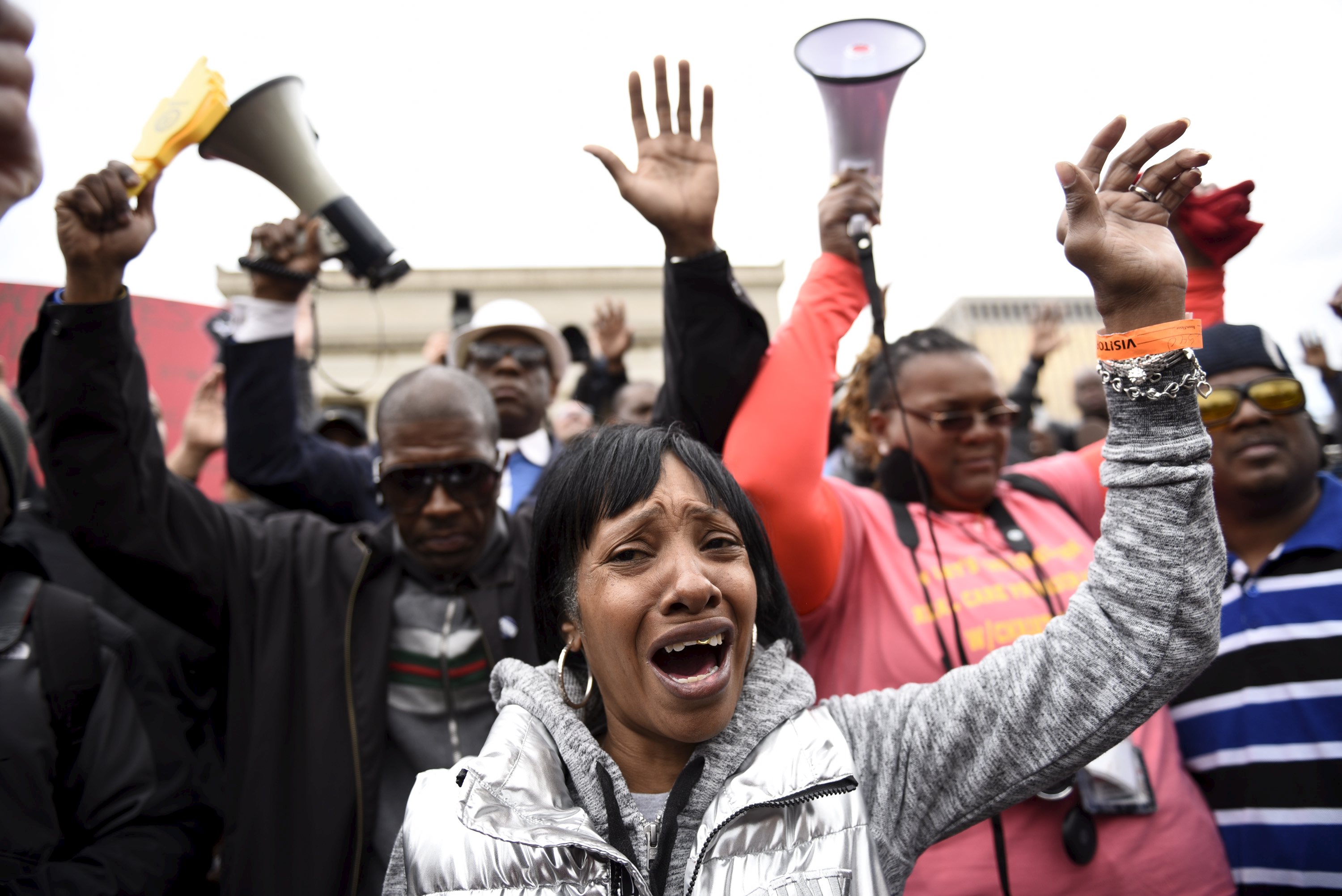 Angela Hazel (C) reacts near City Hall during a protest against the death of Freddie Gray in police custody, in Baltimore April 23, 2015.

BALTIMORE - Whistle-blowing, chanting demonstrators briefly scuffled with police on Thursday during a protest over the death of a black man in Baltimore police custody.
A handful of the hundreds of marchers demonstrating against the death of Freddie Gray, 25, threw bottles of water and debris at police as officers arrested a man during the noisy march from City Hall to the Western District police station where Gray was taken when he was arrested on April 12.
Police commanders at the scene had no immediate word on the reason for the arrest during the march, and a police spokesman had no immediate comment.
Gray died a week after he was arrested. A preliminary autopsy showed he died of a spinal cord injury.
His death has sparked outrage, and Thursday&39;s march was the latest protest in the largely black city.
Protesters stopped outside the office of the US Attorney and Baltimore City State&39;s Attorney Marilyn Mosby, who will determine whether charges will be brought against officers in the case.
Some protesters called for the six officers suspended in connection with the case to be charged with murder.
The march snarled rush-hour traffic and drew onlookers in Baltimore&39;s Inner Harbor, its premier tourist attraction.
Chanting "Tell the truth! Stop the lie! Freddie didn&39;t have to die," protesters ended outside the Western District station facing off with police behind metal barricades.
Kinji Scott, 45, a community activist and educator, said Baltimore&39;s poor neighborhoods need jobs and better education.
"You neglect our community and then deny us justice? We need justice," he said.
Maryland Governor Larry Hogan was sending 25 state troopers to reinforce Baltimore police, his office said.
The Southern Christian Leadership Conference said it would independently investigate Gray&39;s death, and the local head of the civil rights group said it lacked confidence in a police probe.
Police said Gray fled when officers approached, and they found a switchblade knife in his pocket. He was put in a police van to be taken to a station.
When Gray was taken out, he was unresponsive and taken to a hospital.
Police have said they will conclude their investigation by May 1 and turn results over to state prosecutors, followed by an independent review. The US Department of Justice is conducting a separate probe.
Gray&39;s death follows a series of killings of unarmed black men by white police including in Ferguson, Missouri, and North Charleston, South Carolina.