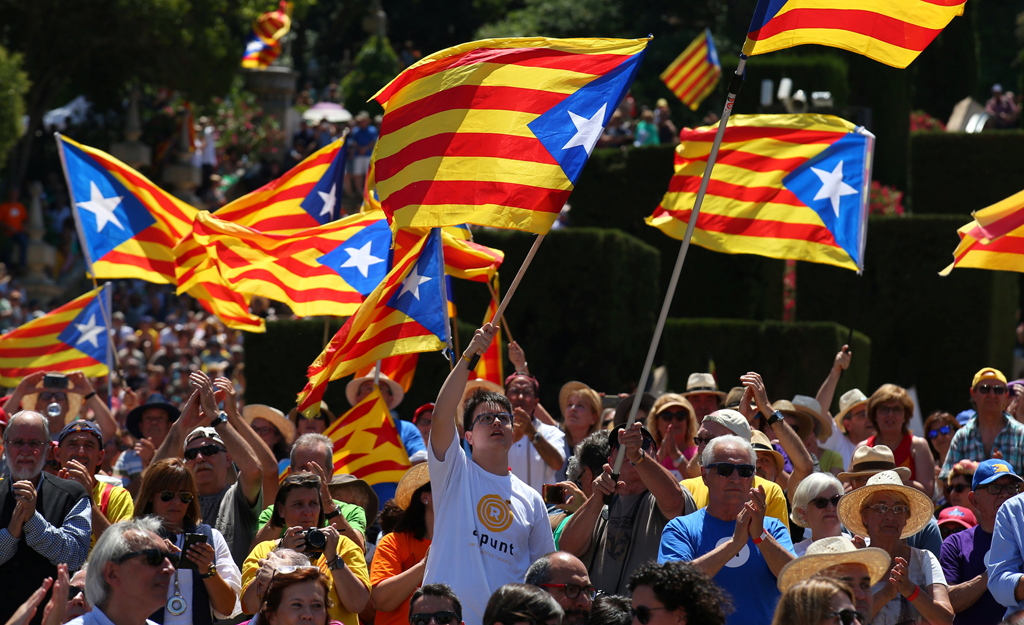 Crowds of protesters swarmed, singing and clapping, through Barcelona&39;s streets in a sea of red-and-yellow Spanish flags, brandishing placards reading "De Todos" (It belongs to all of us).

Municipal police said the crowd numbered about 300,000 while organisers said 1.3 million turned out and the central government&39;s representative in Catalonia put the figure at one million.

Spain&39;s biggest political crisis in decades mounted on Friday when secessionists in the Catalan parliament voted to declare the wealthy northeastern region of some 7.5 million people an independent republic.

The central government of Prime Minister Mariano Rajoy reacted swiftly by temporarily stripping the region of its autonomy and declaring the dismissal of regional president Carles Puigdemont and his executive.

"We are all Catalonia," proclaimed a massive banner, as marchers, young and old, chanted "Prison for Puigdemont".

"It was an act of madness that has brought us to the brink," said Alex Ramos, the vice-president of Societat Civil Catalana, a group opposed to independence that organised the rally.

Meanwhile, the deputy president of the deposed Catalan government lashed out at Madrid, over what he called a "coup d&39;etat".

"The president of the country is and will remain Carles Puigdemont," the deposed leader&39;s deputy, Oriol Junqueras, wrote in Catalan newspaper El Punt Avui.

Junqueras used the word "country" to refer to Catalonia, and signed off as the region&39;s "vice president".

"We cannot recognise the coup d&39;etat against Catalonia, nor any of the anti-democratic decisions that the PP (Rajoy&39;s ruling Popular Party) is adopting by remote control from Madrid," he wrote.

On top of firing Catalonia&39;s government, Rajoy dissolved its parliament and called December 21 elections for the region.

"It is hard to see how they will go on governing," Spain&39;s Foreign Minister Alfonso Dastis said during an interview with Britain&39;s Sky News.

"Reality is already sinking in, will continue sinking in and they will realise that they cannot do something without the authority of law," he added.

Flor Pena, a 59-year-old originally from the northwestern autonomous region of Galicia, described the separatist actions as "shameful".

"The thing to do now is to beat them at the polls," she said.

She was part of a throng gathered near the spot where tens of thousands of people had celebrated the new "republic" with songs, wine and fireworks on Friday.

"They have made fools of us," Miguel Angel Garcia Alcala, 70, who had travelled from the town of Rubi, 22 kilometres (14 miles) from Barcelona, told AFP.

"It is illegal what they have done... They are dictators."

The Catalan crisis was triggered by a banned independence referendum on October 1 that was shunned by many and marred by police violence.

"We have to turn out and vote to defend a return to normality," former European Parliament president Josep Borrell, who is from Catalonia, told the rally, taking place a day after thousands of people joined a similar march in Madrid.

READ: What next as Catalan crisis escalates?

"This is a dramatic moment in the history of Spain, a tremendously difficult and dangerous time," he added.

As prosecutors prepared to file charges of rebellion against Puigdemont next week, he called Saturday for "democratic opposition" to Madrid&39;s decision to impose direct rule -- the first curtailment of regional autonomy since Francisco Franco&39;s 1939-75 dictatorship.

Roughly the size of Belgium, Catalonia accounts for about 16 percent of Spain&39;s population and attracts more tourists than any other region.

It produces a fifth of Spain&39;s economic output, making the region&39;s economy the same size as Portugal&39;s.

Before the upheaval, Catalonia enjoyed considerable autonomy, with control over education, healthcare and policing.

But while fiercely protective of their language, culture and autonomy, Catalans are divided on independence, according to polls.

Spain has the backing of the United States and allies in a secession-wary European Union still reeling from Britain&39;s decision to leave.

Many fear the economic impact as the standoff drags on, and about 1,700 companies have already moved their legal headquarters out of Catalonia.

The tensions over secession spilled over into the stands as Real Madrid, supported by Rajoy, slumped to a 2-1 defeat at Girona, Puigdemont&39;s team, at the Catalan side&39;s stadium.