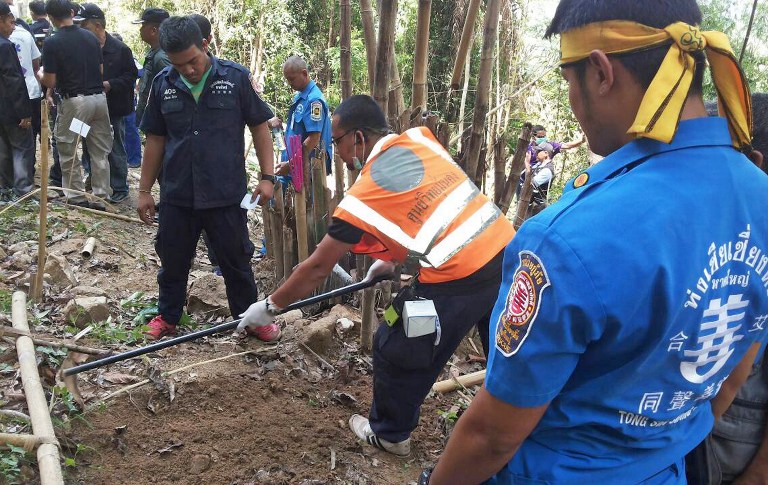 Rescue workers and forensic officials inspect the site of a mass grave at an abandoned jungle camp in the Sadao district of Thailand's southern Songkhla province bordering Malaysia on May 1, 2015.

BANGKOK, Thailand - Authorities in Thailand uncovered a mass grave in an abandoned jungle camp on Friday believed to contain the remains of migrants from Myanmar and Bangladesh, a grisly find in a region notorious for people-smuggling routes.

The discovery was made at a remote camp in Sadao district, in Songkhla province bordering Malaysia, and comes as Thailand&39;s junta cracks down on human trafficking following accusations that officials have been complicit in the trade.

The border area with Malaysia is notorious for its network of secret camps where smuggled migrants are held, usually against their will until relatives pay up hefty ransoms.

"There are 32 graves, four bodies have now been exhumed and are on their way... to hospital for an autopsy," Sathit Thamsuwan, a rescue worker who was at the scene soon after the site was found, told AFP, saying it was unclear how they had died.

"The bodies were all decayed," he said, adding a single emaciated man from Bangladesh survived and was being treated at a hospital in nearby Padang Besar.

"There are 32 places that look like graves and whether there is one body or several bodies in those graves, we will we have to wait and see," he said.

He said the smugglers were believed to have abandoned the sick man when they moved Rohingya migrants across the border into Malaysia two days ago.

Rescue workers and forensic officials inspect the site of a mass grave uncovered at an abandoned jungle camp in the Sadao district of Thailand&39;s southern Songkhla province bordering Malaysia on May 1, 2015.  (Picture: AFP / Stringer)

Local media said the camp and its lone survivor were stumbled upon by villagers looking for mushrooms.

The hospital confirmed the Bangladeshi man had survived and said he was in a stable condition.

A senior official from Sadao said exhumations had now stopped pending the arrival of forensic teams.

Tens of thousands of migrants from Myanmar, mainly from the Rohingya Muslim minority but also increasingly from Bangladesh, make the dangerous sea crossing to southern Thailand, a well-worn trafficking route often on the way south to Malaysia and beyond.

Thousands of Rohingya -- described by the UN as one of the world&39;s most persecuted minorities -- have fled deadly communal unrest in western Myanmar&39;s Rakhine state since 2012.

Chris Lewa, from the Arakan Project which monitors the smuggling routes, said survivors of the jungle camps often described horrific conditions as they waited for relatives to pay ransoms.

"If police find a camp and start digging you can bet they will find graves," she told AFP.

Last week UN Secretary General Ban Ki-moon described the condition of such camps as "untenable", adding that their existence should "remain a matter of profound concern for the international community".

Thailand has been criticised in the past for pushing boatloads of Rohingya entering Thai waters back out to sea, and for holding migrants in overcrowded facilities.

The ruling junta says it has taken significant steps to combat trafficking since June, when the United States dumped Thailand to the bottom of its list of countries accused of failing to tackle modern-day slavery.

In January, Thai authorities confirmed more than a dozen government officials -- including senior policemen and a navy officer -- were being prosecuted for involvement or complicity in human trafficking.

Lewa said the junta&39;s crackdown had forced many Thai smugglers into hiding, reducing the numbers held in jungle camps in recent months.

But smugglers have simply switched tactics, she said, keeping desperate migrants in rickety boats at sea for endless weeks.

"We fear there may be thousands stuck at sea because they can&39;t disembark. The camps have effectively been transferred from the jungle to international waters," she said.

Two weeks ago she interviewed a 15-year-old boy who had made it to Malaysia.

Rather than hold him in a Thai jungle camp, he was kept for six weeks on a boat, awaiting payment from his relatives.

"During his time at sea he said he saw at least 30 people die. They were thrown overboard," she said.