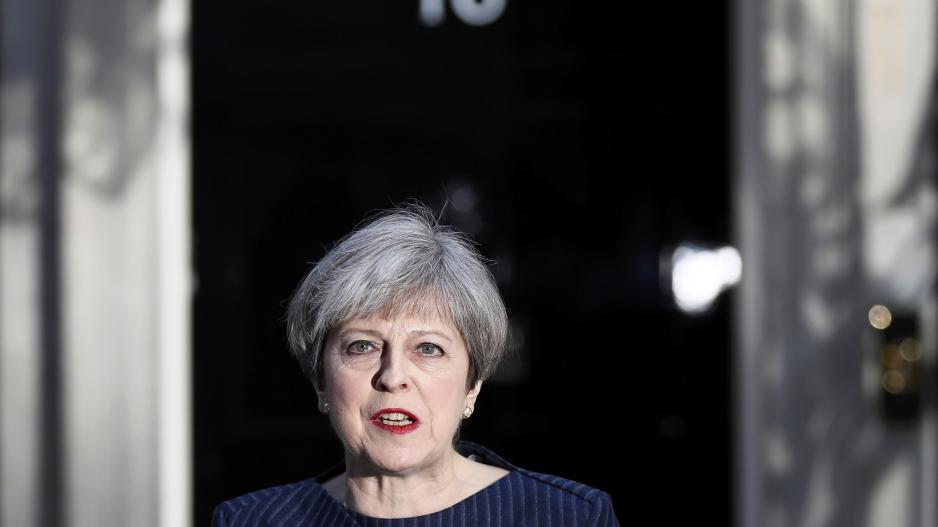 British Prime Minister Theresa May called for an early election on 8 June, saying the government had the right plan for negotiating the terms of Britain's exit from the European Union.

LONDON - British Prime Minister Theresa May hosted a "useful working dinner" with key EU Brexit negotiators on Wednesday, as the bloc hardens its position ahead of a summit to lay down its "red lines".

May greeted European Commission President Jean-Claude Juncker outside 10 Downing Street ahead of their first face-to-face talks since she triggered the two-year process of withdrawing from the European Union.

The EU has toughened its strategy, making new demands over financial services, immigration and the bills Britain must settle before ending its 44-year-old membership in the bloc.

Ahead of the meeting May's spokesman predicted the rights of EU citizens would be on the table, although Downing Street gave little detail of the dinner discussions.

"The PM had a constructive meeting this evening with President Juncker of the European Commission.

"Following the UK's letter of notification under Article 50, she reiterated the UK's commitment to achieving a deep and special partnership with the European Union," a statement from the prime minister's office said.

The EU's latest draft negotiating guidelines, agreed on Monday by Barnier and European diplomats, point to months of difficult talks ahead as Brussels seeks to ensure Britain does not get a better deal outside the bloc than inside.

According to the document, seen by AFP, the other 27 EU countries will seek to hold Britain liable for the bloc's costs for at least a year after it leaves in 2019 -- longer than was previously proposed.

Britain will also be required to give EU citizens permanent residency after living there for five years, in a challenge for May's Conservative government, which has vowed to limit immigration.

The guidelines recommend that Britain's dominant finance industry will not necessarily be covered by any future trade deal with the EU and that it must also stick to the bloc's rules if it wants easy access to EU markets.

May has committed to pulling Britain out of Europe's single market to end free movement of EU citizens into Britain, but says she wants to form a new partnership with the bloc.

Ahead of the dinner Davis said there would be "difficult issues to confront" in the negotiations, but the chief Brexiteer asserted that Britain "has a very good reason to feel optimistic".

After starting the Article 50 process of leaving the EU last month, May is seeking to shore up her mandate for the Brexit talks in a snap election on June 8, with polls suggesting her Conservatives will return with an increased majority.

But Poland's EU transport commissioner Elzbieta Bienkowska warned in an interview with Germany's Die Welt newspaper that Britain "can't have everything in the end. They can't have their cake and eat it".

And Ireland's EU agriculture commissioner Phil Hogan said Britain was no competition for the bloc when it came to securing trade deals.

"It will be a long time before the UK gets a third country deal ahead of the EU. There's been clear evidence of that in recent times," he told reporters in Brussels.

"Size matters when it comes to trade deals."

The leaders of the other 27 EU nations will meet on April 29 to set down the bloc's red lines, though the talks will not begin until June.