May orders inquiry into London fire as death toll rises 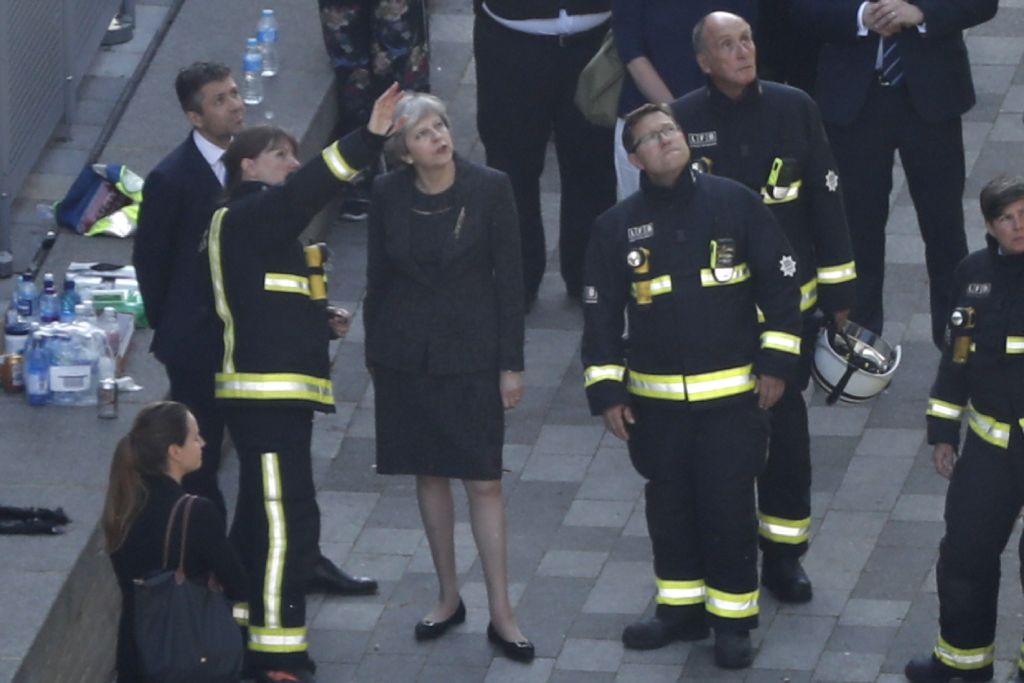 British Prime Minister Theresa May (C) speaks with Dany Cotton (L), London Fire Brigade commissioner as she visits the remains of Grenfell Tower, a residential tower block in west London which was gutted by fire on June 15, 2017.

"We owe that to the families, to the people who have lost loved ones and the homes in which they lived," said May, as firefighters said parts of the council-owned building in west London had become structurally unsafe.

The prime minister said the inquiry, an official review of action by public institutions, was needed to ensure "this terrible tragedy is properly investigated".

Today, I spoke with residents of Grenfell Tower. We must & will do everything in our power to ensure the truth about this tragedy comes out. pic.twitter.com/28EHTVeAMS

Seventeen people have been confirmed dead and the number is expected to rise, with Fire Commissioner Dany Cotton telling Sky News there were still "unknown numbers" of people inside.

"Tragically now we are not expecting to find anyone else alive," she said.

The 24-storey Grenfell Tower was home to around 600 people when the fire ripped through the building before dawn on Wednesday.

Whole families remain missing after the fire which forced residents to flee through black smoke down the single stairwell, jump out of windows or even drop their children to safety.

Around 35 appeals to find missing loved ones have been made in the press and on social media so far.

Questions are growing about how the flames spread so quickly, engulfing the tower's 120 apartments in what fire chiefs said was an unprecedented blaze.

Opposition leader Jeremy Corbyn, who visited the tower on Thursday after the prime minister, said "some very hard questions must be answered" about how the fire took hold.

"We have to get to the bottom of this -- the truth has got to come out and it will," he told volunteers at a local church.

The focus of criticism centres on the cladding fitted to external walls on the 1970s concrete block as part of a £8.7 million refit ($11 million, 9.9 million euros) completed last year.

According to the BBC, the cladding had a plastic core and was similar to that used by high-rise buildings in France, the United Arab Emirates and Australia, which had also suffered fires that spread.

Rydon, the firm responsible for the refit, said the project "met all required building regulations".

Harley Facades, which fitted the panels, told the BBC: "At this time, we are not aware of any link between the fire and the exterior cladding to the tower."

'We saw them dying'

Grenfell Tower is part of a social housing estate in north Kensington, just streets away from some of the most expensive homes in the world in Notting Hill.

The area has a large immigrant population, but many families have lived in the area for years, passing on their low-rent homes to their children.

Witnesses told how residents in the upper floors used their mobile phone torches to attract attention, before they disappeared from view, their screams of help falling silent.

"We saw them dying," said Adi Estu, 32, who was evacuated from her home nearby.

A resident of Grenfell Tower breaks down as he describes seeing people throw children to safety, and people jumping out of windows. pic.twitter.com/OJDPBvLci4

Some people reportedly jumped from the windows, and one witness, Samira Lamrani, said she saw a woman drop a baby from the ninth or 10th floor, for the child to be caught by a man below.

The fire triggered a fresh wave of mourning in a country already battered by a string of terror attacks.

More than £480,000 had been raised online for the victims by early Thursday, while local community centres were inundated by donations of clothes and food.

Volunteers in Glasgow -- 550 kilometres (350 miles) away -- sent a truck laden with nappies and other supplies.

Queen Elizabeth II sent her condolences, paying tribute to the bravery of the emergency services.

"It is also heartening to see the incredible generosity of community volunteers rallying to help those affected by this terrible event," she in a statement.

Cladding has been added to a number of buildings across London in recent years, intended to provide insulation as well as improve the appearance of older buildings.

But Kostas Tsavdaridis, associate professor of structural engineering at the University of Leeds, warned: "Some materials used in facades act as significant fire loads."

"Although theoretically they are fire resistant, in most cases they are high-temperature resistant instead of fire resistant. But even if they are, smoke and fire will spread through the joints and connections," he said.

There were questions about why there was no sprinkler system in the Grenfell Tower which could have helped stop the fire spreading, or any central smoke alarm system that would have woken sleeping residents.

Official fire service advice for residents to stay in their homes and use towels to block out smoke, while awaiting help, has also come under scrutiny.

Firefighters were able to reach only the 12th floor of the block during the height of the blaze.

Abdelaziz El-Wahabi, his wife Faouzia and their three children were among those who followed protocol by staying in their flat on the 21st floor.

"Last time I spoke to his wife, he was on the phone to the fire brigade. I've not heard from them since," his sister Hanan Wahabi told AFP on Wednesday morning.

David Collins, former chairman of the Grenfell Tower Residents' Association, said the building's management had failed to listen to residents' calls for improvements on fire safety.

"If the same concerns were had in a wealthy part of Kensington and Chelsea they would have got resolved, but here they didn't get resolved," Collins told AFP.