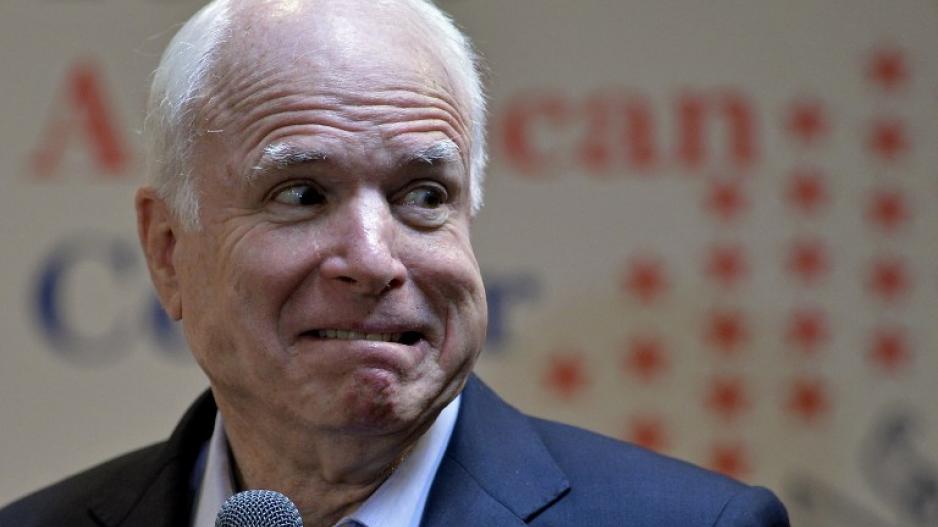 US Senator John McCain reacts as lightning hit a nearby building while answering questions from students of the Japan-America Student Conference (JASC) at the Tokyo American Center in Tokyo on August 21, 2013.

MOSCOW - The Russian Communist Party on Saturday responded with bafflement to an announcement by US Senator John McCain that he planned to write an op-ed piece for its official organ, Pravda, saying he had never contacted the newspaper.
McCain&39;s spokesman Brian Rogers said Friday that the senator had accepted an offer from Pravda and would submit an opinion piece in response to President Vladimir Putin&39;s comment published in The New York Times on Thursday.
But the Communists said they had heard nothing of the offer.
"There is only one Pravda in Russia, it is the organ of the Communist Party, and we have heard nothing about the intentions of the Republican senator," the editor of Pravda, Boris Komotsky wrote in a statement on the party&39;s website.
Communist Party leader Gennady Zyuganov also told the website that "it is surprising that McCain did not bother to inform either the leadership of the party or the editors of Pravda."
The confusion appeared to have arisen because The Cable, the website of the US magazine Foreign Policy contacted Pravda.ru, an electronic news website that is not connected to Pravda newspaper, with the suggestion.
No one at Pravda.ru was immediately available to comment.
The two publications could hardly be more different. One of Russia&39;s first news websites, Pravda.ru currently has a photograph of US burlesque performer Dita Von Teese on its main page.
By contrast, the Pravda newspaper is handed out by activists at parades and its front page is still topped by Lenin&39;s profile.
Pravda ("Truth" in Russian) was founded in 1912 by Bolshevik revolutionaries and served as the mouthpiece for the Kremlin until the 1991 break-up of the Soviet Union.
Zyuganov said however that McCain could write a piece for Pravda, but only if he followed the party&39;s policy on Syria.
"Our answer to McCain is this: if you support the position of the Russian Communist Party on Syria, then we will publish your article."
This appeared unlikely since Zyuganov added that in the Communists&39; view, the United States is "trying to destroy our last ally in the Middle East, Syria. And one of the most rapacious hawks calling for direct aggression is Senator John McCain."