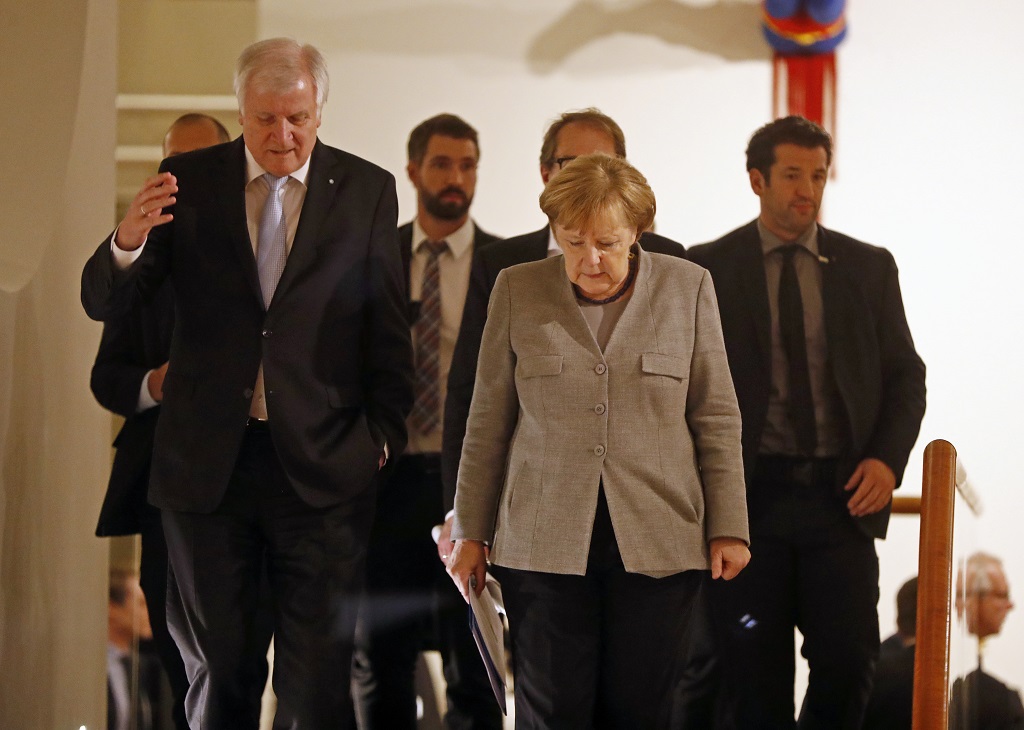 Chairman of the Bavarian Christian Social Union (CSU) party, Horst Seehofer (L) and German Chancellor and leader of the Christian Democratic Union (CDU) party, Angela Merkel are seen during a break in exploratory talks with members of potential coalition.

BERLIN - A renewed coalition between Chancellor Angela Merkel&39;s CDU/CSU conservatives and the centre-left Social Democrats is "the best option for Germany", CSU head Horst Seehofer said Sunday, raising hopes for an end to the political impasse.

Merkel has been scrambling to avert snap elections after talks to form a new government with the pro-business Free Democrats (FDP) and the left-leaning Greens broke down a week ago.

The Social Democrats had vowed to go into opposition after a disappointing showing in the September general election, but in a U-turn on Friday SPD chief Martin Schulz said he was ready for talks with Merkel&39;s bloc.

"An alliance between the conservatives and the SPD is the best option for Germany, better in any case than &39;Jamaica&39;, new elections or a minority government," Seehofer, the leader of Merkel&39;s Bavarian sister party, told the Bild am Sonntag newspaper.

The failed three-way tie-up between the CDU/CSU, the Greens and the FDP had been dubbed "Jamaica" because the parties&39; colours match those of the Caribbean country&39;s flag.

Merkel, who has baulked at the idea of a repeat election, on Saturday said she wanted to form a government "very soon".

Talks with the SPD should be based on "mutual respect" and "compromise", she added.

The veteran chancellor, who is eyeing a fourth term, will meet with top brass from her CDU party on Sunday evening to discuss the way forward.

A breakthrough could come on Thursday when German President Frank-Walter Steinmeier hosts talks between Merkel, Seehofer and Schulz.

Schulz had categorically ruled out another stint as junior coalition partner after four years of governing in Merkel&39;s shadow led the SPD to its worst result in decades in the September 24 poll.

But with Europe&39;s top economy facing prolonged political uncertainty after the collapse of the Jamaica talks, and with fears that snap polls would mainly benefit the far-right AfD, Schulz bowed to pressure to soften his stance.

An Emnid survey for the Bild newspaper on Sunday showed that 52 percent of Germans were in favour of a repeat left-right "grand coalition".

Seehofer warned the SPD however not to come to the negotiating table trying to dictate terms.

"I can only advise the SPD not to enter into talks with the conservatives with exaggerated demands, but to stay realistic," he told the Bild daily.

"There shouldn&39;t be a grand coalition at any price."

FDP leader Christian Lindner, who triggered Germany&39;s crisis when he unilaterally pulled out the Jamaica talks last Sunday, also said he expected to see the SPD agree to another stint in government.

"The hurdles are lower for them than for us," Lindner told Bild am Sonntag.

He said a "Jamaica" coalition would have "shattered into a thousand pieces within months", given the parties&39; differing views on everything from migration to climate protection to eurozone reforms.