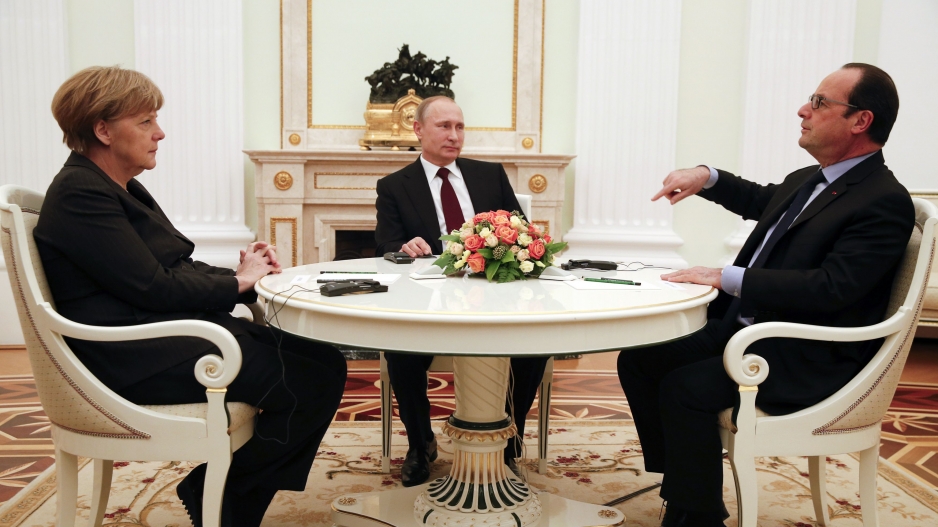 German Chancellor Angela Merkel and Russia's President Vladimir Putin (C) listen to French President Francois Hollande during a meeting on resolving the Ukraine crisis at the Kremlin in Moscow February 6, 2015.

The three leaders agreed to work out a joint document to implement a five-month old truce that they will discuss with Ukrainian President Petro Poroshenko during a telephone conference Sunday, Putin spokesman Dmitry Peskov said.

He said that the talks were "substantial and constructive."

No aides were present at the closed-door meeting, which lasted more than five hours.

Details of the plan were not released. Russian media reports suggested that the leaders agreed to respect a new ceasefire line that concedes territorial gains to the pro-Russian separatists.

The original peace agreements signed in September in Minsk are in tatters after pro-Russian separatists launched a new offensive in January.

Before Friday&39;s Moscow talks, both leaders cautioned that there was no guarantee of success.

"We know it is completely open whether we&39;ll manage to achieve a truce ... or if further talks will be required," Merkel said in Berlin.

She and Hollande were not neutral mediators but acting in the interests of "Germany, France and, first and foremost, Europe," Merkel said.

In Paris, Hollande said that a ceasefire was only the first step to resolve the conflict in eastern Ukraine: "We need to find a comprehensive solution."

US Vice President Joe Biden said that Ukraine is fighting for survival and needs US and European Union support.

"President Putin continues to call for new peace plans as his troops roll through the Ukrainian countryside, and he absolutely ignores every agreement that his country has signed in the past and we have signed recently, including in Minsk," Biden said in Brussels.

German Defence Minister Ursula von der Leyen warned that arms shipments to Kiev, as considered by the United States, would not be helpful to solve the "hybrid war" that Russia was waging in Ukraine - a combination of intelligence and military operations, political destabilization and a massive propaganda campaign, all of which are present in Ukraine, the minister said.

"A focus on arms alone can be a fire accelerant that only removes us further from a solution," von der Leyen told the Munich Security Conference.

Merkel and Poroshenko will address the conference Saturday in Munich, along with Biden and Russian Foreign Minister Sergei Lavrov.

On Monday, Merkel is due in Washington for talks with US President Barack Obama.

The conflict in eastern Ukraine has claimed more than 5,000 lives since last year, 200 in the last three weeks alone, according to the United Nations.

The separatists and the Ukrainian government agreed Friday on a temporary truce to evacuate civilians from the embattled city of Debaltseve.

Fighting has centred for days on the east Ukrainian rail hub, where the separatists claim to have government-troops besieged.