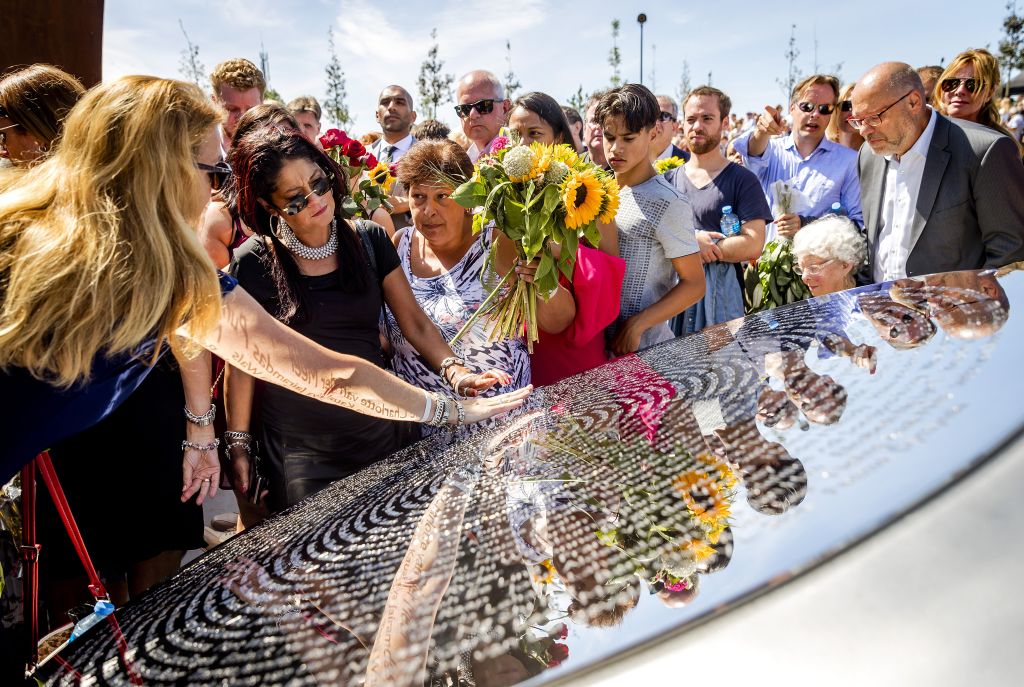 Three years after Flight MH17 was shot down by a missile over war-torn Ukraine, more than 2,000 relatives gathered for the unveiling of the "living memorial" National Monument for the MH17 victims in Vijfhuizen, on July 17, 2017.

VIJFHUIZEN, Netherlands - Three years after Flight MH17 was shot down by a missile over war-torn Ukraine, nearly 2,000 relatives gathered Monday to unveil a "living memorial" to their loved ones.

A total of 298 trees have been planted in the shape of a green ribbon, one for each of the victims who died on board the Malaysia Airlines flight en route from Amsterdam to Kuala Lumpur.

Today National Monument #MH17 will be unveiled in Vijfhuizen #NL commemorating all victims of the crash 3 years ago https://t.co/5m8Gq7uzJL pic.twitter.com/vZBWXNu11t

Dutch King Willem-Alexander and Queen Maxima joined government and international officials at a solemn ceremony to dedicate the memorial in the park of Vijfhuizen, close to Amsterdam's Schiphol airport, where the flight took off from on July 17, 2014.

The names of all the 298 passengers and crew killed in the disaster were read out by their emotional families, and the Dutch royals and others laid flowers.

While most of the victims were Dutch, there were 10 nationalities on board including Australians, Britons, Malaysians and Indonesians.

"It's three years to the day that MH17 was shot down in mid-air," said Evert van Zijtveld, the head of association of the victims' families.

"These victims can never be forgotten," he said. "This monument is for now and for future generations."

"A tree symbolises 'hope' and 'future' in many cultures," the victims' families association said in a statement.

"We not only want to honour the MH17 victims, but also want to create a place where everyone can keep their memories of the 298 passengers alive."

Funded by donations, the project was designed by artist Ronald A. Westerhuis and landscape architect Robbert de Koning after it was chosen out of three proposals by relatives in late 2015.

As the third anniversary of the tragedy dawns, no suspects have been arrested although it was announced this month that any trials would be held in The Netherlands.

About 100 people are wanted in connection with the disaster, after Dutch-led investigators concluded the plane was shot down by a Russian-made BUK missile transported from Russia into areas held by pro-Moscow rebels.

In Kiev, Ukrainian President Petro Poroshenko on Monday insisted Moscow must be held to account over the tragedy.

"It was a barefaced crime that could have been avoided if not for the Russian aggression, Russian system and Russian missile that came from Russian territory," Poroshenko wrote on Facebook.

Russia and the separatist authorities it supports, however, continue to deny any involvement and have sought repeatedly to deflect the blame onto Ukraine.

UN Secretary General Antonio Guterres said in a statement his thoughts were with the victims' families and urged "all states to cooperate fully with efforts to establish accountability" for the incident.

The trees in the memorial will be surrounded by sunflowers, which bloom in July, and will "radiate a golden glow", the foundation said.

The flowers also represent "the sunflower fields in eastern Ukraine where some parts of the plane wreckage were found".

Each of the trees bears the name of one of the victims. And at the heart of the forest of 11 different tree varieties is a steel memorial shaped like an eye, turned upwards looking at the skies.

One apple tree has been dedicated to 16-year-old Gary, from Rotterdam, whose body has still not yet been identified.

The 16-metre-long steel eyebrow above the eye represents "the burden of the loss," the Trouw daily said, adding with time it will rust, a symbol of the slow passage of pain. The victims' names are also engraved in the pupil of the eye.

"If you look inside, you can see both yourself and the name of your loved one," Westerhuis told Trouw.