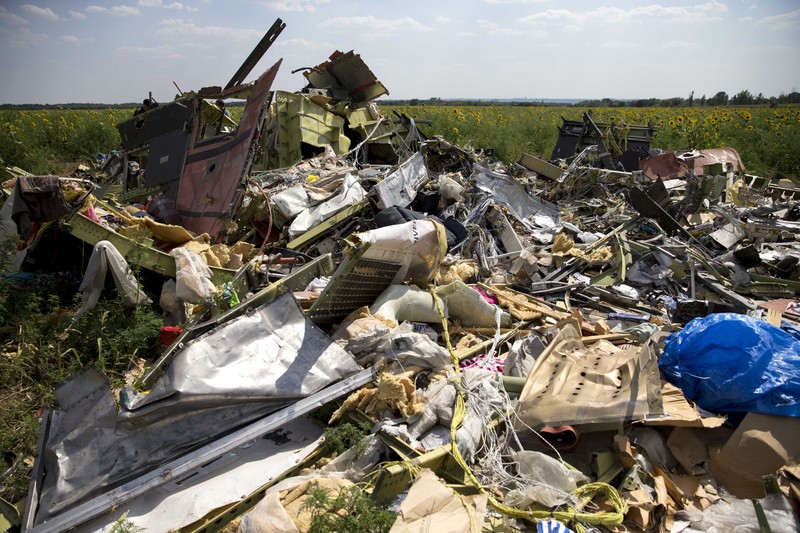 Debris of the Boeing 777 at the Malaysia Airlines Flight MH17 plane crash site, near the village of Rozsypne in Eastern Ukraine. Investigators searched a second site of wreckage from the aircraft in the rebel-controlled region.

NIEUWEGEIN, Netherlands – The missile that downed flight MH17 over eastern Ukraine was transported from Russia, a criminal inquiry revealed on Wednesday, announcing about 100 people were being investigated for playing "an active role" in the disaster.

Saying they had "irrefutable evidence" that the BUK missile system was used to blow the Malaysia Airlines plane out of the sky, investigators also confirmed the device was fired from a field in a part of eastern Ukraine then controlled by pro-Russia separatists.

The findings of the Dutch-led probe stopped short of directly accusing Moscow of involvement in the tragedy in July 2014, and both the rebels and Russia issued fresh statements denying any responsibility.

But the new details appeared to back up long-standing accusations from Ukraine and the West that pro-Russian rebels were to blame using a missile which may have been provided by Moscow.

The Boeing 777 was ripped apart mid-air during a flight from Amsterdam to Kuala Lumpur over Ukraine, where a war pitting separatists allegedly armed by Russia against the Kiev government erupted in April 2014.

All 298 people on board the plane including 196 Dutch citizens were killed.

But despite two official international investigations, the burning questions of who gave the orders and who pulled the trigger remain unresolved.

Ukraine said the inquiry proved Russia's "direct involvement" in the tragedy, adding it put "an end to all of Russia's attempts to discredit the activities and conclusions" of the inquiry team.

And one relative told AFP the results "clearly suggest the involvement of the Russian Federation."

A "BUK missile from the 9M38-series" was used that "came from the territory of the Russian Federation", said Wilbert Paulissen, the head of the Dutch police investigation.

It was transferred in Ukraine onto a white Volvo truck and escorted by armed men in uniform. Afterwards the missile launcher system "was taken back to Russia", Paulissen said.

Using thousands of photos, videos, some 200 witness statements and 150,000 tapped telephone conversations, the investigators have retraced the route taken by the convoy which brought the missile system into eastern Ukraine.

In one chilling wiretapped phone conversation from July 16, 2014 played to reporters on Wednesday, one man believed to be a Russian-speaking military commander asks another if he can "receive a BUK in the morning" saying his forces are under pressure from air strikes and he doesn't know if "they can hold on".

The 700kg BUK, a complex radar-guided anti-aircraft weapon, was fired from a field in Pervomaiskyi which at the time "was in the hands of the Russian separatists", said Paulissen.

The joint investigation "has identified approximately 100 people" believed to have had an "active role" in the transporting of the missile system used to bring down the routine flight, added chief investigator Fred Westerbeke said.

Moscow, which has always denied having any role in the disaster, described the inquiry on Wednesday as "biased" and "politically motivated" saying it was "disappointed" in the results.

International investigation: MH17 was struck by a Russian-made missile pic.twitter.com/3lzIFNoaf2

Ukrainian rebels also quickly rejected any conclusion that they were behind the disaster.

"The forces of the People's Republic of Donetsk could not have fired at the plane from a BUK system because we have no such sort of weapons," general Eduard Basurin of the self-proclaimed republic told AFP.

The investigation has been headed by the Dutch prosecution service, but includes teams from Australia, Belgium, Malaysia and Ukraine, who also briefed relatives Wednesday.

"What is clear is that the BUK missile system came from Russia to Ukraine, was fired and taken back to Russia," Piet Ploeg, who lost three relatives in the disaster, told AFP.

The findings "clearly suggest the involvement of the Russian Federation", he added.

Justice yet to be done

The criminal investigation has now been extended to 2018, but Westerbeke said he could make "no promises" about when any suspects would be brought to justice.

"Apart from wanting to know exactly what weapon was used and where it was fired from, we also want an answer as to where we go from here," said Evert van Zijtveld, chairman of the foundation that supports families of MH17 victims.

"We want to see the perpetrators caught and put on trial," said Zijtveld who lost his 18-year-old son Robert-Jan and daughter Frederique, 19, in the tragedy.

Dutch Prime Minister Mark Rutte called the preliminary findings "an important step on the road to the ultimate goal: finding and prosecuting the perpetrators".

But no decision has been made on what form an eventual tribunal will take in a process some experts say may still take years.

Should any Russian suspects in any event be identified, chances are small that they'd be prosecuted, as the Russian constitution expressly forbids Moscow from extraditing its citizens to another country.

Meanwhile, Russia remains under sanctions imposed by the EU, which along with other countries accuses Moscow of actively backing the pro-Russia separatists.