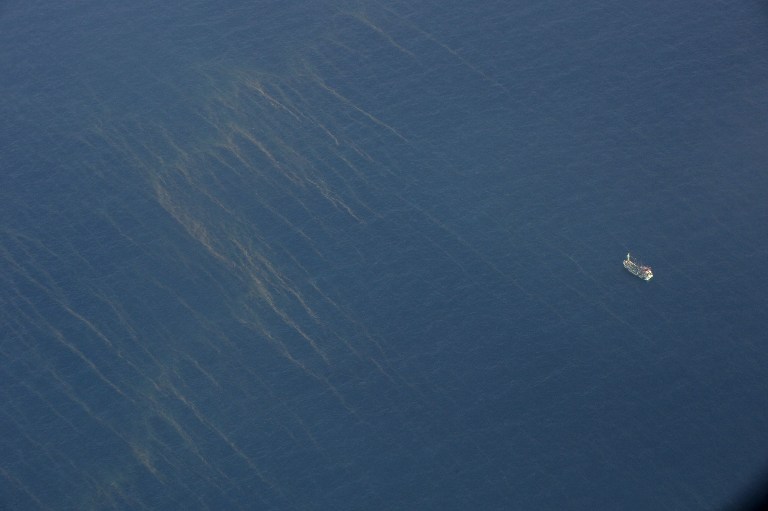 Aerial picture taken from aboard a Soviet-made AN-26 used as a search aircraft by Vietnamese Air Force to look for missing Malaysia Airlines flight MH370, shows a boat sailing past oil an oil slick off Vietnam's southern coast on March 9, 2014.

SINGAPORE - Nearly three days after it disappeared while en route from Kuala Lumpur to Beijing, mystery still shrouds the fate of Malaysia Airlines flight MH370 and the 239 people on board.

No debris from the Boeing 777-200ER has been recovered despite an international search involving the navies and air forces of several Asian nations as well as the United States.

Here are some of the questions surrounding the disappearance and the search, and answers by industry experts who spoke to AFP:

Q: Could the plane have disintegrated in mid-air?

The failure of the plane&39;s pilots to send a distress signal has given rise to speculation there was a sudden catastrophe -- possibly caused by a mechanical failure or an explosion.

The lack of wreckage recovered so far also suggests a high-altitude disaster which spread debris across an area too wide to be easily detected.

"If it had been an impact at sea level of the whole craft, chances are more debris will be found immediately," said Chris de Lavigne, an expert on aerospace and defence issues at business consultancy Frost & Sullivan.

Sudden, accidental structural failures are considered extremely unlikely in today&39;s passenger aircraft. This is especially so with the Boeing 777-200, which has one of the best safety records of any jet.

Authorities said the plane was at cruising altitude, 35,000 feet above sea level, when it last made contact.

"It&39;s the safest point in the flight," de Lavigne said. "It&39;s an extremely safe aircraft with very, very few incidents in its history. This is just overly puzzling."

Q. Have there been other plane mysteries like this?

Air France flight 447 crashed into the Atlantic Ocean in June 2009 while on a flight from Rio de Janeiro to Paris, killing 216 passengers and 12 crew. Debris was not found for days and it took years to locate the wreckage. Investigators eventually concluded that both technical and human error were to blame for the tragedy.

Adam Air flight 574 with 102 people on board disappeared from radar in January 2007, also at its cruise phase during a domestic flight in Indonesia. Debris was found nine days later after an extensive search and it took months to recover the plane&39;s black box.

Q: What are the theories on what happened to MH370?

"The other is when there is a simple problem and then the crew tries to diagnose it, gets caught up in it and then they don&39;t realise what&39;s happening and the plane crashes. That&39;s what happened with the Air France case. At the moment, until we find anything, it has to be one of these two scenarios."

De Lavigne said that at this stage, with so little information, all possibilities must be considered.

"It&39;s either a serious mechanical failure or something a little bit more sinister," he said.

"It&39;s pretty surprising that there was no SOS call from the plane and it just disappeared. It would lead to the conclusion that something fast and drastic happened."

Malaysian authorities have launched a terror investigation, but are refusing to rule anything out, including a possible hijacking.

Q: Why is it so hard to find evidence?

The region being searched, including the Gulf of Thailand and the South China Sea, are busy shipping lanes with large amounts of flotsam that will complicate the search for any wreckage.

"When they see something, it is not blatantly obvious that it is a wing or tail. They have to go and examine what it is, it takes time," Soejatman said.

Q: Why have authorities not picked up any signals?

Aircraft have an Emergency Locator Transmitter (ELT) which is designed mainly for when the plane crashes on land and pilots are still trying to control it. In the event of a major crash, it may not work.

"Basically what this beacon does is simply say &39;I&39;ve been activated, find me!&39;" Soejatman said. "It is not fool-proof but it is the best thing that we have at the moment."

The plane also has a "black box" consisting of the cockpit voice recorder and the flight data recorder. If immersed in water they should activate a "pinger" that can draw investigators to the location. However, the sound cannot be heard over long distances.

"You need a ship equipped with a listening sonar to pick up the signal within the area," Soejatman said, cautioning however that the shallow waters of the MH370 search site could create interference.

The missing Boeing 777-200ER was also equipped with ACARS (Aircraft Communications Addressing and Reporting System), a system which sends short messages to ground controllers - either automatically or manually depending on the airline.

"If Malaysia Airlines does have these messages, that would be very useful" to determine events before it lost contact, Soejatman said.

Malaysia Airlines&39; chief executive Ahmad Jauhari Yahya told reporters at a press conference late Monday that the missing aircraft was equipped with ACARS, but did not provide any further details.

An airline representative later confirmed: "The aircraft has got the ACARS system which transmits automatically. There were no distress calls. No information was relayed."

Revelations that at least two people aboard the plane were using stolen European passports have heightened fears about a security breach.

He noted that Interpol maintains a database of stolen passports that should have raised alarms at the immigration counter.

"There are two categories of people who use these (stolen passports) - criminals and terrorists," he said.