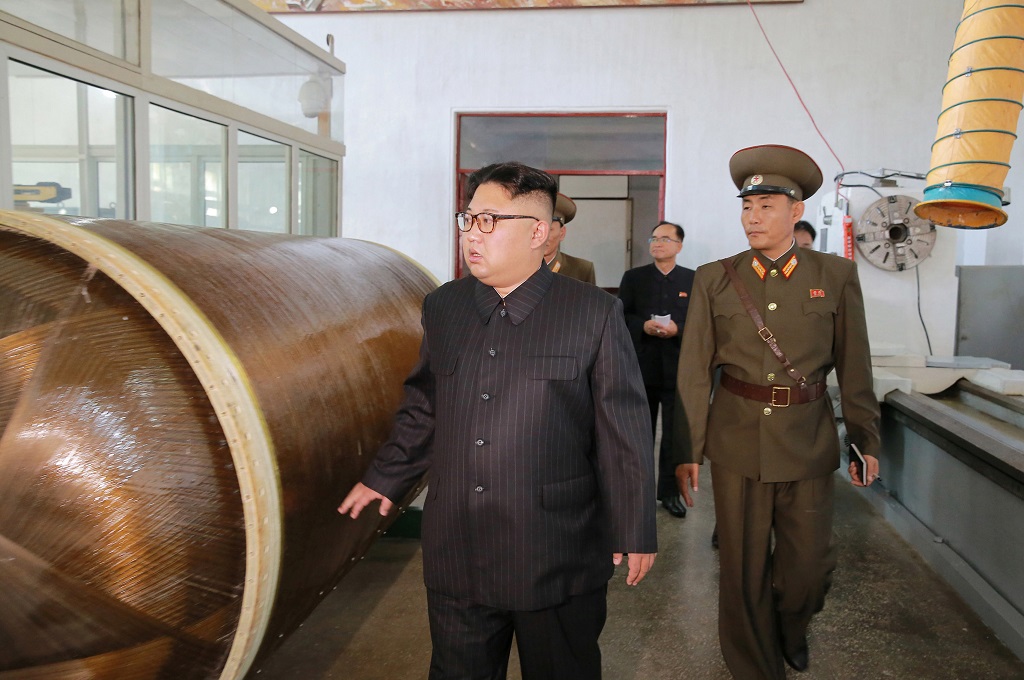 File: North Korean leader Kim Jong-Un looks on during a visit to the Chemical Material Institute of the Academy of Defense Science.

SEOUL - Nuclear-armed North Korea fired a ballistic missile over Japan on Tuesday, South Korea's military and the Japanese government said, in a major escalation by Pyongyang amid tensions over its weapons ambitions.

The missile fell into the Pacific Ocean off Hokkaido, the Japanese government said.

No North Korean missile had overflown Japan for years, and the launch came after a strained period on the peninsula following Pyongyang's testing of two intercontinental ballistic missiles (ICBMs) last month that appeared to bring much of the US mainland within reach.

It threatened to fire a salvo of missiles towards the US territory of Guam, while US President Donald Trump issued an apocalyptic warning of raining "fire and fury" on the North, saying Washington's weapons were "locked and loaded".

The United Nations Security Council imposed a seventh set of sanctions on the North, tightening restrictions on its exports, and investments into the country.

Tensions had eased more recently, but the South's Joint Chiefs of Staff said in a statement that Tuesday's missile was launched at around 2057 GMT Monday from Sunan, near Pyongyang, and travelled east "and over Japan".

It travelled around 2,700 kilometres (1,700 miles) at a maximum altitude of around 550 kilometres, it said, adding South Korea and the US were "closely analysing for more details".

"Our military has bolstered deterrence against additional provocations by the North Korean military and is closely monitoring related movements with full military readiness."

A meeting of the South's National Security Council was called, the presidential office said.

Guam is around 3,500 kilometres from North Korea.

Tokyo also said the missile overflew its territory, with Prime Minister Shinzo Abe saying the government would take "full steps" to ensure the safety of the Japanese people.

North Korea has launched a missile that flew over Japan, the Pentagon confirmed https://t.co/gIF3K0FpLT pic.twitter.com/X6khqBQDys

The firing comes days after Pyongyang launched three short-range missiles in what analysts said was seen as a minimal provocation after the start of the Ulchi Freedom Guardian South Korean-US joint military exercise, which the North sees as rehearsals for invasion.

It says it needs nuclear weapons to protect itself.

But Tuesday's flight path represents a significant escalation by Pyongyang.

When it carried out its ICBM tests last month -- which leader Kim Jong-Un described as a "gift" to "American bastards" -- it fired them on lofted trajectories that avoided travelling over Japan.

But any launch towards Guam such flights would have to pass over the Asian island nation.

Japan has in the past vowed to shoot down North Korean missiles or rockets that threaten to hit its territory, and deployed its Patriot missile defence system in response to the Guam threat, reports and officials said, with an Aegis destroyer also stationed in the Sea of Japan (East Sea).

At the time North Korea said it was launching a telecommunications satellite, but Washington, Seoul and Tokyo believed Pyongyang was testing an ICBM.