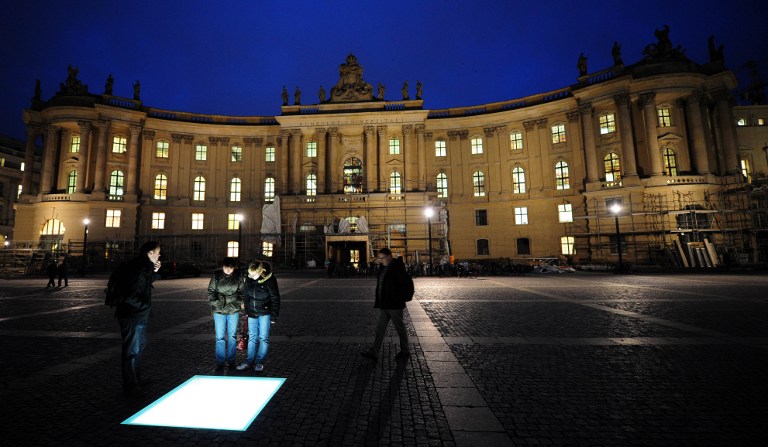 A photo taken on November 15, 2010 in Berlin shows people looking at the glass memorial by Michal Ullman for the Nazi book burning held on May 10, 1933 on the Bebelplatz square in front of the Humboldt University.

BERLIN - A glass pane set into the Bebelplatz in the heart of Berlin provides a view of an underground library whose shelves are empty.

Israeli sculptor Micha Ullman&39;s 1995 memorial is an evocative symbol of the Nazi book burning that took place here in 1933.

Berlin&39;s Opernplatz, as it then was, was not the only square where 80 years ago Nazi students burned books on May 10, scarcely three months after Adolf Hitler came to power.

Similar events took place in more than 20 cities, marking the start of a witch hunt against many of Germany&39;s best-known authors, who were condemned by the authorities as "un-German" along with many foreign writers, especially Jews.

Nazi author Hanns Johst wrote some time later that the National Socialist revolution would not hold back from moving on to the desks where literature like this was being produced.

Yet this was far from the first time books had been burned in anger in Germany.

In 1817, German students torched the Napoleonic Code of laws in commemorating the final defeat of the French emperor.

Jewish authors were also among those whose books were tossed into the flames at the time.

"That was but a prelude; where they burn books, they will ultimately burn people also," poet Heinrich Heine wrote three years later.

The German Jewish writer&39;s words proved prophetic. Within a few years of the Nazi book burnings the Holocaust was underway.

Well before the Nazis took power, they attacked authors such as Erich Maria Remarque because of his anti-war novel, All Quiet on the Western Front.

In 1929 in Hamburg, students publicly burned the Treaty of Versailles signed after the end of World War I along with the constitution of the democratic Weimar Republic.

The 1933 book burning was intended to give a boost to the "Blut-und-Boden" (Blood and Soil) ideology that was key to the Nazi world view.

Students and academic staff were expected to show their loyalty.

At the beginning of April 1933, the German Student Union, which had been co-opted by the Nazis, called for mobilisation against the "corrupt Jewish spirit."

Students were urged to inspect their own shelves before moving on to public libraries for works to be purged.

The German book trade also became involved, publishing a "banned list" that included the works of Heinrich Mann, Erich Kaestner, Arthur Schnitzler, Lion Feuchtwanger, Kurt Tucholsky and Sigmund Freud, all of whose works were seen as "immoral and decadent."

Pressure on libraries rose in a well-orchestrated campaign that reached a climax on May 6, 1933, when Nazi mobs ransacked bookshops, carting off thousands of items.

In Berlin, an attack on the institute run by sexologist Magnus Hirschfeld saw thousands of books removed for destruction.

The aim across Germany was clear. The nation was to demonstrate that it rejected the Weimar Republic and that it had "purged itself internally and externally," as propaganda chief Joseph Goebbels put it.

In preparation, 12 "fire speeches" were issued for reciting as the books of particular authors were burned.

"Against class struggle and materialism, for the national interest and an idealistic attitude to life" was one used to consign the works of Karl Marx to the flames.

In Berlin, the students marched with burning torches from the university to where trucks were waiting, loaded with around 25,000 books, before the procession moved to the Opernplatz.

There was a party atmosphere, complete with brass band and thousands of curious onlookers.

Adding to the mediaeval atmosphere were professors in full academic regalia.

They were joined by member of student associations and uniformed units of the SA, SS and Hitler Youth.

As it was raining, petrol was needed to get the flames going.

Pacifist Erich Kaestner, best known in English for his children&39;s books, witnessed the Berlin burning, which included his own works.

He later remarked on how odd it was as a writer to be banned and to see shelves where his books had once stood now cleared of them.

"Not even at Christmas when the Germans hurry through the snowbound streets to buy presents," he said.