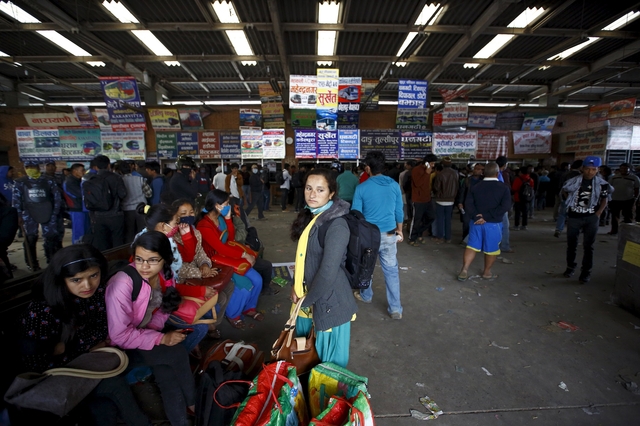 People wait for buses to head back to their village after an earthquake in Kathmandu, Nepal April 29, 2015.

KATHMANDU - Anger and frustration was mounting steadily on Wednesday morning, with many Nepalese sleeping out in the open under makeshift tents for a fourth night since Nepal&39;s worst quake in more than 80 years.

Nepali officials conceded they had made mistakes in their initial response to a massive earthquake that has killed more than 4,700 people, as survivors stranded in remote villages and towns waited for aid and relief to arrive on Wednesday.

The government has yet to fully assess the devastation wrought by Saturday&39;s 7.9 magnitude quake, unable to reach many mountainous areas despite aid supplies and personnel pouring in from around the world.

In downtown Kathmandu on Wednesday, a family living under a temporary shelter by the roadside said they had received no help so far.

"There is absolutely nothing coming from our government so far. It is sleeping. We want the Nepal government to reach us," said Shekhar Chander Rai, an earthquake survivor who was sitting alongside his two sons.

Prime Minister Sushil Koirala told Reuters on Tuesday the death toll could reach 10,000, with information on casualties and damage from far-flung villages and towns yet to come in.

That would surpass the 8,500 who died in a 1934 earthquake, the last disaster on this scale to hit the Himalayan nation of some 28 million people that sits between India and China.

Early on Wednesday, Nepal&39;s home ministry put the latest death toll at 4,768, with more than 9,600 injured. More than 80 were also killed in India and Tibet.

Click on the above video for an interview with the  a representative of the British Red Cross, Mark South, as he explains their relief efforts there.