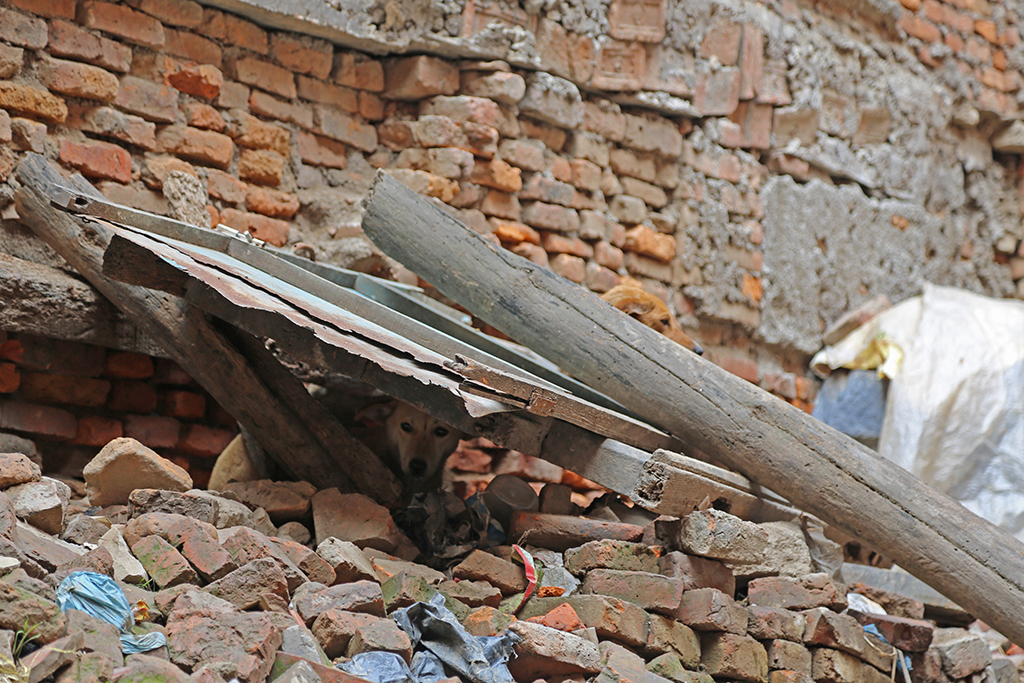 A dog hides under some debris in Harishhidi, Lalitpur in Kathmandu. A 7.8 magnitude earthquake struck the Himalayan country of Nepal on 25 April 2015.

KATHMANDU - The death toll from Nepal&39;s devastating earthquake rose steadily past 6,200 on Friday as fresh aftershocks and the stench of rotting bodies made it hard for nervous survivors to return to their homes.

Disposal of the hundreds of bodies still being found six days after the 7.9 magnitude quake devastated the Himalayan nation of 28 million people was becoming a problem for officials, who have ordered immediate cremations.

"Morgues are full beyond capacity and we have been given instruction to incinerate bodies immediately after they are pulled out," said Raman Lal, an Indian paramilitary force official working in coordination with Nepali forces.

Aid was slowly beginning to reach remote towns and villages nestled in the mountains and foothills but the overpowering smell of bodies trapped beneath the rubble of collapsed buildings in the capital was making it hard for residents to return to their homes.

Many Nepalis have been sleeping in the open since Saturday&39;s quake. According to the United Nations, 600,000 houses have been destroyed or damaged.

"This is just an initial estimate and it will take time to assess the extent of damage and calculate the cost of rebuilding," Mahat told Reuters.

The United Nations has said 8 million people had been affected, with at least 2 million in need of tents, water, food and medicines over the next three months.

Information Minister Minendra Rijal said the government would provide $1,000 in immediate assistance to the families of those killed, as well as $400 for cremation or burial.

That would surpass the 8,500 who died in a 1934 earthquake, the last disaster on this scale to hit the Himalayan nation sandwiched between India and China.

Home ministry official Laxmi Prasad Dhakal said that, even though the 1934 quake was more powerful, there were fewer people living in the Kathmandu valley then.

"The scale of reconstruction will be unprecedented," Dhakal said. "We have still not even been able to assess the damage in remote areas, which have been completely devastated."

Officials have said the chances of finding any more survivors were fading, even though a boy and a woman had on Thursday been pulled from the rubble where they had lain trapped for five days.

Anger over the pace of the rescue has flared in some areas, with Nepalis accusing the government of being too slow to distribute international aid that has flooded into the country.

It has yet to reach many in need, particularly in areas hard to reach given the quake damage, poor weather and aftershocks.

Tensions between foreigners and Nepalis desperate to be evacuated have also surfaced. In Ashrang village in Gorkha, one of the worst-hit districts about four hours by road west of Kathmandu, hundreds of villagers were living outdoors with little food and water even as boxes of biscuits, juice and sacks of rice and wheat were stored in a nearby government office.

In the Himalayas, climbing is set to reopen on Mount Everest next week after damage caused by avalanches triggered by the quake is repaired, although many have abandoned their ascents.

A massive avalanche killed 18 climbers and sherpa mountain guides at the Everest base camp.