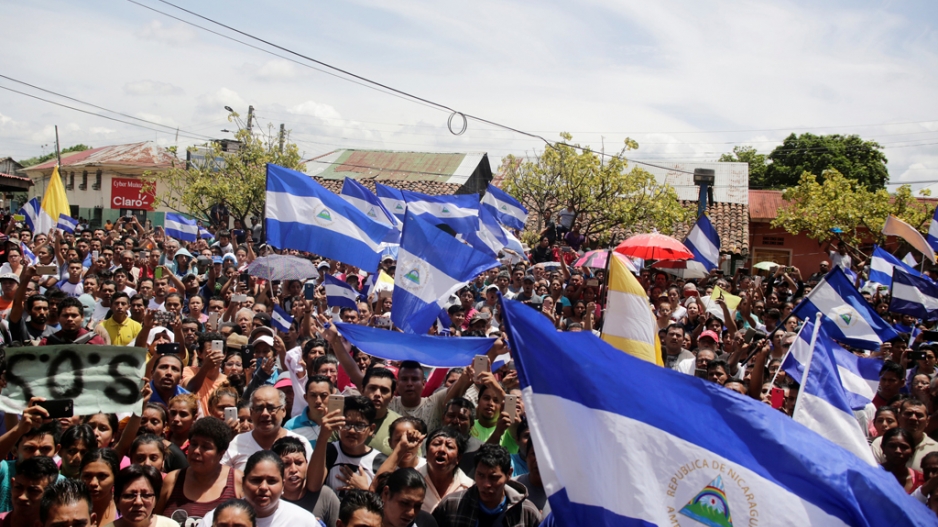 People react during the arrival of Catholic leaders as anti-government protests continue in Masaya, Nicaragua, June 21, 2018.

MANAGUA - Nicaraguan police and paramilitary forces on Saturday opened fire at a key base of university students protesting President Daniel Ortega, according to reports from the young people, the church and humanitarian groups.

"We&39;ve been under attack since 1:00 am... There are snipers too, we are in barricades because they are shooting us to kill. We have 14 injured and two dead," a young man with his face covered broadcast live on Facebook from the National Autonomous University of Nicaragua (UNAN), southeast of Managua.

Gunfire could be heard in the background.

UNAN is one of several student protest camps in Managua. About 450 students have been living there under plastic tarp tents and in class buildings, surrounded by empty bottles, old food and used rounds from their homemade mortars.

Human rights organizations have yet to confirm deaths or injuries in Saturday&39;s reported assault but denounced the government repression that has left at least 212 people dead in two months.

According to Alvaro Leiva, secretary of the Nicaraguan Pro-Human Rights Association, the attack against the university was linked to a march planned for Saturday afternoon in memory of victims of the violence.

The message "is to plant terror in the population," he said.

Later Saturday, the Nicaraguan Episcopal Conference (CEN) called upon Ortega&39;s government and the opposition to return to the negotiating table on Monday to discuss a proposal to bring elections forward from 2021 to March 2019, in a bid to end the crisis.

Ortega, 72, has not responded to the Catholic bishops&39; initiative but has previously expressed his willingness to work toward the democratization of the country.

Talks between the government and the opposition Civic Alliance have suspended once again last Monday when the government failed to allow international human rights bodies to investigate the violence.

It eventually did so on Wednesday.

Protests erupted on April 18 against now-scrapped social security reforms, but have grown into demands for justice for those killed and the exit of Ortego and his wife and vice president Rosario Murillo.

A former leftist guerrilla, Ortega led the country from 1979 to 1990 and then returned to the presidency in 2007. He is now serving his third consecutive term.