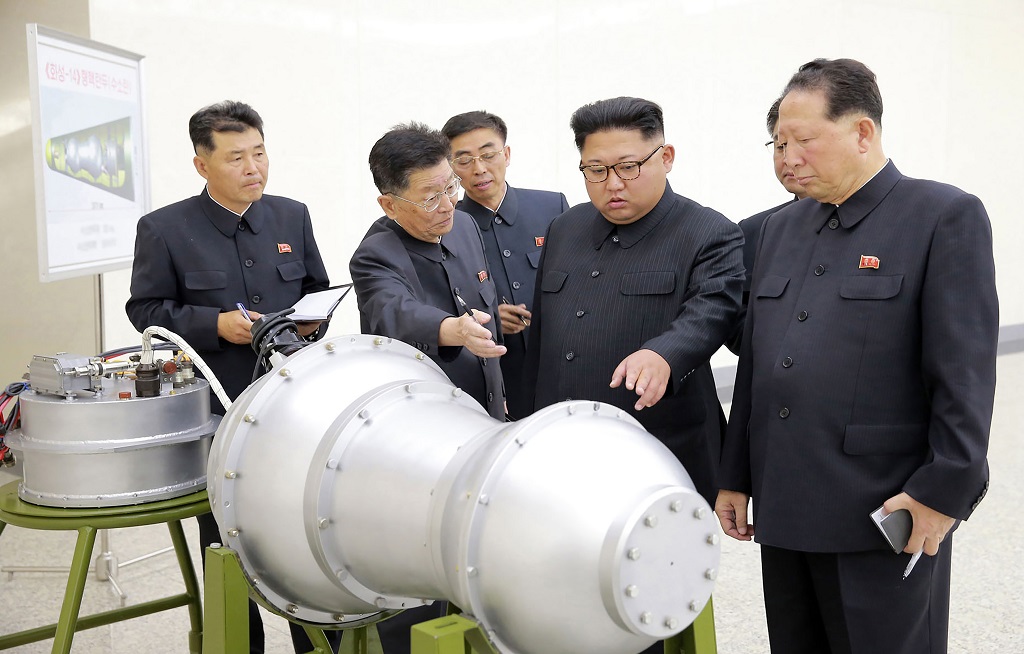 Questions remain over whether nuclear-armed Pyongyang has successfully miniaturised its weapons, and whether it has a working H-bomb, but KCNA said that leader Kim Jong-Un had inspected such a device at the Nuclear Weapons Institute.

It was a "thermonuclear weapon with super explosive power made by our own efforts and technology", KCNA cited Kim as saying, and "all components of the H-bomb were 100 percent domestically made".

North Korea triggered a new escalation of tensions in July, when it carried out two successful tests of an ICBM, the Hwasong-14, which apparently brought much of the US mainland within range.

It has since threatened to send a salvo of rockets towards the US territory of Guam, and last week fired a missile over Japan and into the Pacific, the first time time it has ever acknowledged doing so.

US President Donald Trump has warned Pyongyang that it faces a rain of "fire and fury", and that Washington's weapons are "locked and loaded".

After Pyongyang carried out its fourth nuclear test, in January 2016, it claimed that the device was a miniaturised H-bomb, which has the potential to be far more powerful than other nuclear devices.

But scientists said the six-kiloton yield achieved then was far too low for a thermonuclear device.

When it carried out its fifth test, in September 2016, it did not say it was a hydrogen bomb.

The North had "further upgraded its technical performance at a higher ultra-modern level on the basis of precious successes made in the first H-bomb test", KCNA said Sunday, adding that Kim "set forth tasks to be fulfilled in the research into nukes".

Actually mounting a warhead onto a missile would amount to a significant escalation on the North's part, as it would create a risk that it was preparing an attack.

The North Korean leadership says a credible nuclear deterrent is critical to the nation's survival, claiming it is under constant threat from an aggressive United States.

It has been subjected to seven rounds of United Nations Security Council sanctions over its nuclear and ballistic missile programmes, but always insists it will continue to pursue them.

Its first nuclear test was in 2006, and successive blasts are believed to have been aimed at refining designs and reliability as well as increasing yield.

The most recent detonation, in September last year, was its "most powerful to date" according to Seoul, with a 10-kiloton yield -- still less than the 15-kiloton US device which destroyed Hiroshima in 1945.

Atomic or "A-bombs" work on the principle of nuclear fission, where energy is released by splitting atoms of enriched uranium or plutonium encased in the warhead.

Hydrogen or H-bombs, also known as thermonuclear weapons, work on fusion and are far more powerful, with a nuclear blast taking place first to create the intense temperatures required.

No H-bomb has ever been used in combat, but they make up most of the world's nuclear arsenals.

Melissa Hanham of the Middlebury Institute for International Studies in California said the latest images released by the North could not be proved real of themselves.

"We don't know if this thing is full of styrofoam, but yes, it is shaped like it has two devices," she said on Twitter.

"It doesn't need to be shaped like that on the outside, but they threw in a diagram, just so we would get the message.

"The bottom line is that they probably are going to do a thermonuclear test in the future, we won't know if it's this object though."

Reports have suggested that Pyongyang could soon carry out a sixth nuclear test, but the respected 38 North website said last week that satellite imagery of the Punggye-ri test site showed no evidence that a blast was imminent.