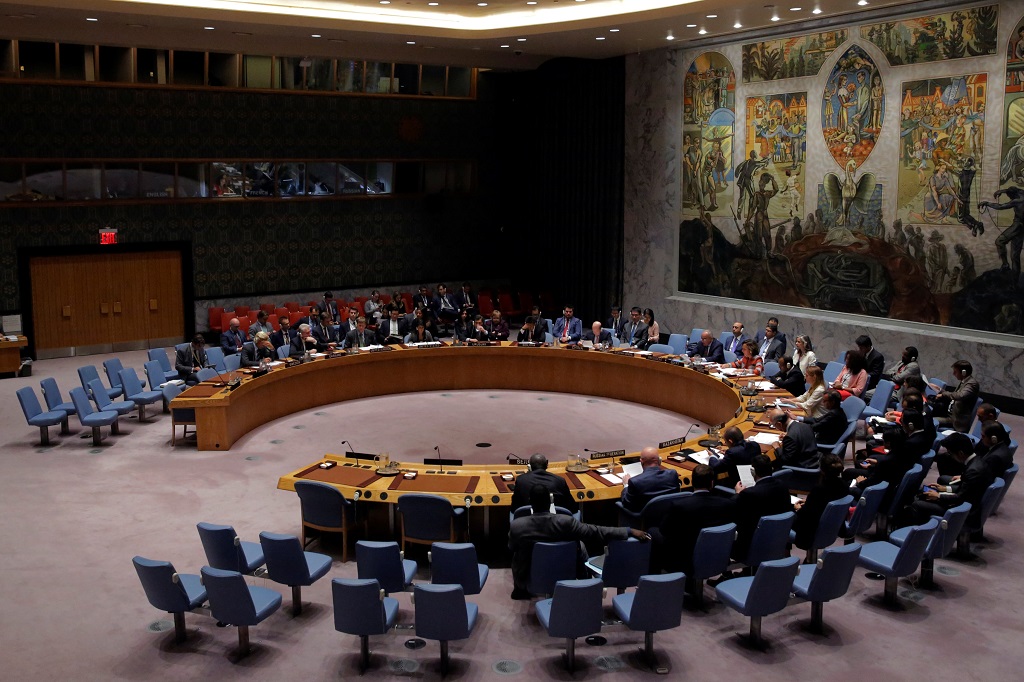 The United Nations Security Council sits to meet on North Korea after their latest missile test, at the U.N. headquarters in New York City, U.S., August 29, 2017.

SEOUL - North Korea leader Kim Jong-Un has promised more missile flights over Japan, insisting his nuclear-armed nation's provocative launch was a mere "curtain-raiser", in the face of UN condemnation and US warnings of severe repercussions.

The Hwasong-12 intermediate-range missile that Pyongyang unleashed on Tuesday represented a major escalation in the face of tensions over its weapons programmes.

In recent weeks it has threatened to send a salvo of missiles towards the US territory of Guam, while President Donald Trump has warned of raining "fire and fury" on the North.

After the latest launch, Trump said that "all options" were on the table, reviving his implied threat of pre-emptive US military action just days after congratulating himself that Kim appeared to be "starting to respect us".

The UN Security Council - which has already imposed seven sets of sanctions on Pyongyang - said in a unanimous statement the North's actions "are not just a threat to the region, but to all UN member states".

Both the North's key ally China and Russia, which also has ties to it, backed the US-drafted declaration, but it will not immediately lead to new or tightened measures against Pyongyang.

The Rodong Sinmun newspaper, the mouthpiece of the North's ruling party, on Wednesday carried more than 20 pictures of the launch near Pyongyang, one showing Kim smiling broadly at a desk with a map of the North-west Pacific, surrounded by aides.

Another showed him gazing upwards as the missile rose into the air.

READ: North Korea missile did not threaten US: Pentagon

South Korea's military said on Tuesday that it had travelled around 2,700km and reached a maximum altitude of 550km.

The official Korean Central News Agency cited Kim as saying that "more ballistic rocket launching drills with the Pacific as a target in the future" were necessary.

Tuesday's launch was a “meaningful prelude to containing Guam, advanced base of invasion", he said, and a "curtain-raiser" for the North's "resolute countermeasures" against ongoing US-South Korean military exercises which the North regards as a rehearsal for invasion.

Wednesday's statement was the first time the North acknowledged sending a missile over Japan's main islands.

Two of its rockets previously did so, in 1998 and 2009, but on both occasions, it claimed they were space launch vehicles.

Tuesday's missile overflight triggered consternation in world capitals and on the ground, with sirens blaring out and text message alerts being sent in Japan warning people to take cover.

"Threatening and destabilising actions only increase the North Korean regime's isolation in the region and among all nations of the world," Trump said in a White House statement. "All options are on the table."

At the UN Security Council emergency meeting Washington's Ambassador Nikki Haley warned that "enough is enough" and that tough action had to be taken.

"It's unacceptable," Haley said. "They have violated every single UN Security Council resolution that we've had, and so I think something serious has to happen."

The North last month carried out its first two successful tests of an intercontinental ballistic missile, apparently bringing much of the US mainland into range, but the Pentagon said Tuesday's launch was judged not to have represented a threat.

Any missile fired by the North at Guam would have to pass over Japan, and analysts told AFP that Pyongyang appeared to have chosen the trajectory as a "half-way house" option to send a message without crossing a red line.

Despite Trump's rhetoric, officials in Washington privately echo the warning by Trump's now former chief strategist Steve Bannon that it is too late for a pre-emptive strike against the North.

"There's no military solution, forget it," Bannon told the American Prospect in an August 16 interview, his last before losing his job.

"Until somebody solves the part of the equation that shows me 10 million people in Seoul don't die in the first 30 minutes from conventional weapons, I don't know what you're talking about, there's no military solution here, they got us."