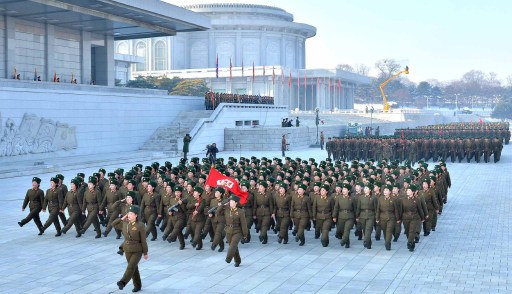 SEOUL - North Korean troops swore loyalty to their leader Kim Jong Un on Monday on the eve of the second anniversary of his taking power, the North Korean Central News Agency reported on Monday.

Thousands of soldiers lined up on the square outside Kumsusan Palace, where the bodies of Kim&39;s predecessor and father Kim Jong Il, and his own father, North Korea&39;s founder Kim Il Sung, lie in state.

Images on state television showed. "Let&39;s guard great comrade Kim Jong Un with our lives as the sole centre of unity and leadership," read a red-and-white banner raised in the square, seen in photos published by the North Korean Central News Agency.

Kim himself did not appear in the photographs. The rally follows last week&39;s unexpected execution of Kim&39;s uncle Jang Song Thaek, previously considered a powerful ally and mentor of the young leader, but convicted of plotting a coup.

The North Korean leader was expected to attend a ceremony later Monday at the Pyongyang mausoleum on the eve of the second anniversary of his father&39;s death.