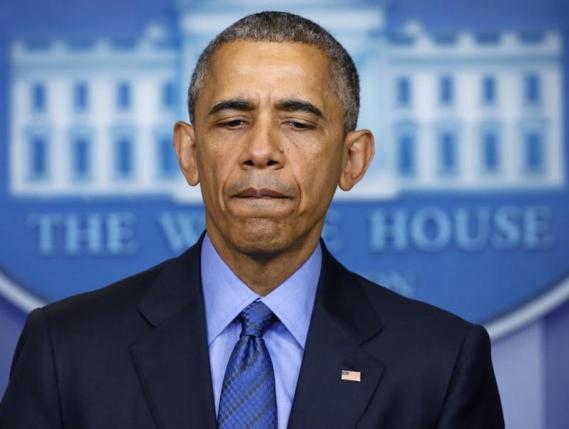 US President Barack Obama pauses while delivering remarks in reaction to the shooting deaths of nine people at an African-American church in Charleston, South Carolina.

WASHINGTON - US President Barack Obama on Thursday expressed anger over the "senseless" shooting in a black church in South Carolina and said Americans had to confront the fact that frequent incidents of gun violence do not occur in other advanced countries.

Obama, in a statement to reporters at the White House, said he and his wife, Michelle, knew Reverend Clementa Pinckney, the pastor of the historic African-American church in Charleston, who was killed along with eight others on Wednesday night.

"To say our thoughts and prayers are with them and their families and their community doesn&39;t say enough to covey the heartache and the sadness and the anger that we feel," Obama said, adding it was particularly heartbreaking that the incident occurred in a place of worship.

Obama, appearing sombre as well as frustrated, said he has had to make statements like the one he made on Thursday too many times. Despite not having all the facts, it was clear that innocent people had been killed because someone had no trouble getting a gun, he said.

"Now is the time for mourning and for healing, but let&39;s be clear: at some point we as a country will have to reckon with the fact that this type of mass violence does not happen in other advanced countries," Obama said.

"It doesn&39;t happen in other places with this kind of frequency. And it is in our power to do something about it. I say that recognising the politics in this town foreclose a lot of those avenues right now. But it would be wrong for us not to acknowledge it," he said.

US police on Thursday arrested a 21-year-old white gunman suspected of killing nine people in one of the nation&39;s oldest black churches in Charleston -- a shooting rampage being probed as a hate crime.

The carnage at the Emanuel African Methodist Episcopal Church in the southeastern US city was one of the worst attacks on a place of worship in the country in decades, and comes at a time of lingering racial tensions nationwide.

Dylann Roof -- a slight man with a bowl haircut and a youthful face -- was taken into custody in neighbouring North Carolina, about a four-hour drive from the scene of the shooting, Charleston Police Chief Gregory Mullen said.

"I do believe it was a hate crime," Mullen said.

Members of the church&39;s mainly black congregation had gathered on Wednesday evening for a Bible study meeting when the shooter walked into the building, sat for about an hour and then opened fire, Mullen said.

Three men and six women were killed, and several other people were wounded. Among the dead was the church&39;s pastor Clementa Pinckney, who was also a Democratic state senator.

Side streets around the church were sealed off with yellow crime scene tape. A police officer told AFP that some of the bodies of the victims were still inside.

A support centre for relatives of the victims was set up in a nearby hotel.

"The heart and soul of South Carolina was broken," a tearful state Governor Nikki Haley said.