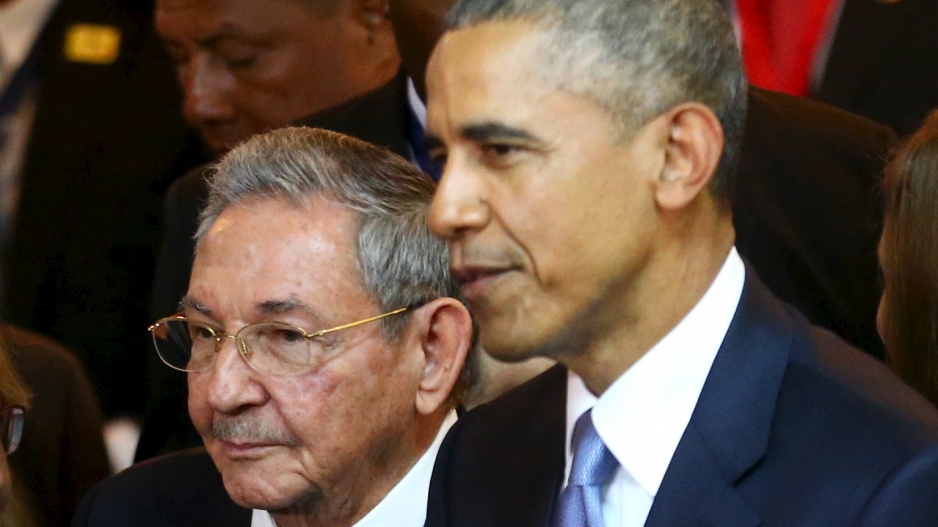 Cuba's President Raul Castro (L) stands with his U.S. counterpart Barack Obama before the inauguration of the VII Summit of the Americas in Panama City April 10, 2015.

HAVANA -- President Barack Obama will hold rare talks with his Cuban counterpart Raul Castro on Monday in Havana, setting aside a more than half-century bitter standoff between the United States and the communist island.

The meeting in the Cuban capital&39;s Palace of the Revolution is only the third formal encounter between Obama and the brother of Fidel Castro, who handed over the presidency in 2008.

At stake is the historic shift to end the Cold War conflict, which has seen Washington try to bring Cuba to its knees through an economic embargo, while Havana, a close Soviet ally, became enemy territory.

Obama, who arrived Sunday with his family, is the first US president to touch down on the island, barely an hour&39;s flight from Florida, in 88 years.

As Air Force One landed in Havana, Obama cheerfully began the landmark trip by tweeting in local slang: "Que bola Cuba?" -- or "What&39;s up?"

Later he noted that the last US president to come, Calvin Coolidge in 1928, needed three days to make the trip by train and navy ship.

"This is a historic visit," he remarked to staff at the freshly reopened US embassy in Havana.

The trip has been touted mostly for its huge symbolic value, and comes more than a year after Obama and Castro surprised the world in December 2014 by announcing that their countries would begin normalizing relations.

"The presence of a US president on the island for the first time since the 1959 revolution marks a transcendental change in relations between the US and Cuba," Michael Shifter, head of the Inter-American Dialogue think tank in Washington, said.

But some tough issues are up for discussion.

Although the embargo can only be lifted by Congress, where Republicans are far less keen on rapprochement, the Obama administration is chipping away at the edges of the sanctions.

For example, a trickle of US visitors over recent years is soon expected to turn into a flood with the lifting of an onerous requirement that they go to Cuba as part of pre-approved groups.

But while pushing for an easing of the decades-long sanctions regime, the White House continues to press for greater human rights in a country where the Communist Party maintains its grip on every key institution and little dissent is tolerated.

Just hours before Obama&39;s arrival Sunday, police in Havana arrested dozens of people from a banned group demanding greater human rights. Several had been freed by the end of the day and the rest were expected to be released shortly.

"I don&39;t think Obama&39;s visit will have an immediate impact on Cuban politics, much less on the near-term decisions of the regime," Shifter said.

"Full normalization will take a lot of time and will be a complex process. To advance, the US Congress needs to go further in lifting the embargo and Cuba needs to speed up its political and economic opening and improve its human rights."

A heavy police presence was evident when Obama went on his first official event, a visit to the beautifully restored Havana Old Town late Sunday. Plainclothes agents swarmed through the narrow streets and access to ordinary Cubans was all but impossible, leaving the neighborhood eerily empty.

"Maybe they let me come here because they think I&39;m a tourist with my backpack," said civil engineer Ariel Hernandez, 42, who was trying to get a glimpse of the president.

On Tuesday, Obama will meet with a few human rights activists. He will also give a speech -- the main set piece of his trip -- that will be carried live on Cuban television, an unprecedented concession from the authorities.

He will round off the trip by attending a baseball game between the Cuban national team and Major League Baseball&39;s Tampa Bay Rays.

Although meant to be a celebration of shared love for the game, the occasion will also highlight yet another cause of tension: the talent drain of Cuban stars attracted by the lure of the big-money US circuit.

In another major piece of Latin American business, US Secretary of State John Kerry, who is traveling with Obama, was due to meet separately Monday with representatives of the Colombian government and the Marxist FARC rebels, according to a Colombian negotiator.

They have been negotiating in Cuba since 2012 to end their more than 50-year war. Both sides have acknowledged that a Wednesday deadline they had set themselves will pass without the signing of a final accord.