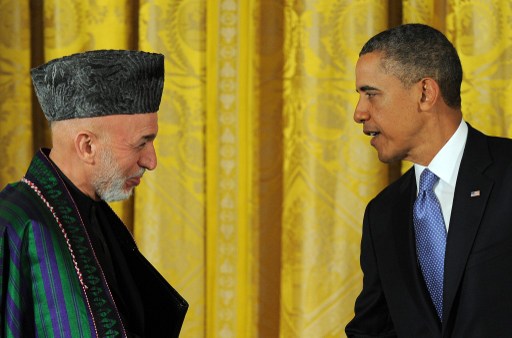 US President Barack Obama and Afghan Hamid Karzai leave after a press conference. They reiterated their support for an office in Doha for the purpose of negotiations between the Afghan High Peace Council and the Taliban.

Washington - President Barack Obama and Afghan leader Hamid Karzai support the idea of holding talks with the Taliban in its Qatar office, the White House said Tuesday, reviving hopes for a peace process.

The announcement came despite a brazen Taliban assault on the Afghan presidential palace in the heart of Kabul Tuesday, in which three security guards and all five assailants were killed in an hour-long gun battle.

In a video call, the two leaders agreed that "an Afghan-led and Afghan-owned peace and reconciliation process is the surest way to end violence and ensure lasting stability in Afghanistan and the region," the White House said.

"They reiterated their support for an office in Doha for the purpose of negotiations between the [Afghan government&39;s] High Peace Council and authorised representatives of the Taliban."

Obama appeared to have persuaded Karzai to renew peace efforts after the Afghan leader&39;s furious response to the Taliban&39;s portrayal of its newly opened Qatar office as the headquarters of a state-in-exile.

US envoy James Dobbins said Monday that Washington was also "outraged" at how the Taliban opened the office, which had been intended as a first step towards a peace deal to end the decade-long war in Afghanistan.

The Taliban opened the office under the rebel group&39;s white flag and referred to themselves as the "Islamic Emirate Of Afghanistan," the name of their hardline 1996-2001 regime.

The flag and the name triggered a diplomatic bust-up that derailed an early stage of efforts to start peace talks as the US-led NATO combat mission winds down 12 years after the Taliban were ousted.

The Afghan government, which has said it is still committed to the peace process, insists the Taliban&39;s office in the Gulf state must only be used for direct talks with Karzai&39;s appointed negotiators.

The contentious sign, flag and flagpole unveiled at the opening of the office last Tuesday have now been moved.

On Tuesday Dobbins arrived in Islamabad for talks with Prime Minister Nawaz Sharif and other senior officials on efforts to launch negotiations with the Taliban, which have long maintained rear bases in Pakistan.

The prime minister&39;s office said he had told Dobbins that "Pakistan had the highest stakes in the return of peace and stability to Afghanistan."

Although Islamabad is at war with the Pakistani Taliban, it has long been accused of quietly sheltering the Afghan Taliban battling US forces across the border and is seen as a key player in any future peace effort.

Karzai, furious over the way the Taliban office was opened, also broke off Afghan-US talks on an agreement that could allow Washington to maintain soldiers in Afghanistan after the NATO combat mission ends.

It said the two leaders had discussed the negotiation of a Bilateral Security Agreement but did not say when the talks might be resumed.

In the video call, the two leaders also discussed preparations for Afghanistan&39;s 2014 elections.

"The two presidents reaffirmed that free, fair, and credible elections would be critical to Afghanistan&39;s future," the White House said.